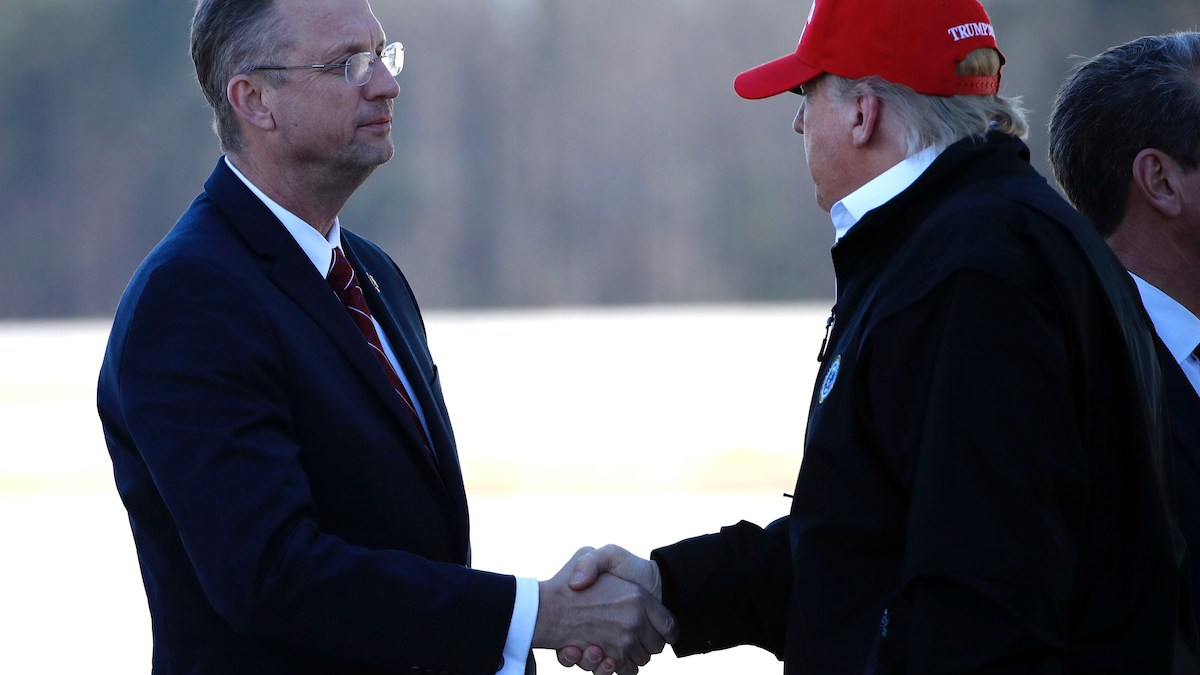 At the Pentagon, top military brass have been begun “social distancing” to avoid spreading disease. On Capitol Hill, lawmakers have been encouraged to forgo hand shakes and Congress shut the U.S. Capitol and House and Senate office buildings to the public until April 1.

But at the White House, President Donald Trump has flouted his own government’s advice on how to stay safe. As the fast-moving coronavirus edged into more U.S. states, Trump continued to shake hands with supporters and visitors, hold large events and minimize the threat posed by an outbreak that has infected more than 127,000 people and killed over 4,700 worldwide.

Trump has already had personal contact with several individuals known to have been exposed to the virus. They include Florida Rep. Matt Gaetz, who traveled aboard Air Force One with the president on Monday and found out mid-flight that he was among a handful of GOP lawmakers who were exposed to a person who tested positive for the virus after last month’s Conservative Political Action Conference.

Trump ally, Rep. Doug Collins, R-Ga., who also had contact with the same person at CPAC, was pictured shaking the president’s hand Friday when Trump visited the Centers for Disease Control and Prevention’s Atlanta headquarters.

Gaetz and Collins have voluntarily quarantined themselves, as has several other legislators who had contact with the infected person at the conservative conference, including Trump’s incoming chief of staff.

During his weekend in Florida, Trump hosted Brazilian President Jair Bolsonaro at the Mar-a-Lago resort. Bolsonaro was joined by his communications director, Fábio Wajngarten, who tested positive for coronavirus just days after returning to Brazil. Wajngarten posted a photo of himself posing beside Trump and video from the event also showed him standing directly behind both presidents as they spoke to the crowd.

It marks the first time that someone known to have the virus was in close proximity to the president.

But despite all that, Trump continued Thursday to play down concerns that he may have already been exposed to individuals infected by the coronavirus and the White House said the president does not plan to be tested or go into self-quarantine.

White House press secretary Stephanie Grisham said in a statement Thursday that “exposures from the case are being assessed, which will dictate next steps.”

“As stated before, the White House Medical Unit and the United States Secret Service has been working closely with various agencies to ensure every precaution is taken to keep the First & Second Families, and all White House staff healthy,” Grisham said.

Grisham said that under U.S. Centers for Disease Control and Prevention guidelines, “there is currently no indication to test patients without symptoms, and only people with prolonged close exposure to confirmed positive cases should self-quarantine.”

Republican Sen. Rick Scott of Florida, who met Bolsonaro in Miami, said he will self-quarantine despite believing his personal risk is low.

Public health officials said Trump was sending the wrong message with his behavior and potentially putting the public at risk by sowing confusion and undermining efforts to keep people safe, especially if the situation grows worse.

“I think it’s beholden upon our leaders to follow the public health recommendations that the CDC, the government, public health are recommending and to emulate those practices,” said Dr. Jason Farley, a nurse epidemiologist and professor at the Johns Hopkins School of Nursing. He said that it sends “mixed messaging to the public” when recommendations aren’t heeded.

NBCLX’s Clark Fouraker caught up with Dr. Daniel J Barbaro from the Texas Centers for Infectious Disease Associates to examine the spread of the coronavirus using the board game “Pandemic.”

When it comes to Trump, he added, “There’s nothing special about being the president of the United States that protects you from a virus like this unless you’re following the practices recommended for every 70-year-old.”

Trump, at 73, is considered at higher risk, although his press secretary said Monday he “remains in excellent health.”

Trump has repeatedly played down the risk, both to the public and himself, even as he claims that his administration is “taking this unbelievably seriously.”

“It will go away. Just stay calm,” Trump told reporters Tuesday. “Everybody has to be vigilant and has to be careful. But be calm. It’s really working out. And a lot of good things are going to happen.”

After a week of mixed messages and false starts, and as government officials warned in increasingly urgent terms that the outbreak in the U.S. will only get worse, the administration suddenly seemed poised to act.

Former Vice President Joe Biden discusses how he would handle the coronavirus pandemic if he was elected president.

On Wednesday evening, Trump, in a rare Oval Office address to the nation, announced he is sharply restricting passenger travel from 26 European nations to the U.S. He blamed Europe for not acting quickly enough to address the “foreign virus” and claimed that U.S. clusters were “seeded” by European travelers.

After Trump spoke, the White House cancelled a planned trip by the president to Nevada and Colorado this week “out of an abundance of caution.” Trump’s reelection campaign also postponed a planned March 19 event in Milwaukee that was set to feature the president.

For most people, the new coronavirus causes only mild or moderate symptoms, such as fever and cough. But for some, especially older adults and people with existing health problems, it can cause more severe illnesses, including pneumonia.

The Centers for Disease Control and Prevention urges those at higher risk of getting the virus to take “everyday precautions to keep space between yourself and others,” avoid crowds, handshaking and nonessential air travel.

“During a COVID-19 outbreak in your community, stay home as much as possible to further reduce your risk of being exposed,” the CDC writes.

Overall, the CDC has suggested that workplaces encourage employees to stop shaking hands, use videoconferences for meetings when possible and hold meetings in well-ventilated spaces if meetings are necessary.

That hasn’t happened at the White House, where Trump, a self-professed “germophobe,” sat shoulder-to-shoulder Wednesday with aides and banking executives, traveled to Capitol Hill Tuesday for a Senate lunch and later in the day awarded the Presidential Medal of Freedom at a well-attended ceremony, where he also shook hands with those in the front row.

The White House has suspended tours and some visitors to the building have been asked to report where they’ve traveled recently — though many who interact with the president regularly have received no kind of heightened screening.

Elsewhere across government, the response has been more robust. At the Pentagon, Defense Department officials have been sitting at least six feet apart, in line with health guidance. On Capitol Hill, Democratic lawmakers were barred from helping themselves to a breakfast buffet or touching serving utensils, and told to avoid kissing, hugging and shaking hands.

But not Trump — a pattern that Robert Blendon, a professor of health policy at the Harvard T.H. Chan School of Public Health and the Harvard Kennedy School of Government, said appeared motivated by Trump’s desire to protect the economy in an election year.

“Right or wrong, the president’s decided he wants to minimize the economic impact of this pandemic. … He’s trying to do everything he can to protect the economy by saying, ‘It will be over,’ ‘It’s not that bad,’ ‘Feel free to go places,'” Blendon said. While much uncertainly remains, “if it turns out to be more serious, the president’s contributing to people not protecting themselves.”

“The president should be keeping us safe. He shouldn’t be amplifying the risk,” added Gostin of Georgetown University.

“The message should be: Let’s have social distancing, let’s avoid the usual cultural symbols of shaking hands, let’s separate from one another and avoid either contracting or transmitting a very dangerous infection,” Gostin said. “And it’s baffling to me that the president, who should be the model of good behavior, is modeling exactly the opposite.”