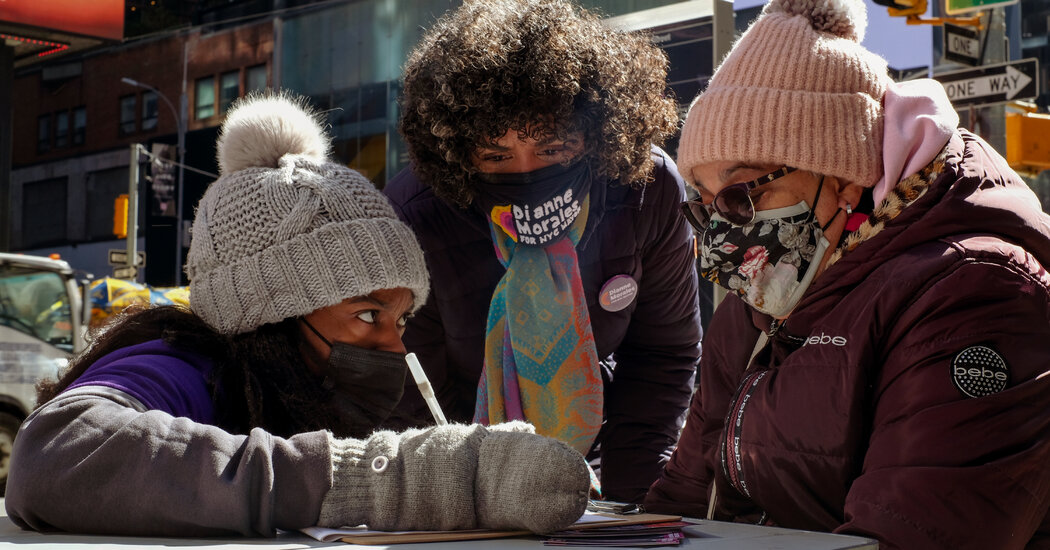 Two staff members have quit, two have been fired and four others involved in a unionization drive have been terminated.

The Rev. Al Sharpton hosted a mayoral forum in Harlem on Tuesday night in preparation for his expected endorsement in the Democratic mayoral primary. All the leading candidates were in attendance, save for one — Dianne Morales, who cited a “family emergency.”

In reality, she was meeting with her staff as her progressive grass-roots campaign began to implode.

The internal strife is a significant distraction or worse for Ms. Morales, 53, who has been able to attract a large number of small donors and an avid group of supporters as the most left-leaning candidate in the field. But the uproar over the unionization effort and complaints of a toxic workplace suggested that her campaign had fallen far short of progressive values.

There is no indication that Ms. Morales will drop out of race. But on Thursday evening, Farudh Emiel Majid, a senior organizer for the candidate, called on her to suspend her campaign, saying she had created “a hostile work environment towards Black and Brown staffers.”

Over five hours at the meeting Tuesday night — after the first resignation, of Ms. Morales’s campaign manager, Whitney Hu — the candidate listened to staff members share grievances about harassment, race-based mistreatment and exploitation and call their working environment toxic. Employees told her they felt siloed; work felt repetitive and unstructured.

Staff members in attendance called the meeting “candid” and “raw” and said Ms. Morales spoke at length about the challenges of her unique candidacy: She is an Afro-Latina first-time candidate running to the far left of her peers, and her campaign is heavily reliant on public funds.

She also spoke about the challenges of the recent explosive growth of her team — from half a dozen people to around 80, in just a few months. Ms. Morales openly accepted her role in the creation of any strife that might have taken place.

It wasn’t enough. Ifeoma Ike, a senior adviser, resigned early Thursday, leaving the campaign in even deeper chaos, with less than a month to go before the Democratic primary election on June 22.

Ms. Hu and Ms. Ike’s exits followed concerns over two other staff members accused of mistreatment: one who staff members said used a previous professional relationship with Ms. Morales to try to impose authority in an abusive manner, and another accused of making female staffers uncomfortable, according to three staff members who did not want to be identified for fear of retaliation.

Krysten Copeland, a campaign spokeswoman, said on Thursday that two campaign staff members, Ramses Dukes and Amanda van Kessel, had been dismissed. She said they were the employees accused of misconduct. Ms. van Kessel had previously worked with Ms. Morales at the social services arm of Phipps Houses, a housing development group. Mr. Dukes could not be reached for comment, and Ms. van Kessel did not respond to requests for comment.

In her statement, Ms. Morales addressed the issues in her campaign.

“Our campaign works to intentionally center the voices of those who are excluded from politics,” the statement read, “and we acknowledge that mistakes have been made in our attempts to do this.”

In response to the recent allegations of misconduct, staff members had launched a unionization effort that they said was intended to rectify what many considered a toxic work environment, as well as to codify the progressive principles that were espoused in Ms. Morales’s campaign — but not, they said, within her workplace. According to the union, the union has majority support, and Ms. Morales has voluntarily recognized it.

But on Thursday, four staff members involved in the unionization effort were terminated minutes before a scheduled meeting to discuss the collective’s demands.

“It is deeply disappointing that a candidate who claims to support unions refused to engage in this conversation,” the employees who had formed the union said in a statement.

Ms. Copeland said that the candidate had not known that the terminated employees were involved in unionizing. She did not immediately explain why the four were fired.

Ms. Morales said on NY1 on Thursday night that the unionization drive was “a beautiful and messy thing” and added: “I think it’s a reflection of a very transformative campaign that we have been running that they’ve organized this way, and I’ve been fully supportive of that from the moment it was raised to me.”

Union organizing had begun in earnest after Ms. Hu and Ms. Ike resigned.

“I officially resigned from the Morales campaign on Tuesday on my own accord after demanding that I would no longer be able to continue on the campaign until harmful actors were removed,” read a statement from Ms. Hu. “I continue to stand in solidarity with the team.”

Early Thursday morning, Ms. Ike said on Twitter: “I am formally resigning from the campaign as it no longer aligns with my values.”

According to several staff members, tensions in an already fraught campaign rose in recent weeks after some employees approached Ms. Hu with personnel complaints, including those about the colleagues they accused of being abusive.

Ms. Hu and Ms. Ike were the most senior staff members of the group that took these concerns to Ms. Morales, and the two said that if the candidate did not sufficiently address the complaints, they would quit, according to several staffers familiar with the exchange.

But Ms. Morales did not respond as they expected. The staff member who was accused of abusing power was demoted twice, then terminated on Sunday.

A team-building consulting firm was brought in and introduced an externally created code of conduct that employees were expected to adhere to, a departure for a team that prided itself on open communication and collaboration.

Staff members met on Monday to discuss growing concerns, but Ms. Morales, while invited, did not attend.

On Tuesday, Ms. Morales encouraged campaign staffers to practice “self-care.” On Wednesday, campaign headquarters were closed. Some returned to the office to find that the access code had been changed, and they could no longer gain entry. A Wednesday press event for New Yorkers for Racially Just Public Schools was canceled with little warning.

“To be honest, it doesn’t look good,” said Gina White, a Harlem resident who came to the schools event, hoping to hear the candidate speak. “At least if she wasn’t here, she should’ve sent someone from her campaign staff to represent and give a statement.”

In a statement released on Thursday, Ms. Morales again addressed the issues arising in her campaign, saying that she took swift action when allegations of misconduct arose.

“By making these changes, it is my hope and responsibility to guide our team through the last stretch of this race in a way that espouses our values of honesty, transparency and loving disruption,” she wrote.