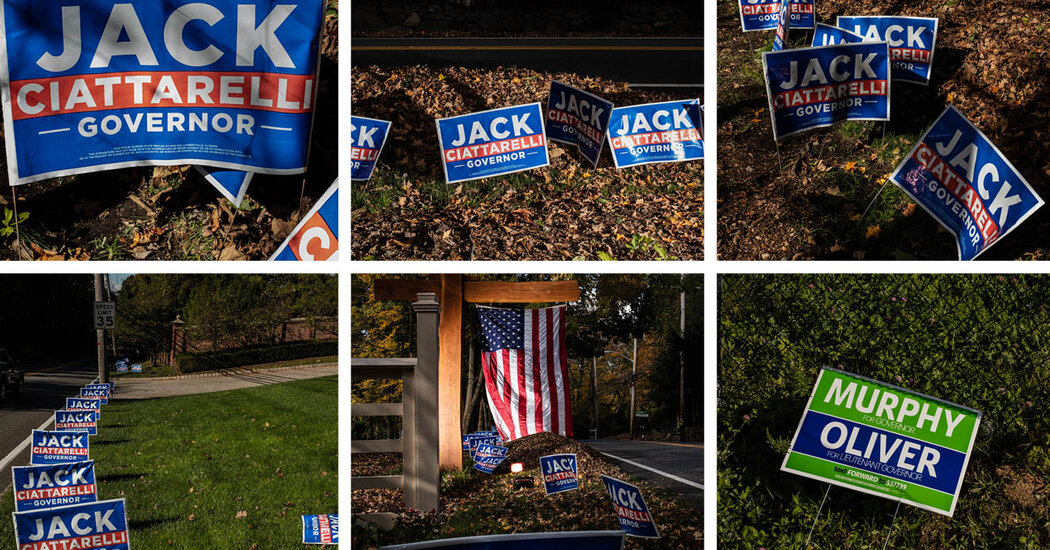 I told people on Monday that I thought Jack Ciattarelli would do better in the race for governor of New Jersey than the polls were indicating. My unscientific rationale was that Mr. Ciattarelli, the Republican challenger, had many more lawn signs than Gov. Phil Murphy where I live, northeastern Bergen County. I would estimate that Mr. Ciattarelli had at least 10 times as many signs.

Mr. Ciattarelli did lose, but by only about 1 percentage point, defying a Rutgers-Eagleton poll showing him 8 percentage points down in late October. That didn’t make my lawn sign theory correct, of course. But the result was surprising. So I decided to look into the matter more closely.

One theory might be that lawn signs influence election outcomes by increasing candidates’ name recognition. There might have been some of that going on. A 2016 study in the journal Electoral Studies by Donald Green, a political scientist at Columbia University, pooled the results of four experiments that involved placing lawn signs in randomly selected voting precincts and found that the signs had a small but not negligible effect — “probably greater than zero,” as he put it, “but unlikely to be large enough to alter the outcome of a contest that would otherwise be decided by more than a few percentage points.”

Another theory might be that lawn signs are a sensitive indicator of voters’ preferences: If you care enough to have a sign in your yard, you probably care enough to vote for the candidate and maybe get others to do so. (Handmade signs presumably convey even more conviction.) In the 2016 presidential race, Michael Koenig of ABC News saw signs that Donald Trump would win — literally, about 20 lawn signs for every Hillary Clinton sign he encountered while bicycling through the countryside of swing states such as Ohio and Pennsylvania.

Professor Green told me by email that there is “a long history of trying to use the preponderance of lawn signs as a quasi poll to predict outcomes.” One study he sent me, from a 1979 issue of the journal Political Methodology, analyzed seven political races in a small, unnamed California city in 1978. It found that “candidates with the greatest number of signs received the greatest number of votes in six of the seven races.”

In the U.S. presidential election of 2012, another study, by an undergraduate researcher at the University of Wisconsin, Eau Claire, found a high correlation in Eau Claire between the numbers of lawn signs for Barack Obama and Mitt Romney and the candidates’ vote totals by ward.

I’d call that research inconclusive. What’s conclusive is the sea change in the vote in northeastern Bergen County between the presidential election of 2020 and this year’s election for state and local offices. Using data from the Bergen County Board of Elections, I totaled up the votes from seven of the county’s 56 boroughs: Alpine, Closter, Cresskill, Demarest, Northvale, Norwood and Tenafly. These boroughs range from prosperous to outright rich. (The median listing price of houses for sale in Alpine is $5.7 million, according to Realtor.com.)

To me that says two things: Mr. Trump is highly disliked in the area, and Mr. Ciattarelli didn’t suffer by association with him. Mr. Ciattarelli’s signature issue was cutting taxes and reallocating state school aid, which now largely goes to troubled urban schools, to what he described as “struggling suburban, shore area and rural schools.”

I’d like to say that my lawn sign detector was picking up on that big swing in voter preference. On Wednesday, though, I came upon another possible explanation for the profusion of Ciattarelli signs. I spoke with Richard Kurtz, a wealthy real estate investor who owns property in Alpine. He’s the chief executive of the Kamson Corporation of Englewood Cliffs, N.J., which owns and operates apartment complexes in Connecticut, New Jersey, New York and Pennsylvania. He told me that he bought more than 100,000 Ciattarelli signs and had them put up all over the state, including on his own apartment properties.

“I met Jack four or five months ago and I said, ‘This is a solid citizen,’” Mr. Kurtz told me. “His keen interest in the state. Everything he wants to do is positive, most of all lower taxes and do the right thing.”

As for the signs, he added: “For some reason I always remember in my experience of voting, lawn signs are so special. If I had more time and energy, I would have liked to do even more.”

Mr. Kurtz said that a man who works for him part-time put up dozens of signs on a heavily traveled stretch of Closter Dock Road in Alpine where Mr. Kurtz owns a sprawling property once owned by descendants of the industrialist Henry Clay Frick. It was that stretch of signage that first caught my attention. “They probably overdid it here in Alpine,” Mr. Kurtz said with a laugh.

When I told Professor Green about the Kurtz blitz, he thought of comparing vote totals in precincts where Mr. Kurtz put up signs on his properties with precincts where he didn’t to see if the signs made a difference. “That would be a lot of fun,” he said, imagining getting a nice research paper out of it. But since Mr. Kurtz spread the signs all over the state, that experiment won’t be possible.

What originally looked to me like an indication of a groundswell of support for Mr. Ciattarelli doesn’t look so grass-roots anymore. On the other hand, Mr. Kurtz wasn’t responsible for all of those Ciattarelli signs I spotted. I’d say my lawn sign theory may still have something to recommend it.

Peter Coy (@petercoy) writes a regular newsletter about economics for Opinion. You can sign up for his newsletter here.