Veterans Affairs Secretary Robert Wilkie, under investigation for allegations that he sought to discredit a congressional aide who said she was sexually assaulted in a VA hospital, has denied seeking out damaging information about the woman.

Specifically, Wilkie denied ever discussing the woman, Andrea Goldstein, with Rep. Dan Crenshaw, a Texas Republican whose service in the Navy overlapped with Goldstein’s.

“There was no discussion about Ms. Goldstein,” Wilkie’s spokeswoman, Christina Noel, said in February in response to questions from ProPublica about whether Wilkie and Crenshaw had talked about Goldstein. The statement issued by Noel was personally reviewed by Wilkie, according to internal emails obtained through the Freedom of Information Act.

But an email described to ProPublica by two agency officials who have seen it shows there was a conversation between Wilkie and Crenshaw about Goldstein. The officials spoke about the email on the condition of anonymity because they were not authorized to describe or disclose it.

In the email, sent to his chief of staff, Wilkie said Crenshaw told him something about a staffer for House veterans committee Chairman Mark Takano, D-Calif., referring to Goldstein. The email does not say what Crenshaw told Wilkie about Goldstein. Goldstein and Crenshaw were on the same deployment in the Middle East in 2013-14, according to Goldstein’s lawyer, Mark Zaid.

In a statement on Sunday, Noel said there was nothing improper about the conversation and again denied that Wilkie was seeking dirt on Goldstein.

“The only thing these emails prove is that Sec. Wilkie had discussions about a VA-related issue that was in the news and under congressional scrutiny,” Noel said. “The notion that doing so is somehow wrong is bizarre.”

Noel’s latest statement also seems at odds with Crenshaw’s account. In February, he told ProPublica, “I’ve never been asked about the case, never been told about the case.” Crenshaw’s spokesman, Justin Discigil, said on Sunday the congressman stands by his statement. “The truth hasn’t changed,” Discigil said. “The VA never contacted Rep. Crenshaw to dig up dirt on this staffer.”

Noel said her earlier denial wasn’t false because it referred to a meeting between Crenshaw and Wilkie in the secretary’s office. That meeting took place later in the month, on Dec. 19. Noel said it was about “possible inequities in the VA disability compensation system.”

Documents obtained through the Freedom of Information Act reveal the hand-wringing over how Wilkie and his aides wanted to respond to questions about the secretary’s discussions with Crenshaw. James Hutton, the assistant secretary for public affairs, recommended answering, “At the meeting there was no discussion about Ms. Goldstein.”

In response, Wilkie asked what response Crenshaw had given to ProPublica. “Did Crenshaw say he did not talk about it,” Wilkie wrote.

The Dec. 4 email also undermines a denial by the Wilkie aide who received it, Pam Powers. Powers was Wilkie’s chief of staff at the time; President Donald Trump has since promoted her to acting deputy secretary.

“The secretary is the most ethical, decent, honorable man I have ever known,” Powers told The New York Times in February. “At no time did the secretary ever direct, discuss or insinuate that somebody should investigate Ms. Goldstein’s background.”

Noel said Powers stands by her statement. “The email simply indicates a discussion was had, not that an investigation took place,” Noel said.

Exactly what transpired between Wilkie and Crenshaw is now part of a probe by the VA’s inspector general. The investigation is examining allegations, first reported by ProPublica, that Wilkie’s conversation with Crenshaw was part of a shadow investigation to dig up dirt on Goldstein that could be used to undermine her report of a sexual assault at the VA medical center in Washington, D.C., in September.

The inspector general, Michael Missal, initially told lawmakers “This matter is a high priority for our office.” However, the COVID-19 pandemic has prompted the office to largely sideline its other investigations to focus on the VA’s response to the crisis, which has killed 435 patients in the health system so far. A spokesman for Missal said the Wilkie investigation “remains part of the ongoing oversight work for our office.”

Wilkie has not been interviewed, Noel said.

In his denial in February, Wilkie acknowledged that the conduct that was alleged would be improper. “I never would do that to a fellow officer,” he said in February. “It is a breach of honor.”

On Sunday, Noel provided a statement from another senior adviser, Christine Bader, who said she never heard any discussion about searching for information to disparage Goldstein. “Had this come up, I would have immediately voiced my objection,” Bader said in the statement. 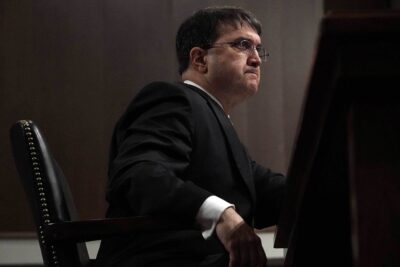 The inspector general’s investigation is unfolding at a sensitive time for Wilkie, who leads the federal government’s second-largest department and the nation’s largest hospital system in the middle of a pandemic. Besides this investigation, Wilkie was already facing criticism for appearing disengaged from the department’s many critical issues. As the coronavirus crisis struck in mid-March, Wilkie took three days off, according to his calendar, which was obtained through FOIA. (Noel said it was a family matter.) He has dismissed mounting evidence that VA hospitals had shortages of protective gear, which the department’s health chief eventually acknowledged. (Noel said the VA is following the Centers for Disease Control and Prevention’s guidance on protective equipment.)

Trump made appealing to veterans central to his 2016 campaign, but during his presidency the VA’s leadership has been in constant turmoil. Three of the department’s top six positions currently lack a permanent, Senate-confirmed officeholder.

Emails and notes obtained through FOIA reveal new details about Wilkie’s handling of Goldstein’s case. While some VA officials appeared compassionate toward Goldstein, Wilkie and some of his closest aides took a more skeptical view.

Goldstein’s complaint was investigated by the VA inspector general, working with federal prosecutors, as required by department regulations. Wilkie, however, did not stand by while the investigation ran its course.

Emails obtained through FOIA show that Wilkie’s team was inquiring about surveillance footage. “Any news on the video footage?” a senior adviser, Tammy Czarnecki, said in a Sept. 23 email. “The 10th floor is waiting for an answer.” The “10th floor” refers to the executive suite where the VA secretary and other political appointees have their offices.

Noel, the spokeswoman, said VA leaders wanted to know if there was footage for the police and inspector general to review. “This would have happened with any high-profile allegation,” she said. Czarnecki didn’t respond to requests for comment.

The recording was unavailable: When investigators pulled the camera’s memory card, it was empty. The camera had not been plugged in correctly, so it didn’t have power, according to an email from an agency auditor.

Police were able to retrieve footage from a camera in the lobby, but “it was not enough to confirm the allegations,” an employee reported in another email. The lack of video evidence would make it difficult for prosecutors to prove a criminal charge beyond a reasonable doubt.

On Jan. 14, the deputy attorney general, Jeffrey Rosen, informed James Byrne, then the VA’s deputy secretary, that the U.S. attorney’s office in Washington decided not to prosecute the case, according to Byrne’s handwritten notes from the call. The rest of Byrne’s notes are redacted.

Byrne and Powers had a conversation on the same day with Missal, the inspector general, according to Byrne’s notes. The page is mostly redacted, but by Missal’s account, he “specifically told them that the investigation had been closed without charges and that no other characterization could or should be made regarding the outcome of the investigation. Reaching a decision to close the investigation with no criminal charges does not mean that the underlying allegation is unsubstantiated.”

Wilkie and some of his aides drafted a letter to inform Takano about the outcome of the investigation. Despite what Missal had told Byrne and Powers, the letter included a line calling Goldstein’s complaint “unsubstantiated” and warning that it could deter other veterans from seeking care. Aides suggested cutting that line, according to tracked edits circulated on Jan. 15.

The documents released through FOIA do not say why advisers wanted to remove that line, but people familiar with the discussions said officials were aware that Goldstein’s allegation was not found to be “unsubstantiated” and that characterizing it as such would be viewed as disparaging her and discouraging victims from reporting sexual abuse.

“Would attached version be a bit more acceptable?” an agency lawyer wrote, according to a person familiar with the email, which was released through FOIA in a redacted form.

But Wilkie decided to keep the word “unsubstantiated” in the final version.

When they received the letter, House Democrats said the term was shockingly insensitive. Missal said it was “not an accurate description of the results of our investigation.”

Goldstein called Wilkie’s letter “public retaliation and gaslighting” in an op-ed published on Feb. 3. “He was implying that I was a liar,” she wrote.