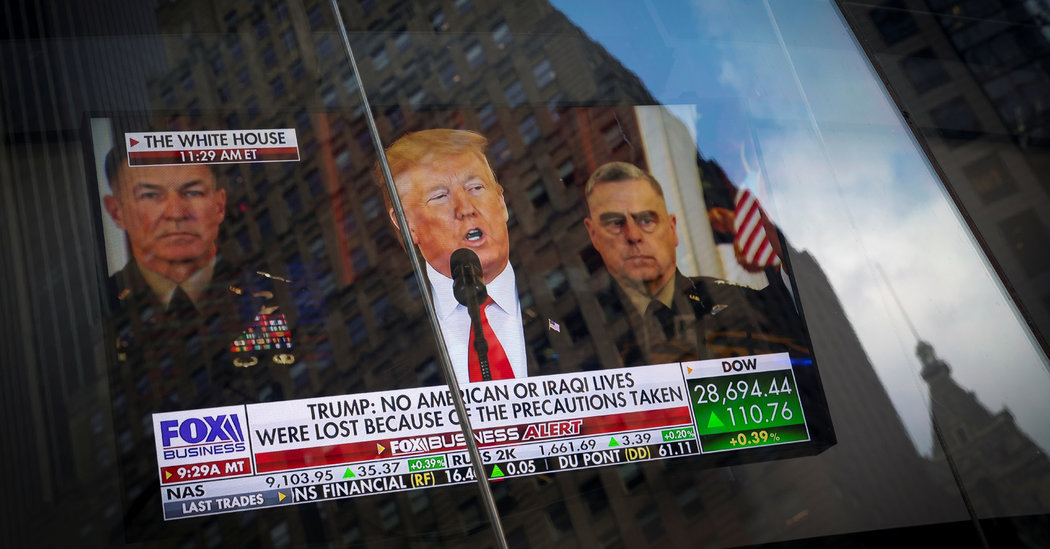 When I step back and get some distance on this latest clash between President Trump and Iran’s supreme leader, Ayatollah Ali Khamenei, it becomes obvious to me that what we have here are two bald men fighting over a comb.

We have two old men, with old ideas, fighting over a country that neither should want — Iraq — and over a 20th-century resource — oil — that is decreasingly relevant to a 21st-century nation’s economy and for a strategic goal — to dominate the Middle East — that no sane leader should want to achieve, because all that you win is a bill.

In short, it’s just so much fury that will change so little.

Which is why, when I hear Fox News’ flag-waving commentators claiming that those who don’t support Trump in his careening around the Middle East are being unpatriotic, I want to burst out laughing, because it is so pathetic.

And when I watch tens of thousands of Iranians take to the streets to mourn the death of Maj. Gen. Qassim Suleimani — whose true legacy is mayhem in the nations around Iran and an enormous body count of young Iranians and Arabs seeking democracy — I want to burst out crying, because it is so pathetic.

When does this idiocy stop?

Data is the new oil. Who has it and how do you distill the insights from it, and then productize and monetize those insights, is the new economic driver that in the long run will determine a country’s wealth and security in the 21st century — not black crude. That is why former Saudi oil minister Sheikh Ahmed Zaki Yamani’s old warning — the stone age did not end because we ran out of stones; it ended because we invented new tools — is more relevant today than ever.

Both Trump and Khamenei will now each claim some sort of victory: Trump for killing an Iranian killer with lots of American, Arab and Iranian blood on his hands. (Suleimani got what he deserved.) And Khamenei for “retaliating” by launching 22 rockets at two bases in Iraq where American troops are stationed. (He saved some face.)

But let’s look closely at what each side actually “won.”

I suspect that the U.S. will get some improved deterrence from killing Suleimani — precisely because it went against the rules of the game as it had been played between the U.S. and Iran all these years: Don’t target each other’s leaders. The Iranian leadership now has to assume that Trump may be crazy and could react even more harshly and unpredictably in response to any further Iranian retaliation or escalation.

This is surely disorienting for Iran’s clerics. Iran and Suleimani always assumed that they could out-crazy everybody else through proxies and cutouts. They or their proxy Hezbollah could brazenly blow up the former prime minister of Lebanon, Rafik Hariri, or blow up a key Saudi Arabian oil pumping facility, and then turn around and say to the world: “Gosh, who did that? What a tragedy.”

Trump is the first U.S. president whom the Iranians worry they may not be able to out-crazy. Suleimani’s successors now know they will have to operate with much greater discretion and security concerns than did Suleimani, who thought he was attack-proof.

But while Trump may think he can out-crazy the Iranians, that is an illusion in the long run. Unlike Iran’s supreme leader, Trump will be constrained by our Congress, Constitution, free press, American codes of conduct and a coming election.

While he can talk big, and threaten loud, the fact is that dominating the Middle East is much more important to Iran than it is to the U.S. — especially now that America is the world’s largest oil producer and Americans are utterly exhausted with the Middle East — and Iran will always be there and we won’t.

In other words, America’s ability to out-crazy the Iranians is limited. We cannot afford to be assassinating every bad guy who crosses us. It would give license to other countries — like Vladimir Putin’s Russia — to do the same to his opponents and invite others to start targeting our leaders.

This gives Iran a lot of potential to “Carterize” Trump — that is, to do to Trump what Iran did to President Jimmy Carter: draw him into a Middle East mess, by just conducting small operations against American civilians or troops in the Middle East, forcing Trump to retaliate and sink deeper into the Middle East quagmire — at a time when the region has never been less important to America — or not respond and look weak.

The only win-win that matters is not one that gives a temporary political boost to Trump and Khamenei but one that serves the long-term interests of both countries — and that is restoring the Iran nuclear deal, which Trump pulled out of in May 2018.

It is a vital U.S. interest that Iran not acquire a nuclear weapon, because it would threaten Europe and U.S. allies in the region and because it would most likely prompt Turkey, Saudi Arabia and Egypt also to acquire nuclear bombs, making the unstable Middle East a nuclear powder keg. At the same time, it is a vital Iranian interest to get out from under Trump’s oil sanctions, which are bankrupting its economy.

But I question if Trump has the political courage to compromise with Iran; he keeps demanding too much. If he were smart, he’d use the fact that he has now restored, for the moment, some U.S. deterrence to immediately pivot to forging a simple, revised nuclear deal that would impose a permanent freeze on Iran’s nuclear weapons capacity, with even more intrusive inspections than levied by the original deal, in return for an end to the oil sanctions. And then call it a day. Don’t overreach.

We cannot order Iran not to meddle in other countries at the same time that we and Sunni Arab nations are doing so. Let’s just get a clean deal — end of Iranian nukes for end of sanctions — and handle the rest through traditional diplomacy and soft power.

Trump should be tweeting every day: “Hey supreme leader of Iran, which Arab Muslim country did you occupy today? How many Iranian democrats did you arrest or kill today? Which young Arabs did you deprive of democracy today? How many Iranian tax dollars did you spend funding Suleimani’s militias in Lebanon and Syria and Yemen today?” Every day. Every hour. Around the clock. Believe me, the Iranian regime, struggling to control its own citizens, would not like that.

And Trump should not be threatening Iran by sending more troops to Iraq to fight ISIS or to Afghanistan to fight the Taliban. That’s nuts!

Trump should be threatening Iran that if it does not pull back from trying to control Iraq, we will withdraw all our forces from the region — and leave it to Iran alone to fight ISIS and the Taliban — Sunni Muslim movements that are Iran’s archenemies.

That’s the best way to overstretch Iran and make it the most detested country in Iraq — where Iraqi Shiites have already burned down two Iranian consulates out of their hatred of being dominated by Iranians — not to mention the whole region.

So, dear reader, do not get caught up in today’s headlines or the Fox spin cycle. If you want to judge what Trump just did in Iraq, ask yourself these questions: Are we now consumed in fighting for yesterday’s economic assets or tomorrow’s? Are our tactics — targeted assassination — ones we can really repeat over and over or do we need to focus on the real win-win deal: a simple, clean, definitive nuclear agreement. Is our threatening to leave the region not more meaningful than vowing to double down there? And, finally, is our return to obsessing about the Middle East more in China’s interest or ours?