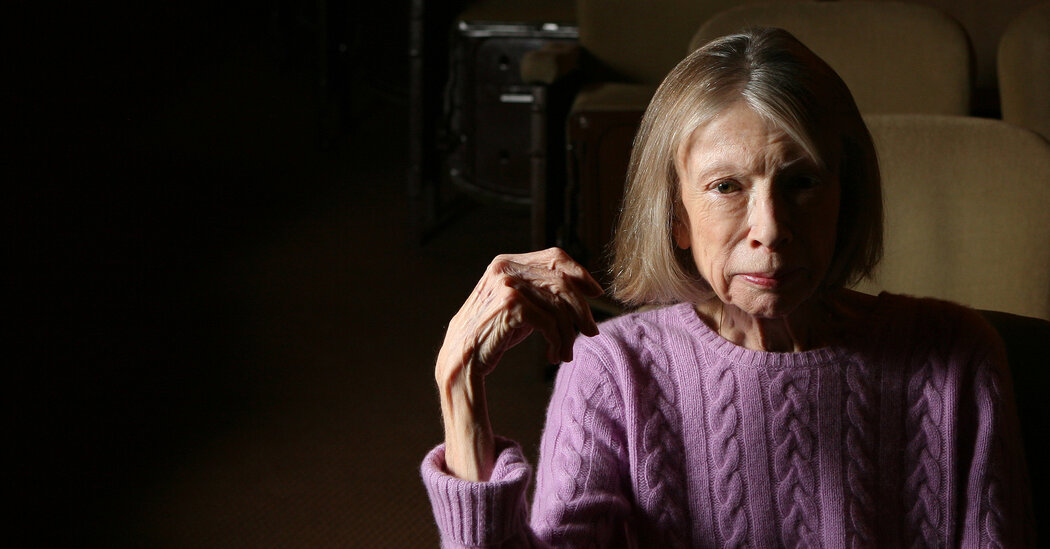 Joan Didion was a writer uniquely attuned to the disorder and fragmentation of our times, the dizzying changes overtaking America since the 1960s, when, as she wrote in “Slouching Towards Bethlehem,” lines from Yeats’s famous poem “The Second Coming” reverberated “in my inner ear as if they were surgically implanted there”:

Turning and turning in the widening gyre
The falcon cannot hear the falconer;
Things fall apart; the center cannot hold.

For Didion, who died on Thursday at 87, the late ’60s and early ’70s were a time of social and political tumult, abrupt leave-takings and random violence: the Manson murders and Altamont and young people pulling up stakes to wander the streets of Haight-Ashbury. She was uncannily attuned to the dark undercurrents of the day — the social fractures and divides that fueled carelessness and alienation. This is one reason Didion’s work resonates so deeply with us today. Once again, we are living in times defined by chaos and uncertainty, and what Didion called “the jitters” are settling in again, as we worry about Covid and climate change and police brutality and mass shootings at schools.

Congress cannot seem to pass legislation wanted by large majorities of people. Democracy itself is under threat with an all-out assault on voting rights by former President Donald Trump and his allies. QAnon followers — some wearing superhero costumes, horns and animal pelts and camo and sporting lots of tattoos — participated in the insurrection at the Capitol last January and more recently gathered near Dealey Plaza in Dallas to await the return of John F. Kennedy Jr., who died in 1999. Doctors and nurses are being threatened for dispensing Covid shots, and school board members are being assailed for supporting mask mandates. Sometimes it’s hard not to feel we are living through another surreal and dangerous iteration of Didion’s America, where “disorder was its own point.”

It turns out that Didion was also remarkably prescient in writing about the fracturing of truth as people increasingly filtered reality through the prism of their own prejudices. And decades ago, she was already pointing to the startling disconnect between much of the American public and the political and media elites who “invent, year in and year out, the narrative of public life” — a disconnect that today is fueling populist politics and partisan divides. In 2003 she wrote even more explicitly about how our political process not only spurns consensus but also works by “turning the angers and fears and energy of the few” against “the rest of the country.”

Narratives preoccupied Didion — because she was a novelist and screenwriter, as well as a journalist, and because writing had always been a means for her to impose order on a threatening and chaotic world. A frequent theme in both her fiction and her nonfiction is the story lines people construct about themselves and others, the ways in which they choose to connect (or not connect) the dots of personal or political events. In fact, Didion found in her own experiences and fears a mirror for what was happening in America.

“We tell ourselves stories in order to live,” Didion wrote in “The White Album.” “The princess is caged in the consulate. The man with the candy will lead the children into the sea.” People look “for the sermon in the suicide, for the social or moral lesson in the murder of five. We interpret what we see, select the most workable of the multiple choices. We live entirely, especially if we are writers, by the imposition of a narrative line upon disparate images, by the ‘ideas’ with which we have learned to freeze the shifting phantasmagoria which is our actual experience.”

Didion’s utterly distinctive writing style — distinguished by its spareness, its surgical precision, its almost staccato yet incantatory rhythms — was also a tool for containing her often harrowing subject matter, be it her own experiences of loss and grief, reportorial assignments involving murder or war, or the melodramatic situations that the heroines in her novels so often faced. She had an eye for the prophetic detail and telling gesture, an ear for the line of overheard dialogue that might reveal all.

Didion prized control — getting the details correct in a story, making sure a recipe turned out exactly right — because she often felt it was elusive in her life as someone who suffered from migraines and Parkinson’s and morning dread. “You are getting a woman who somewhere along the line misplaced whatever slight faith she ever had in the social contract, in the meliorative principle,” she wrote. She described herself as “a sleepwalker,” “alert only to the stuff of bad dreams, the children burning in the locked car in the supermarket parking lot,” the coyotes by the interstate, the snakes in the playpen.

What Didion called “the unspeakable peril of the everyday” became horribly personal in December 2003. On Christmas Day, her daughter, Quintana Roo Dunne, was diagnosed with pneumonia and the following day developed septic shock; days later, her husband of nearly 40 years, John Gregory Dunne, abruptly slumped over during dinner and was later pronounced dead of a massive heart attack. Quintana would die 20 months later at the age of 39.

Didion and Dunne had always written about their own lives — their marriage, their nervous breakdowns, their work as screenwriters in Hollywood — and she would chronicle her attempts to come to terms with the loss of her husband and daughter in two heart-stopping books, “The Year of Magical Thinking” (2005) and “Blue Nights” (2011). What happened to her family, she wrote, “cut loose any fixed idea I had ever had about death, about illness, about probability and luck, about good fortune and bad, about marriage and children and memory, about grief.”

In fact, Didion had become increasingly preoccupied with the disjunction between the narratives handed down by teachers and parents, and the realities of daily life. A fifth-generation Californian, Didion explained that her theatrical temperament was shaped by stories of the pioneers who settled California — stories that featured “extreme actions: leaving everything behind, crossing the trackless wastes, and in those stories the people who stayed behind and had their settled ways — those people were not the people who got the prize. The prize was California.”

That outlook informed Didion’s early essays in “Slouching Towards Bethlehem” (1968) and “The White Album” (1979), which frequently contrasted the austere values of California’s early settlers with the gaudy ones found in the new California of movie stars and haute cuisine. By the time Didion published “Where I Was From” in 2003, however, she’d become more conscious of the contradictions between the mythic narratives Californians cherished and the facts of the state’s actual history. She wrote about how entrepreneurial individualism belied a long reliance on federal land grants and subsidies (financed by the rest of the country’s taxpayers) and how the idea of the westward journey and its redemptive conclusion in the promised land belied the costs of that journey. Members of the Donner party, she reminded readers, ate their dead in order to survive, just as many other pioneers reinvented themselves in the West at the price of jettisoning their families and their roots. (Didion’s great-great-great-grandmother Nancy Hardin Cornwall was a member of the Donner party, though she left the ill-fated group at Humboldt Sink in Nevada to cut north through Oregon.)

The heroines in many of Didion’s novels share this penchant for haphazardly shucking off one life for another, like actors stepping into new roles. In “Democracy,” Inez Victor, a daughter of a wealthy businessman in Hawaii, marries an ambitious politician, gets involved with a charismatic adventurer and somehow ends up in Kuala Lumpur, working with refugees. In “The Last Thing He Wanted,” Elena McMahon — a wife, mother and wealthy Los Angeles hostess — walks away from her old life and washes up in Costa Rica, caught in the middle of an assassination plot involving U.S. aid to the contras.

Such characters made the Didion heroine a recognizable literary figure. They lose their men to accidents and divorce, their children to abortion, illness and the convulsions of history. They are restless survivors given to bad nerves and worse dreams, who often find themselves adrift in some hot country filled with political intrigue — in flight from themselves or a past they do not want to remember.

In fact, one of the recurrent themes in all Didion’s books, both fiction and nonfiction, is Americans’ penchant for reinventing themselves, their belief in fresh starts and second acts — a faith, on the one hand, that helped settle this country and fueled the American dream, and yet, on the other, has resulted in rootlessness and anomie, the discarding of personal and public history. Narratives, Didion suggests, can provide order, but that order can also be an illusion — or, worse, in the case of political spin masters, a disingenuous connecting of the dots meant to sell false gods and shoddy goods.

Didion’s most powerful work is painfully aware of the narrative arc ultimately traced by everyone’s life and “the ways in which people do and do not deal with the fact that life ends.” If many of her essays and books have an elliptical structure in which scenes from the past are juxtaposed with scenes from the present, it’s a narrative method meant to underscore the Möbius strip of time. In “Blue Nights,” she recalls the vanishing of the world she and her husband knew when they were starting out in New York and Hollywood — a time when there was still a Pan Am and a TWA, a time when “we still called the 405 the San Diego” Freeway, when “we still called the 10 the Santa Monica.”

Her 1967 essay “Goodbye to All That” memorialized the New York City of her youth and what it represented to her, an aspiring writer in her 20s, finding her way in the world, before disillusion and despair ambushed her. “Blue Nights” similarly juxtaposes bright snapshots of the past — Didion and her husband and daughter on vacation in Hawaii, the three of them at the beach in Malibu, Quintana’s wedding day and the bright-red soles of her shoes — with the shock of her death and the permanence of her and John’s departure.

“Time passes” is the refrain that runs through that book. “Time passes. Memory fades, memory adjusts, memory conforms,” she writes, “to what we think we remember.”

Michiko Kakutani is a former chief book critic of The Times and the author of the book “Ex Libris: 100+ Books to Read and Re-Read.” She reviewed several works by Joan Didion over the decades and interviewed Ms. Didion in 1979. Follow her on Twitter: @michikokakutani