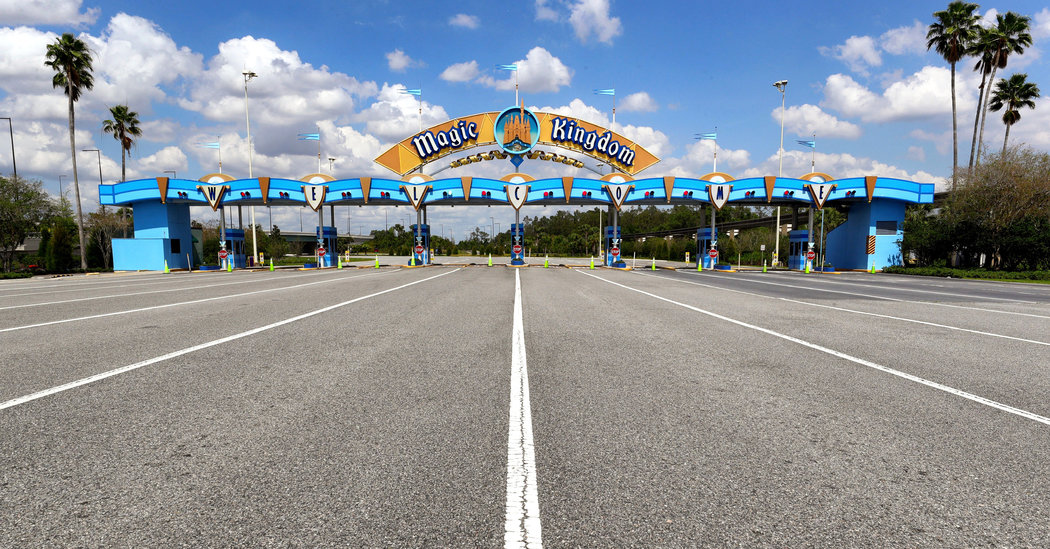 LOS ANGELES — Last year at this time, Disney was celebrating the record-breaking arrival of “Avengers: Endgame” in theaters. On Tuesday, with movie theaters closed worldwide, along with theme parks, Disney said that its quarterly profit fell more than 90 percent.

And that was for a period that was only partly affected by the coronavirus.

“Our businesses have been hugely impacted,” Bob Chapek, Disney’s new chief executive, told analysts on a conference call, noting that theme park employees had been furloughed (an analyst-estimated 100,000 of them) and executives have taken steep pay cuts. “We’re doing everything we can to mitigate the impact of the cash burn.”

Disney said its board had voted to forgo payment of its summer dividend, preserving about $1.6 billion in cash.

Mr. Chapek declined to say when Walt Disney World in Florida or Disneyland in California might reopen. (They closed in mid-March.) What about production on large-scale movies? When might shooting resume? “No projections,” he said.

Because of its size and lack of diversification, Disney has been badly hobbled by the coronavirus pandemic. But the quarter that ended on March 30 was broadly affected for only a couple of weeks. Walt Disney World, for instance, was closed for 17 days of the period; the vast resort could be closed for the entirety of the current quarter.

Disney did say that its newest theme park resort, Shanghai Disneyland, would reopen on May 11 with “controlled capacity,” temperature checks and everyone wearing masks. “Queues will be structured and ride vehicles will be loaded to promote social distancing,” Disney said. Mr. Chapek said that Shanghai Disneyland attracted roughly 80,000 people a day under normal conditions. For the moment, the Chinese government wants capacity capped at 24,000 a day.

“We’re actually going to open far below that,” Mr. Chapek said, “to get our training wheels on.”

Disney’s theme parks have long been watched as a bellwether for the broader economy. It is unclear whether the masses — now reeling from widespread pay cuts and job losses — will be able to afford Disney vacations when the gates do reopen. It took two years for Disney’s parks and cruise ship division to fully recover from the last recession.

The company must also navigate other troubling media trends. TV advertising (Disney owns ESPN, ABC, FX and other channels) is plummeting. Newly cost-conscious consumers are also canceling their cable service in larger numbers. At least 1.6 million people cut the cord between January and April, about 20 percent more than analysts had expected.

Profit in the most recent quarter, the second in Disney’s fiscal year, totaled $475 million, down 91 percent from $5.43 billion in the same period a year earlier. Excluding one-time items, per-share profit fell 63 percent, to 60 cents from $1.61.

Revenue added up to $18 billion, however, an increase of 21 percent that was largely attributable to Disney’s integration of certain 21st Century Fox assets, including FX.

Analysts had been expecting per-share earnings of 88 cents and revenue of $17.8 billion. Since late January, when Shanghai Disneyland closed because of the coronavirus in China, Disney shares have fallen almost 30 percent. Its stock fell about 2 percent in after-hours trading on Tuesday.

Operating income for the last quarter at Disney Parks, Experiences and Products, a division that includes theme parks, cruise vacations and retail stores, totaled about $639 million, a decline of roughly 58 percent. Disney said the pandemic took a $1 billion bite out of the unit’s operating profit.

Losses at Disney’s streaming business, anchored by Disney Plus and Hulu, widened to $812 million from $385 million, largely because of costs associated with rolling out Disney Plus in Europe. Analysts had expected $886 million in losses. Disney said that streaming losses would total roughly $1.1 billion in the current quarter, which will include the introduction of Disney Plus in Japan. Disney Plus now has 55 million subscribers.

The only Disney division to improve its position in the quarter was television, where total income rose 7 percent, to $2.38 billion. Cable profit increased 1 percent and broadcasting profit soared 53 percent, largely because of Fox assets. ESPN, which now has virtually no live events to show, declined, although ratings for a 10-part documentary series on Michael Jordan have been strong.

In recent days, prominent analysts downgraded Disney. Citing “significant and unrivaled earnings risk for the foreseeable future,” Michael Nathanson of MoffettNathanson moved the company to neutral from buy. Richard Greenfield, a founder of LightShed Partners, lowered Disney to sell from neutral, writing in a note to clients that there “is no clarity on when vacation travel normalizes, nor when movie theater attendance normalizes.”

It was Disney’s first earnings report since its longtime chief executive, Robert A. Iger, abruptly transferred power to Mr. Chapek, who took over as chief executive on Feb. 25 and joined Disney’s board on April 15. Mr. Iger, now executive chairman, opened the call with analysts, however. He said that he had been working “in partnership” with Mr. Chapek.

“A challenge of this magnitude,” Mr. Iger said, requires “all hands on deck.”

Mr. Iger and Mr. Chapek both emphasized their expectations for a full recovery over the long term. “What we create has never been more necessary or more important,” Mr. Iger said. “People find comfort and inspiration in our messages of hope and optimism.”