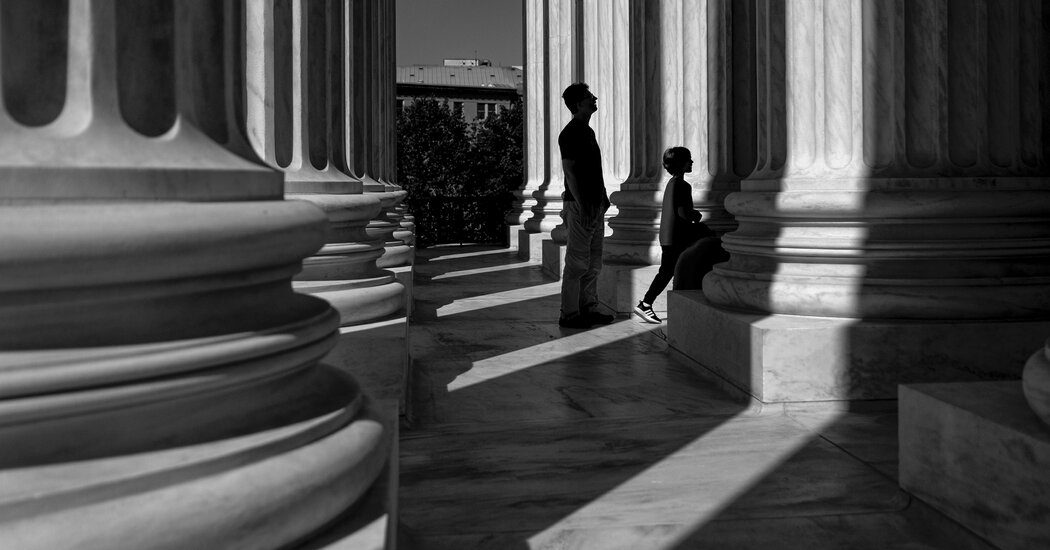 It might have looked like a coincidence that questions of abortion and guns both reached the Supreme Court in the same week. But it wasn’t, really. Powerful social movements have devoted years to steering these two issues toward a moment of truth in a court reshaped in large measure by those same movements.

Recall that in the Rose Garden ceremony in September of last year in which President Donald Trump introduced his third Supreme Court nominee, Amy Coney Barrett, to the country, he couldn’t refrain from observing that “rulings that the Supreme Court will issue in the coming years will decide the survival of our Second Amendment.” The president didn’t mention abortion. Given his nominee’s well-known opposition to Roe v. Wade, he didn’t have to.

So, perhaps inevitably, it has come to this: One right, established for nearly half a century, faces erasure, while the other, extracted 13 years ago from a contorted reading of an 18th-century text, may be poised for an ahistoric expansion.

Little emerged in the arguments this week to knock the rights to abortion and gun possession off these apparent trajectories. Although the consensus seems to be that a majority of the justices may not permit Texas to get away with walling off its appalling anti-abortion law from judicial challenge, the fate of the actual right to abortion itself depends not on the pair of Texas cases the court heard this week, but on the case from Mississippi it will hear on Dec. 1.

And on the Second Amendment case, a challenge to New York State’s limits on licenses for carrying a concealed weapon, there was little surprise that a majority appeared ready to interpret the Constitution to require a substantial expansion of individual gun rights.

Still, something interesting did emerge from the proximity of the week’s arguments. The Texas law, S.B. 8, seeks to take state officials out of the role of enforcing the ban on abortion that the law imposes at roughly six weeks of pregnancy. Instead, any individual may bring a private damages action for at least $10,000 against anyone who provides or enables an abortion in violation of the law. At least while Roe v. Wade and Planned Parenthood v. Casey remain as precedents, the six-week ban is flagrantly unconstitutional. The idea of turning every citizen into a potential vigilante is to immunize state officials from a federal court lawsuit that would challenge the law’s constitutionality, on the theory that no official has anything to do with the law’s enforcement.

Arkansas, Florida and other red states, even the former swing state of Ohio, may well emulate Texas with their own versions of S.B. 8. But what about blue states? A brief filed against Texas by a gun-rights group, the Firearms Policy Coalition, raised the prospect that if the state’s vigilante mechanism prevails, states favoring limitations on gun ownership contrary to Supreme Court precedent could enact their own copycat laws authorizing individuals to sue gun owners. In the federal government’s suit against Texas — one of the two cases the court heard on Monday — the Justice Department’s brief underscored the “startling” implication of the state’s position. “A state could use the same mechanism to effectively nullify any constitutional decision of this court with which it disagreed,” the brief said, adding:

A state might, for example, ban the sale of firearms for home protection, contra District of Columbia v. Heller, or prohibit independent corporate campaign advertising, contra Citizens United v. FEC, and deputize its citizens to seek large bounties for each sale or advertisement. Those statutes, too, would plainly violate the Constitution as interpreted by this court. But under Texas’ theory, they could be enforced without prior judicial review — and, by creating an enforcement scheme sufficiently lopsided and punitive, the state could deter the exercise of the target right altogether.

Clearly, this warning got the justices’ attention. During the argument in the case brought by Texas abortion providers, Justice Brett Kavanaugh posed to Judd Stone, the Texas solicitor general, the prospect that “Second Amendment rights, religion rights, free-speech rights could be targeted by other states” along the same model. “Say everyone who sells an AR-15 is liable for $1 million to any citizen,” Justice Kavanaugh continued. “Would that kind of law be exempt from pre-enforcement review in federal court?”

Mr. Stone answered as the theory of his case demanded. “Whether or not federal court review is available does not depend on the nature of the right,” he said, as he had to do in order not to concede that the purpose of S.B. 8 was to shut down abortion, and abortion alone, in the state of Texas.

Justice Kavanaugh knew this, of course, but he pressed on. “A state passes a law, anyone who declines to provide a good or service for use in a same-sex marriage, a million dollars as sued by anyone in the state — that’s exempt from pre-enforcement review?”

When the Texas solicitor general offered that Congress could pass a law specifying the federal courts’ jurisdiction to hear such a case, Justice Elena Kagan joined the colloquy. “Isn’t the point of a right that you don’t have to ask Congress?” she said. “Isn’t the point of a right that it doesn’t really matter what Congress thinks or what the majority of the American people think as to that right?”

The notion that seemingly disparate rights may rise or fall together is not in fact new. It was posed powerfully in 2014 by a federal district judge in Alabama, Myron Thompson, who struck down the state’s law that required doctors who perform abortions to have admitting privileges in local hospitals. If put into effect, the law would have closed the only abortion clinics in three of Alabama’s biggest cities and would have come close to “imposing an outright prohibition” on abortion in the state, Judge Thompson wrote. Suppose, he continued, that a state decided to impose restrictions on gun dealers so severe that only two dealers were left within the state’s borders:

It’s the role of hypothetical scenarios — Judge Thompson’s, Justice Kavanaugh’s, Justice Kagan’s — to test premises and clarify stakes. Do all rights rise and fall together? Of course not. But neither are they completely disconnected one from the other, nor from the systems that enforce and protect them. At the heart of the Texas response to the Justice Department’s lawsuit was the claim that the federal government had no business coming into court to vindicate a right that the state had chosen to render inaccessible.

The state’s solicitor general did not express that position in so many words, but his meaning came through clearly to Justice Kagan, who interjected, “I mean, if that’s right, you know, and we say that, we would live in a very different world from the world we live in today.”

At least in Texas, that day has already arrived. It’s the Supreme Court’s move now.