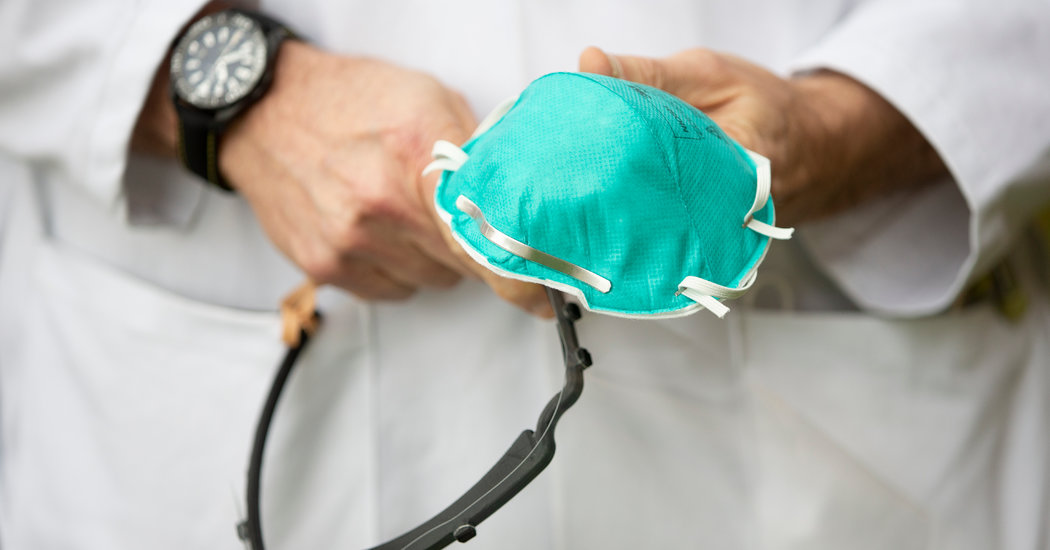 It was a stealth transaction, arranged through “someone who knew someone who knew someone,” taking place at an undisclosed location in an unnamed mid-Atlantic state. The getaway vehicles were disguised as food service delivery trucks, and they mapped out separate routes back to Massachusetts to avoid detection.

Those were the lengths that a hospital system in Springfield, Mass., went to this month to procure urgently needed masks for workers treating a growing number of patients with the coronavirus.

“Some of this might seem over the top,” said Dr. Andrew W. Artenstein, the chief physician executive of Baystate Health, a four-hospital system in Springfield. “But with the entire Northeast in the throes of the early stages of a surge, our concern was that if we’re transporting scarce equipment, there would be some risk it might not make it back.”

As state and federal officials consider how and when to allow public life to start up again, supplies like personal protective equipment for health care workers — seen as essential if coronavirus surges re-emerge — remain in dangerously short supply. An intense and chaotic scramble continues to unfold as hospitals, cities and states go out on their own to compete for masks and gowns, with uneven and shifting coordination by the federal government.

In Maryland, Gov. Larry Hogan, a Republican, called on his wife to get favorable deals to obtain more testing kits, which he views as essential for reopening the state. His wife, Yumi Hogan, a Korean immigrant who speaks fluent Korean, was on the phone in the middle of the night recently, he said, helping to secure the final deal with two South Korean labs.

“I was frosted because my team was saying that the F.D.A. approval was going to hold it up,” Mr. Hogan said of a shipment that arrived Saturday.

In California, Gov. Gavin Newsom, a Democrat, who has expressed frustration about competing with other states, countries and even the federal government, this month announced a nearly $1 billion deal to buy hundreds of millions of masks from China.

He has refused to provide details of the contract even to state lawmakers amid reports of deals getting upended at the last minute, either from countries offering higher prices or from federal agencies stepping in and seizing goods.

In Los Angeles, a group of 18 city workers is sifting through offers of supplies that have flooded city phone lines and email accounts.

“It would have been nice if this was done nationally from the very beginning,” said Mayor Eric M. Garcetti, a Democrat.

In recent weeks, the city lost out on two deals it thought it had secured. In one case, it had reached an agreement to buy one million masks from one of its usual suppliers, and had even cut the check. At the last minute, the Federal Emergency Management Agency stepped in and bought the supplies, Mr. Garcetti said.

In another case, the city thought it had a deal to buy half a million masks that were sitting in a warehouse in Los Angeles. The next day, officials were told that a Russian entity had outbid them, and the supplies were suddenly on a flight out of the country.

Supplies of N95 respirator masks have increased in recent weeks, but many hospitals and health care workers say they are still working without adequate gear.

“The supply chain is still unpredictable and unreliable in every way possible,” Dr. Ranney said. “The need for an organized, equitable distribution system is dire.”

At Brookdale University Hospital and Medical Center in Brooklyn, private donations of respirator masks have helped offset the shortages, but doctors and nurses are still recycling single-use masks and gowns for up to a week.

The New York State Nurses Association on Monday filed a lawsuit against the New York State Department of Health and two hospital systems, asserting that a lack of protective gear was endangering the lives of front-line medical workers. Many intensive care unit nurses, the association said, have been forced to reuse N95 masks for up to five days.

“You can’t send an army into battle without armor,” said Pat Kane, the association’s executive director.

Supply chain experts and health care providers have called on the federal government to provide stronger oversight for what they describe as a chaotic battle that pits governors, hospital chains and governments against one another. Volunteer efforts like Project N95 have tried to vet equipment manufactured in China, but counterfeit and defective gear continues to flood the market and price gouging remains pervasive.

“Everyone seems to know a dude whose roommate in college has set up a factory in China, but you just don’t know who to trust,” said Thomas Tighe, the president of Direct Relief, a nonprofit organization that supplies protective gear to health care clinics in low-income neighborhoods. “It’s just too easy to fake these things.”

As hospital administrators and governors have pleaded for more protective gear, the federal government’s national stockpile has dwindled.

The Trump administration initiated a program, called Project Airbridge, that airlifts protective gear to the United States from overseas. Federal authorities have praised the program, saying it serves as a way to swiftly bring gear to communities that need it the most. Overseen by Jared Kushner, the president’s son-in-law and senior adviser, the administration flies equipment procured by the private sector in a matter of days. It redirects roughly half of each shipment to be sold to locations in the United States deemed to be in most urgent need, while the rest is sold to companies, hospitals and local governments that had already placed orders.

But intervention by the federal government has also prompted complaints that FEMA is using opaque and inconsistent criteria to effectively redirect equipment to localities of its choosing.

Dr. Howard Mell, a spokesman for the American College of Emergency Physicians, said medical workers were confused and angered by the reported seizures. “Where is this personal protective equipment going and how do we get it to the right people?” he asked. “We absolutely should be able to access this equipment if it’s being seized in the public’s name.”

Part of the problem is that while large, established medical supply manufacturers and distributors have ramped up production, they have more orders than they can handle — forcing government officials to turn to newcomers to the business. Some are legitimate, others are not.

Jesse Greenberg, a spokesman for Medline, the largest privately held medical distributor and manufacturer in the United States and the prime vendor for 40 percent of the nation’s hospitals, said it had seen demand surge by 300 percent. Everyone from hospitals to governors were clamoring to buy equipment, he said, some even offering premiums in an effort to outbid competitors.

Early on, he said, the company made a decision: It would not take on any new customers, and would instead focus on meeting the needs of its existing customers. No hospital can outbid another, he said; as additional coronavirus-related supplies become available, they are doled out according to an allocation formula based on pre-pandemic ordering history.

“We didn’t want to be picking and choosing who we were going to supply and who was going to be shortchanged,” Mr. Greenberg said.

At Hillrom, a $2.9 billion company that sells everything from I.C.U. beds to ventilators and vital signs equipment, company officials took a different tack. A top-level committee of executives was formed to determine where its equipment was needed most — and priority was given to meeting orders from hot spots in the United States, Europe and elsewhere.

Medical officials like Dr. Artenstein, who wrote of his travails in The New England Journal of Medicine, say there is little choice but to resort to cloak-and-dagger techniques.

The situation in Massachusetts has worsened quickly. The state’s death toll more than doubled in the seven-day period ending Sunday, eclipsing 1,700, and cases rose by more than 12,000, to 38,077, in that same period.

“When I saw the pallets of supplies, and we tested the masks, I was pretty happy that this could work out,” said Dr. Artenstein, who drove several hours to execute the deal. He said he would not disclose the name of his vendor or its location because he did not want to jeopardize his ability to work with the vendor again.

Just when he thought he had wrapped up his deal, Dr. Artenstein said, the F.B.I. appeared, checking the shipment of one million masks and seeking to verify Dr. Artenstein’s credentials.

In retrospect, he said, he was glad that F.B.I. agents were there, apparently to ensure that the masks were not going to the black market. But then other federal agencies soon got involved, leading to more than 10 hours of delays, he said. The process ended only after the intervention of the Springfield area congressman, Representative Richard E. Neal, a Democrat and chairman of the House Ways and Means Committee.

An official from FEMA said that there have been cases where the federal government has redirected supplies away from communities — even those with growing outbreaks — because it must weigh other variables, including how much equipment a state already has in storage.

Dr. Artenstein said he came away believing that the nation was in desperate need of a central clearing house for these supplies.

He was forced to go his own way, he said, because what exists now is a zero-sum game, “and the cavalry does not appear to be coming.”