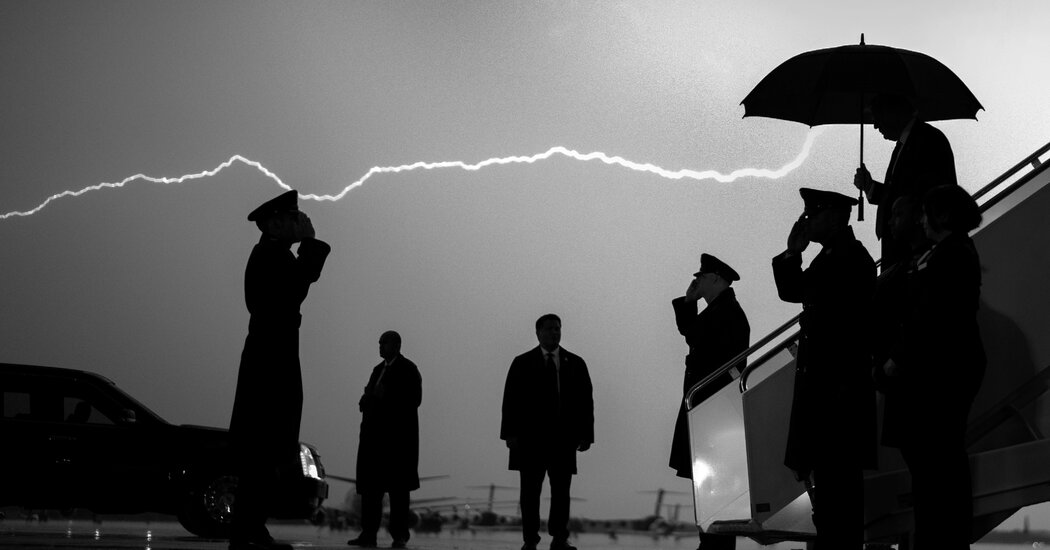 Like most Democrats, I initially underestimated Donald Trump. In 2015, I founded a super PAC dedicated to electing Hillary Clinton. Through all the ups and downs of the campaign, I didn’t once imagine that Americans would vote Mr. Trump in.

He was an obvious pig (see the “Access Hollywood” tape), a fraud (multiple failed businesses and bankruptcies) and a cheat (stiffing mom-and-pop vendors). Not to mention the blatant racism and misogyny. About the outcome, I was spectacularly wrong.

Once he was in office, I misread Mr. Trump again. Having worked inside the conservative movement for many years, I found his policies familiar: same judges, same tax policy, same deregulation of big business, same pandering to the religious right, same denial of science. Of course, there were the loopy tweets, but still I regarded Mr. Trump as only a difference of degree from what I had seen from prior Republican presidents and candidates, not a difference of kind.

When a raft of books and articles appeared warning that the United States was headed toward autocracy, I dismissed them as hyperbolic. I just didn’t see it. Under Mr. Trump, the sky didn’t fall.

My view of him began to shift soon after the November election, when he falsely claimed the election was rigged and refused to concede. In doing so, Mr. Trump showed himself willing to undermine confidence in the democratic process, and in time he managed to convince nearly three-quarters of his supporters that the loser was actually the winner.

Then came the Capitol Hill insurrection, and, later, proof that Mr. Trump incited it, even hiring a lawyer, John Eastman, who wrote a detailed memo that can only be described as a road map for a coup. A recent Senate investigation documented frantic efforts by Mr. Trump to bully government officials to overturn the election. And yet I worry that many Americans are still blind, as I once was, to the authoritarian impulses that now grip Mr. Trump’s party. Democrats need to step up to thwart them.

Are Democrats up for such a tough (and expensive) fight? Many liberal voters have taken a step back from politics, convinced that Mr. Trump is no longer a threat. According to research conducted for our super PAC, almost half of women in battleground states are now paying less attention to the political news.

But in reality, the last election settled very little. Mr. Trump not only appears to be preparing for a presidential campaign in 2024; he is whipping up his supporters before the 2022 midterms. And if Democrats ignore the threat he and his allies pose to democracy, their candidates will suffer next fall, imperiling any chance of meaningful reform in Congress.

Going forward, we can expect bogus claims of voter fraud, and equally bogus challenges to legitimate vote counts, to become a permanent feature of Republican political strategy. Every election Republicans lose will be contested with lies, every Democratic win delegitimized. This is poison in a democracy.

As of late September, 19 states had enacted 33 laws that will make it harder for their citizens to vote. The Republican National Committee’s “election integrity director” says the party will file lawsuits earlier and more aggressively than it did in 2020. Trump wannabe candidates like Glenn Youngkin, running for Virginia governor, are currying favor with the Republican base by promoting conspiracy theories suggesting that Virginia’s election may be rigged.

More alarmingly, Republicans in swing states are purging election officials, allowing pro-Trump partisans to sabotage vote counts. In January, an Arizona lawmaker introduced a bill that would permit Republican legislators to overrule the certification of elections that don’t go their way. In Georgia, the legislature has given partisan election boards the power to “slow down or block” election certifications. Why bother with elections?

Democrats now face an opposition that is not a normal political party, but rather a party that is willing to sacrifice democratic institutions and norms to take power.

The legislation Democrats introduced in Congress to protect our democracy against such assaults would have taken an important step toward meeting these challenges. But on Wednesday, Republicans blocked the latest version of the legislation, and given the lack of unanimity among Democrats on the filibuster, Republicans may well have succeeded in killing the last hope for any federal voting rights legislation during this session of Congress.

Having underestimated Mr. Trump in the first place, Democrats shouldn’t underestimate what it will take to counter his malign influence now. They need a bigger, bolder campaign blueprint to save democracy, one that doesn’t hinge on the whims of Congress.

We should hear more directly from the White House bully pulpit about these dire threats. The Jan. 6 investigators should mount a full-court press to get the truth out. Funding voting rights litigation should be a top priority.

Where possible, Democrats should sponsor plebiscites to overturn anti-democratic laws passed by Republicans in states. They should underwrite super PACs to protect incumbent election officials being challenged by Trump loyalists, even if it means supporting reasonable Republicans. Donations should flow into key governor and secretary of state races, positions critical to election certification.

In localities, Democrats should organize poll watching. Lawyers who make phony voting claims in court should face disciplinary action in state bar associations. The financiers of the voting rights assault must be exposed and publicly shamed.

The good news is that liberals do not have to copy what the right is doing with its media apparatus — the font of falsehoods about voter fraud and a stolen election — to win over voters. Democrats can leapfrog the right with significant investments in streaming video, podcasting, newsletters and innovative content producers on growing platforms like TikTok, whose audiences dwarf those of cable news networks like Fox News.

Issues like racial justice, the environment and immigration are already resonating online with audiences Democrats need to win over, such as young people, women and people of color. Democratic donors have long overlooked efforts to fund the media, but with so much of our politics playing out on that battlefield, they can no longer afford to.

David Brock (@davidbrockdc) is the founder of Media Matters for America and American Bridge 21st Century, a Democratic super PAC.