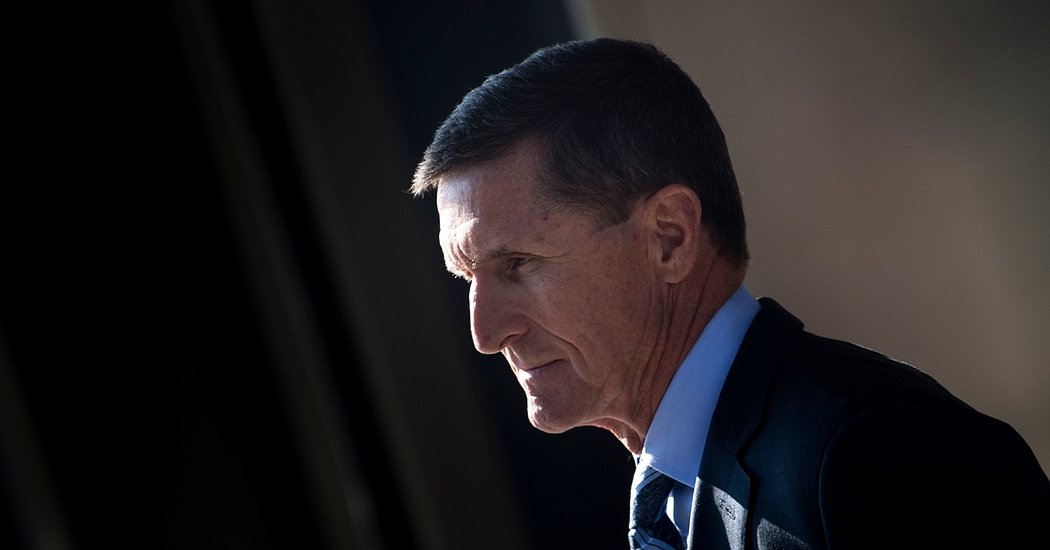 It can be hard to recall, since so many members of President Trump’s inner circle have been indicted, convicted of federal crimes and even sent to prison, but the first felon to emerge from this administration was Michael Flynn.

Mr. Flynn, who served less than a month as the national security adviser before resigning in disgrace, pleaded guilty in December 2017 to lying to F.B.I. investigators about his communications with the Russian ambassador.

When asked about the plea at the time, Mr. Trump said, “I had to fire General Flynn because he lied to the vice president and the F.B.I.”

That was true, of course. Mr. Flynn did lie, as he admitted to under oath in a court of law — twice. He told investigators, falsely, that he had not communicated with Sergey Kislyak, the Russian ambassador to the United States, about possible changes to American foreign policy toward Russia even before Mr. Trump took office.

Last year Mr. Flynn asked the federal judge to throw out his conviction because, he claimed, the prosecutors and F.B.I. agents on his case had engaged in misconduct. The judge rejected his request, finding that the agents had not entrapped Mr. Flynn. And a report by the Justice Department’s inspector general found that the bureau had sufficient evidence to investigate Mr. Flynn as part of its inquiry into the Trump campaign’s ties to Russia, even as the report was sharply critical of the F.B.I.’s broader handling of that investigation.

Yet on Thursday, the Justice Department, under Attorney General William Barr, suddenly dropped all criminal charges against Mr. Flynn.

In a court filing, Mr. Barr said that the interview in which Mr. Flynn admitted to lying to authorities was “conducted without any legitimate investigative basis,” and so his statements were not “material” to an active investigation. Further, the department said it was unable to prove that Mr. Flynn had in fact made false statements.

To review: Mr. Barr is now saying he cannot prove charges to which Mr. Flynn has twice pleaded guilty in court — and for which there is ample evidence.

As for legitimacy and materiality, the F.B.I. was in the middle of a monthslong counterintelligence investigation into possible ties between the Trump campaign and the Russian government. Mr. Flynn was a top aide to that campaign, and he lied about speaking with the Russian ambassador in a way that undermined the Obama administration, which was still in charge at the time.

He had the constitutional right to remain silent, but he chose not to, and then he lied. Defense lawyers across the country will surely leap at the chance to seek similar concessions on behalf of their clients, and we are eager to see Mr. Barr apply this standard in thousands of other cases where the defendant is not a friend of the president’s.

Mr. Trump, his original explanation for firing Mr. Flynn notwithstanding, promptly crowed that his former aide was an “innocent man” who had been targeted by the Obama administration. He said Thursday in an Oval Office appearance that the officials involved in the Russia investigation and the Flynn case were guilty of “treason” and would “pay a big price.”

It’s hard to overstate how dangerous this is. It is a small step from using the Justice Department to protect your friends to using it to go after your political enemies. In other words, watch out, Joe Biden.

It is, of course, entirely in character for Mr. Trump, who lavishes praise on autocrats and dictators around the world. He is now emulating them, using the Justice Department to protect his friends, in the belief that he can do so with impunity. As long as Mr. Barr leads the Justice Department, he can.

The attorney general is supposed to work for the American people, not as a personal fixer for the president. Instead, from the day he took the job, Mr. Barr has worked to provide cover for Mr. Trump. He provided a misleading account of the Mueller investigation’s findings; he overrode his own attorneys’ sentencing recommendations for another of Mr. Trump’s criminal cronies, Roger Stone; he assigned new investigators to sniff out misconduct by the Mueller investigation; and he weighs in publicly on the purported wrongdoing of those involved in that investigation, none of whom have been charged with any crimes.

Career prosecutors who have dedicated their lives to the rule of law and the independent administration of justice are left to wonder what they’re supposed to do now. (Shortly before the Justice Department’s filing, Brandon Van Grack, the prosecutor who led the case against Mr. Flynn, announced his withdrawal from the case.)

Michael Bromwich, a former Justice Department inspector general, called Thursday “A black day in D.O.J. history.” He’s right. Our institutions have withstood corruption and malfeasance at the highest level, until now. With William Barr at the right hand of Donald Trump, that is no longer assured.