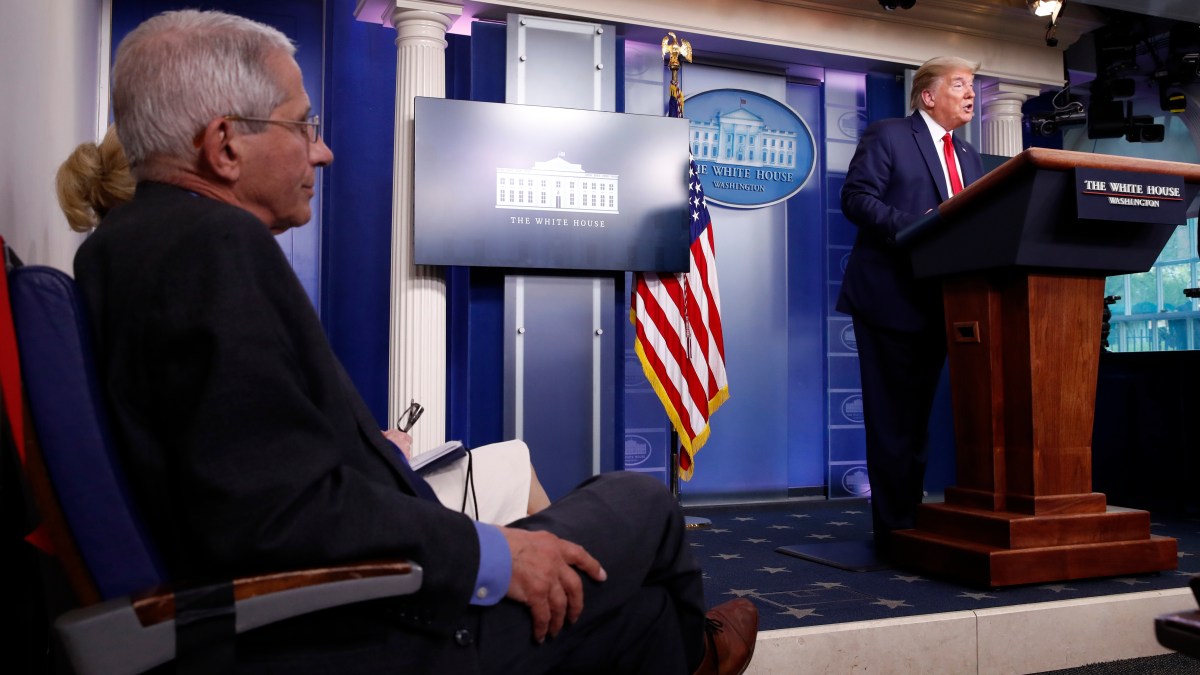 Dr. Anthony Fauci, the government’s top infectious disease expert, said Tuesday the U.S. does not yet have the critical testing and tracing procedures needed to begin reopening the nation’s economy, adding a dose of caution to increasingly optimistic projections from the White House.

“We have to have something in place that is efficient and that we can rely on, and we’re not there yet,” Fauci said in an interview with The Associated Press where he also lamented the amount of time daily White House coronavirus press conferences takes on his schedule.

Fauci’s comments come as President Donald Trump and others in the administration weigh how quickly businesses can reopen and Americans can get back to work weeks after the fast-spreading coronavirus essentially halted the U.S. economy. Trump has floated the possibility of reopening some areas by May 1 and said he could announce recommendations as soon as this week.

Fauci said a May 1 target is “a bit overly optimistic” for many areas of the country. Any easing off the strict social-distancing rules in place in much of the country would have to occur on a “rolling” basis, not all at once, he said, reflecting the ways COVID-19 struck different parts of the country at different times.

Among Fauci’s top concerns: that there will be new outbreaks in locations where social distancing has eased, but public health officials don’t yet have the capabilities to rapidly test for the virus, isolate any new cases and track down everyone that an infected person came into contact with.

“I’ll guarantee you, once you start pulling back there will be infections. It’s how you deal with the infections that’s going count,” Fauci told the AP.

Key is “getting people out of circulation if they get infected, because once you start getting clusters, then you’re really in trouble,” he added.

At the same time Fauci is directing critical government research, he’s also one of the administration’s leading spokespeople on the virus, spending hours each week by Trump’s side during his lengthy, daily White House briefings.

Dr. Anthony Fauci said relaxing social isolation guidelines would likely not be “one size fits all” as different counties experience varying intensities of the outbreak. “I think you’re going to have to take it individually,” he said.

Fauci said his public role is important but conceded that the duration of those briefings — Monday’s ran for nearly two-and-a-half hours — was “really draining” and that doesn’t even count preparation and waiting for it to start.

“If I had been able to just make a few comments and then go to work, that would have really been much better,” he said. “It isn’t the idea of being there and answering questions, which I really think is important for the American public. It’s the amount of time.”

Much of Fauci’s time outside of the White House briefing room is focused on analyzing progress on blood tests that aim to tell who was exposed to the coronavirus — whether they knew they were sick or not — by spotting antibodies their immune system formed to fight back. Those tests will be crucial in determining when and how people can go back to work.

The problem: Most of the tests have not yet been proven to work well, Fauci cautioned. He noted that some countries bought millions of antibody tests only to learn they didn’t work.

Fauci, infectious disease chief at the National Institutes of Health, said his staff is working with the Food and Drug Administration to validate those tests. That means proving what level of antibodies it takes to really be immune; if particular types of antibodies are key rather than an overall level; and how long that protection lasts.

“We’re going to have to find out the answer to all of those questions,” Fauci stressed. “I know people are anxious to say, ‘Well, we’ll give you a passport that says you’re antibody-positive, you can go to work and you’re protected.’ The worst possibility that would happen is if we’re actually wrong about that” and those people get infected.

Another complication is that scientists still don’t have a solid understanding of how often people who show either no obvious symptoms or very few symptoms are spreading the virus. It’s “purely a guesstimate” but no less than 25% and no more than half of overall cases may be from the relatively asymptomatic, he said.

Looking ahead, Fauci said a second wave of infection isn’t inevitable. But he added: “if you mean it goes way down and then come September, October, November, we have another peak, I have to say I would not be surprised. I would hope that if and when that occurs, that we jump all over it in a much, much more effective way than we have in these past few months.”