On Tuesday, as Illinois voters went to the polls amid growing concerns about the coronavirus, Chicago Alderman Nicholas Sposato was determined to deliver several dozen pizzas in his Northwest Side ward.

Gov. J.B. Pritzker had already ordered schools and bars shut down and limited restaurants to takeout and delivery service. But polling places were open and so was Sposato’s 38th Ward office. As he saw it, his job was to keep delivering constituent services — which in this case also meant delivering “the pies.” Sposato had a tradition of using campaign funds to buy pizza for election volunteers around his ward, and he was intent on continuing it. So, as Chicago election officials traded blame with Pritzker over struggles to staff and sanitize polling places, Sposato embarked on his usual rounds.

Even within heavily Democratic Illinois, the political responses to COVID-19 have ranged widely and evolved rapidly. Many officials shrugged off early warnings and some questioned Pritzker’s shutdown orders. But in the last few days, most state and city officials have announced that their offices will be closed and services reduced for at least the next few weeks. 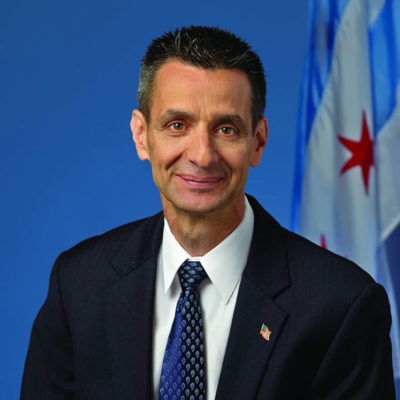 Chicago Alderman Nicholas Sposato of the 38th Ward (Via Facebook)

Sposato was not one of them. As a firefighter turned alderman, Sposato saw his job as front-line public service: Even if he was no longer a first responder, he said he needed to be available to help people. Sposato said he and at least one aide would continue to staff the office the rest of the week. “We’ll play it by ear after that,” he said. “I can’t really justify not being here to answer the phone.”

The 38th Ward sits on a stretch of the Northwest Side known for bungalows and ethnic businesses; Sposato’s office is on the same block as a Polish vitamin store and an Italian cafe. The ward is also home to scores of city employees, including Sposato himself, who had worked for the fire department for 18 years before being elected to the City Council in 2011, toppling a candidate backed by one of Chicago’s last powerful ward organizations.

Monday morning, Sposato said, his office was slammed with visitors and calls. Some had questions about preparing for the coronavirus outbreak or wanted to know how they might help. But most of their concerns were more commonplace: One woman called about an unfamiliar car that had been parked on her street for several weeks. Other residents wondered where they could vote.

Most of the constituents who came in, his aides told me, were seniors who shouldn’t have been out.

Sposato, 61, could be at higher risk from the coronavirus himself; he has multiple sclerosis and uses a wheelchair.

During his first term, Sposato was a member of the council’s Progressive Caucus. Since 2016, though, Sposato has been open about voting for Donald Trump while opposing city initiatives on police accountability and protections for undocumented immigrants. Last month, he blasted the Chicago Board of Education for voting to have schools celebrate Indigenous Peoples Day instead of Columbus Day. He received scathing criticism in return.

In the 38th Ward, though, “I hear more, ‘Thanks for standing up for what we think is right,’” he said as he pulled up to Mama Luna’s pizzeria on West Addison Street. “This is more of a conservative, middle-of-the-road” area, he said, not the sort of place that supports liberal policies that he considers “socialism.” He noted that he won reelection last year without an opponent.

Sposato said his critics fixate on his support for Trump. City Council elections in Chicago are officially nonpartisan, but Sposato considers himself a Democrat, stressing that he also backed President Barack Obama and won’t openly second-guess Pritzker or Mayor Lori Lightfoot either: “I’m a praise-in-public, scold-in-private kid of guy.”

Sposato’s aide Dan Martin — a recent college graduate who said he’s the son of a firefighter — put a stack of boxed pizzas in the back of Sposato’s car, the first batch of 41 pies they had ordered. As the alderman drove toward a polling place, he talked about ways he could help local businesses struggling with the new restrictions, starting with pizza joints.

“I’m kicking around some ideas to try to help some of my restaurants — some kind of stimulus,” he said. His idea: to have volunteers deliver food without taking tips, which would be a great deal for customers. “It’s not going to change your life by saving you 10 bucks for a pizza, but hopefully you order some more stuff.”

He said he and his staff were also trying to prepare for a possible surge in calls from constituents confined to their homes because of COVID-19.

“One thing I can help people with is toilet paper,” he said, because his office had used leftover budget funds to stock up on a number of supplies. “In December, no pun intended, we bought a shitload of toilet paper.” 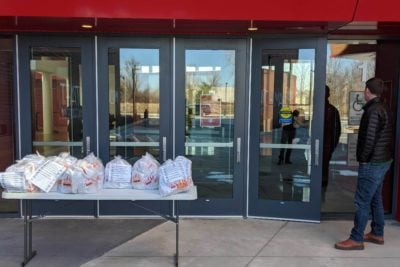 On the morning of Election Day, Dan Martin, an aide to Sposato, checked in with staff at Taft High School Freshman Academy, which is distributing bags of food to student families while classes are canceled. (Mick Dumke/ProPublica Illinois)

At some polling places on their rounds, Sposato and Martin heard stories of light turnout, broken machines and a shortage of sanitizing supplies. At other sites, the balloting had gone smoothly. Sposato mostly stayed in the car as Martin took the pizzas inside.

But the potential risks of Sposato’s Election Day outing became clear a little while later. He stopped outside a school that was being used both as a polling place and a pickup site for packages of take-home food for students who are usually fed breakfast and lunch there.

As Martin took pizzas to election volunteers inside, an acquaintance of Sposato’s walked up to his window. Her face was drawn.

By early afternoon, as the pile of pizza boxes in the back seat dwindled, Sposato said, “I think I’m going to save one of those pizzas for us.” He and his staff were going to need some sustenance too.