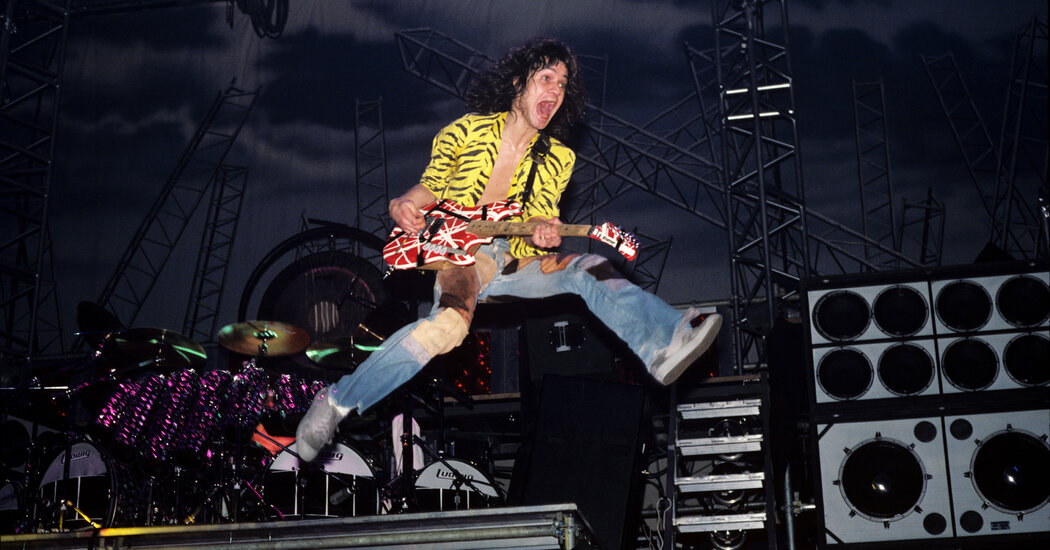 In 1985, Edward L. Van Halen submitted a patent application for a mounted device that would lock a stringed instrument in a horizontal position, allowing guitarists to “create new techniques and sounds previously unknown to any player.” Even holding a guitar in the familiar old vertical position, Eddie created a stunning array of sounds with a utility belt of fleet-fingered techniques that included two-handed tapping on the guitar neck, whammy bar sound effects that sounded like laughter or a spiraling airplane and harmonics thickened with distortion.

Van Halen’s solos stunned, inspired and frustrated fellow guitarists who tried to perform them, but rock is full of dazzling technicians who seem to play with three hands and whose music never catches on beyond Guitar Center employees. Van Halen, who died on Tuesday at 65, also wrote great, immediately gratifying riffs that identified his band’s songs within the first two bars. He called himself “a very rhythmic player,” which he attributed to the many hours he’d spent jamming with his brother Alex, a drummer, as a duo.

And even calling him a great rock guitarist sells Van Halen short; he was also a great songwriter, producer and keyboard player. He sought out new challenges, though the band’s lineup changes and his health problems slowed him down. The band’s last tour, in 2015, featured Van Halen’s son, Wolfgang, on bass, and finished with two nights at the Hollywood Bowl in Los Angeles, about 11 miles from Pasadena, where the band got its start playing pool parties and strip clubs. Here are 12 of Eddie’s greatest songs.

Try to imagine the chorus of the singer David Lee Roth’s sympathetic plaint about a girl who regrets wasting a one-night stand on a bum (“Oh-oh-oh, Jamie’s crying”) without immediately hearing Van Halen’s complimentary reply: two perfectly-chosen notes that work like the tag on a good punchline. Fans who found the band kind of funky were vindicated when the music was sampled for Tone Loc’s 1989 rap smash “Wild Thing.”

Nicolette Larson is best known for her first single, a soft-pop cover of Neil Young’s “Lotta Love” that adds a Spinners-style drum sound. She recorded with a sterling selection of Los Angeles session players including members of Little Feat and the Doobie Brothers, but one song, “Can’t Get Away From You,” featured some uncharacteristic, rocking honky tonk, with a sharp guitar solo credited to “?,” who Larson later revealed to be Van Halen. His solo anticipates some of his future work on “Finish What Ya Started” and Michael Jackson’s “Beat It,” but Van Halen didn’t want to confuse fans by having his name on Larson’s album.

The second Van Halen album is the embodiment of don’t-fix-what-ain’t-broke, and it ends with this brazen come-on to the band’s favorite type of fan: the ones that get backstage. Roth’s lyrical patter about “a snappy little mammy” has overtones of Aerosmith’s “Walk This Way,” and Van Halen’s riffs, which owe a little debt to Billy Gibbons of ZZ Top, swagger like he owns the world — which he kind of did.

An unaccompanied guitar lick starts the song, and it’s as thick and heavy as a Fort Knox vault. This anthemic, major-key rocker is one of Roth’s most playful songs about the life of a Sunset Strip bounder (“blue-eyed murder in a size-five dress,” he howls), and Van Halen uncorks a solo that starts with divebombing single notes, then romps contrapuntally across the song’s pulse.

Eddie had to keep proving his supremacy over legions of imitators, and he opens the band’s fourth album with a tangled flourish of neck tapping that speeds by like the tape is stuck on fast forward. “I tapped on the 12th fret of the low E and on the 12th fret of the high E and muffled both with my left hand down by the nut,” he said in a Guitar World interview, and even if you know what he’s talking about, you probably can’t reproduce it.

Van Halen stands in the back at first, as the track opens with a galloping bass-and-drums groove. Even when he joins, he’s supporting the beat, with only a little trickery in his syncopation. Roth sings about being smitten, and Eddie adds two sensible solos, played in phrases, that simulate the sound of laughter.

After an acoustic intro played on a nylon string guitar and inspired by flamenco great Carlos Montoya, Van Halen resumes regular programming: Roth woos a señorita who’s just not that into him, and Eddie picks out staggered chords that scoot over and between the chorus’ downbeats.

When the producer Quincy Jones called Van Halen and asked him to play on a new Michael Jackson album, he didn’t think he was the right guitarist for an R&B track. “Beat It” is a song about being tough, and given free rein, Van Halen played a virtuosic, expansive solo, during which speakers in the studio control room caught fire. Eddie played on the song for free, and wasn’t billed in the album’s credits. As he told CNN in a 2012 interview, one day when he was shopping at Tower Records, “Beat It” came on and he heard a kid snorting, “Listen to this guy trying to sound like Eddie Van Halen.” (“That is me!” Van Halen told them.)

Van Halen was never a zeitgeist band; it didn’t sound like anyone else or fit into any radio format when it started. That changed in 1984, when its album of the same name became part of one of pop music’s greatest calendar years. Eddie had first played the song’s synthesizer riff for the band in 1981, but they shot it down. The band’s longtime producer Ted Templeman later suggested they revive it, and the band was more open to it the second time. Van Halen played the distinctive synthesizer hook, which proved startling and sometimes obnoxious to longtime fans who loved hard rock, and halfway through, bursts in with a shredding guitar solo, to prove he still can.

Roth left Van Halen for a solo career, and the band replaced him with Sammy Hagar, who lacked Roth’s wit and self-mockery. “Finish What Ya Started” is a highlight of the “Van Hagar” era, thanks to Sammy’s uncharacteristically subtle singing style and Van Halen’s slippery, twangy finger picking, which is closer to Vince Gill than to Ritchie Blackmore — a hybrid you could call Van Haggard. In the video, Eddie even wore a cowboy hat and cowboy boots.

Four Van Hagar albums yielded more than a little keyboard-heavy dreck that seemed to be auditioning for a Tony Scott or Taylor Hackford soundtrack, including “Dreams,” “When It’s Love” and “Love Walks In,” which could pass for a second-rate Journey song and is about contact with aliens. But on the right occasion, Eddie would break out the guitar like an old gunfighter showing young outlaws how fast he can draw. “Poundcake” makes you wonder how he got his guitar to sound like an electric drill, until you look at the credits and see he played an actual drill. The fact that people believed he’d somehow made a guitar sound like an electric drill is testament to his unpredictable and experimental talent.

Let’s fast forward: Hagar left Van Halen in 1996, the band made a dismal album with the singer Gary Cherone of the band Extreme, then Hagar returned briefly in 2004 before leaving again, and Roth rejoined in 2007 to tour and record the group’s only studio album of the last 22 years. Eddie was slowed by a period of drug and alcohol abuse, a divorce from the actress Valerie Bertinelli, hip replacement surgery in 1999 and surgery for tongue cancer the next year. But he rose up to help produce and play on LL Cool J’s “The Greatest,” adding some careening (if undermixed) guitar. Van Halen and LL both sound chuffed to still be doin’ it, and doin’ it well. “I got Van Halen, I don’t need a bass line,” the rapper crows.