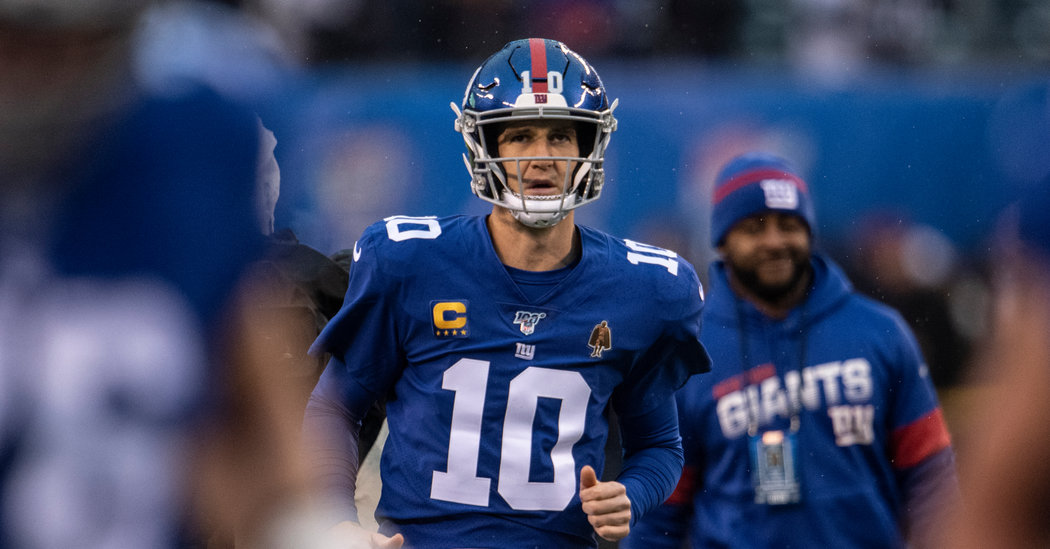 Eli Manning, the Louisiana-born, Mississippi-educated quarterback who became a New York sports folk hero after he led the Giants to two upset victories in the Super Bowl, is retiring from the N.F.L., the team said. Manning will make a formal announcement in a news conference scheduled for Friday.

Manning, 39, played 16 seasons for the Giants and leaves with franchise records for most passing yards (57,023), touchdown passes (366) and completed passes (4,895). He was named the most valuable player of the Super Bowl following the 2007 and 2011 seasons and is one of only five players to have won the award multiple times.

“He represented our franchise as a consummate professional with dignity and accountability,” John Mara, a team co-owner, said in a statement. “It meant something to Eli to be the Giants quarterback, and it meant even more to us.”

A brother of Peyton Manning, who was one of the most productive and celebrated quarterbacks in pro football history, Eli Manning was the quiet, younger sibling who instead became known for sterling performances in the biggest games of his career. Durable and unflappable, he also had an unassuming, workmanlike demeanor that played well during a lengthy career in the country’s largest media market.

But like his brother, who retired in March 2016 and is a certain inductee into the Pro Football Hall of Fame, Eli Manning compiled statistics that will make him a serious candidate for the same honor. His streak of 210 consecutive starts is third most by a quarterback, and he finished seventh in career N.F.L. passing yards and seventh in touchdown passes. Manning also engineered 27 fourth-quarter comebacks for the Giants, the 13th most for a quarterback in N.F.L. history.

“Eli’s legacy will always be championships and leadership,” Ernie Accorsi, the Giants’ general manager who spearheaded the 2004 draft day trade that brought Manning to the Giants, said. “People always ask me what I saw in Eli when he was young. I didn’t see stats. I saw a leader. I saw championships. That’s what he was brought here for, not stats.”

Indeed, the numerical measure of Manning can be less than impressive for a player who made the Pro Bowl four times. His career record as a regular-season starter at quarterback is 117-117.

But to all those who follow football — and even those who do not — Manning will forever be best known for producing two of his best games against the kingly New England Patriots in the Super Bowl, the game’s biggest stage. In the first of those contests, the undefeated Patriots were trying to win their 19th consecutive game that season. They led the Giants by 4 points with less than three minutes remaining. With poise and resourcefulness, Manning led the Giants on an 83-yard drive, which included a pivotal but helter-skelter play: He avoided multiple sack attempts and heaved a pass downfield that wide receiver David Tyree caught by pinning the football against his helmet.

With 35 seconds left, Manning threw a 13-yard touchdown pass for the game-winning points in the Giants’ stunning 17-14 victory, one of the most notable contests in pro football history.

Four years later, the favored Patriots again led the Giants in the final minutes of a Super Bowl. This time, Manning rallied his team with a precise 88-yard drive that began with a 38-yard catch by Mario Manningham. Manning’s pass was deftly threaded at the edge of the left sideline and between two New England defenders and into the arms of Manningham. Three more Manning completions helped put the Giants at the Patriots’ 1-yard line. From there, Ahmad Bradshaw’s touchdown run with 57 seconds remaining gave the Giants a 21-17 win.

The Super Bowl victories were made more memorable because the Giants in each case entered the postseason after a less than sterling regular season. In 2007, the team was 10-6 and had to win three successive away games, at Tampa Bay, Dallas and Green Bay, before facing the Patriots. In 2011, the Giants barely made the playoffs with a 9-7 record and won one home postseason game before earning surprising victories at Green Bay and at San Francisco.

In those playoff runs, Manning consistently outperformed his counterparts at quarterback, including some of the biggest stars in the N.F.L.

“In the most pressure-filled, intensely competitive situations, that’s when you knew you could count on Eli — and boy, he would never let you down,” Tom Coughlin, who was the Giants’ coach during both Super Bowl-championship seasons, said in 2014. “That will forever be his calling card.”

Manning may never have been a Giant if he had not been born in New Orleans to football royalty. His father, Archie Manning, had been an all-American quarterback at the University of Mississippi, but endured a daunting, frustrating N.F.L. career playing for the lowly New Orleans Saints. It was that experience that led to Eli’s decision before the 2004 draft to make it known that he did not want to play for the downtrodden San Diego Chargers, who held the first pick of the draft.

Accorsi had scouted Manning at Mississippi, where Eli had followed in his father’s footsteps, and hoped that he could induce the Chargers to select Manning but then trade him to the Giants. The deal was consummated when the Giants chose quarterback Philip Rivers and sent him to San Diego for Manning, along with the Giants’ third-round pick that year and the team’s first- and fifth-round selections in 2005.

Manning was installed as the team’s starting quarterback by November 2004. By the next season, the Giants won 11 games and made the playoffs, where they were routed in the first round. A string of poor performances ensued for the team and for Manning, with the Giants finishing 8-8 in 2006. Entering the 2007 season, Manning’s record as a starter, including the playoffs, was 20-21.

Coughlin’s coaching job was on the line, and potentially so was Manning’s future with the Giants. But the magical 2007 playoff run altered the trajectory of Manning’s career. The second Super Bowl victory, not insignificantly coming at the expense of New England quarterback Tom Brady, secured Manning’s place in America’s most popular sport.

Soon he was a major sports figure in the New York metropolitan area and beyond. He started appearing in prominent national television commercials, often with his brother Peyton and their father. He hosted “Saturday Night Live,” where he adroitly exhibited his genuine aw-shucks bearing for comic effect.

Although Manning was renowned for never saying much in media interviews — a strategy modeled after another New York athletic star of the era, Derek Jeter — his teammates and the reporters regularly covering the team came to appreciate a droll, biting sense of humor. At the right moments, he could lampoon his own image or media coverage of it. In the locker room, he was unmatched as a prankster.

Earlier, Manning had also instructed the waiter to add an extra two or three zeros to the check. Manning would keep a straight face for the next few minutes before letting his new teammate in on the ruse.

The four years after the 2011 championship season were down years for the Giants, and Manning’s statistics slumped along with the team’s. A low point came in 2013 when the Giants lost their first six games and Manning ended up leading the league with 27 interceptions. Manning, for the first time since his earliest years as a pro, was being harshly criticized in the New York and national media and occasionally booed at home games.

Coughlin was forced out as head coach after the 2015 season. His replacement, Ben McAdoo, rallied the Giants to an 11-5 season. But the Giants were defeated in their opening playoff game in Green Bay. When the Giants lost nine of their first 11 games in 2017, McAdoo hatched a plan that would have Manning start games but be replaced at halftime by his backup, Geno Smith.

Manning dismissed the arrangement and told McAdoo to start Smith if that was the plan. When the benching was announced, Giants fans flooded local sports talk radio with their angry, incensed disapproval of how Manning, still a hero in their eyes, was treated.

The outcry led to Manning’s being reinstalled as the starter and quickly led to McAdoo’s dismissal.

Under Pat Shurmur, who followed McAdoo and was fired last month, a Manning revival was predicted, but it never materialized. The 2018 Giants stumbled to a 5-11 record. In the off-season, with Manning approaching the last year of a lucrative contract, the Giants used their first-round pick to take quarterback Daniel Jones from Duke University.

Manning started the first two games before Jones supplanted him in September. But on Dec. 15, because of an ankle injury to Jones, Manning was awarded a final start at MetLife Stadium. He led the team to victory, snapping a nine-game losing streak. In the game’s closing moments, Manning was taken out of the game. Fans and teammates responded with a long ovation.

Manning most likely could have signed with another N.F.L. team next season. But years ago, he predicted that when the time came to retire, he would recognize it.

“We always tell each other, ‘Play each game like it’s your last because it might be,’” Manning said, adding: “But you think you’ll always be able to keep going. We all make a plan to play a certain number of years. The N.F.L. has other plans.”