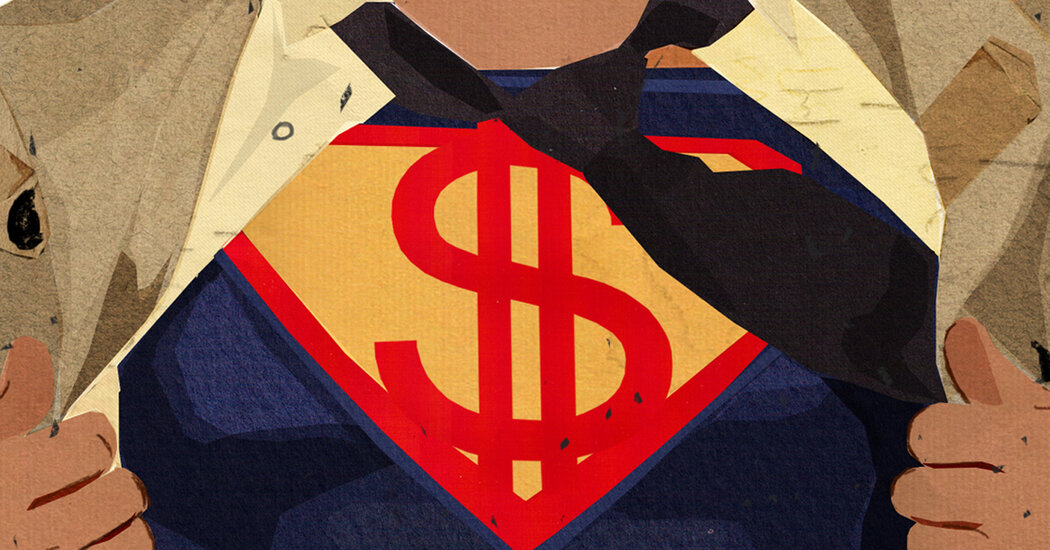 In the movie “Justice League,” there’s a moment when the Flash, a young and overeager Ezra Miller, asks the glowering Batman (Ben Affleck) what his superpower is.

It’s a joke, and it’s not a joke. Bruce Wayne’s vast fortune is indeed what allows the Batman to be the Batman, a grown adult who spends most of his free time pursuing his obsessive hobby of being a costumed crime fighter, with an immense arsenal of high-tech equipment that he uses as if it’s disposable. And Wayne is far from the only masked capitalist from comic books. His fellow super-rich heroes include Oliver Queen (Green Arrow) and Tony Stark (Iron Man). These men (and they are pretty much all men) were born out of the very real American impulse to believe that with great wealth comes great virtue — even when the wealth is inherited, as is the case for all three of these superheroes.

America is hardly the only place that sees the rich as a special breed that plays by special rules. But America’s brand and “American Dream” mythology are anchored in the valorization of individual success. We’ve always glorified nonconformists, rebels and “good guys with guns,” even when their achievements elide the vital contributions of others, or when they’re fighting in the service of a lost and unworthy cause, or when they put others in danger. It’s hardly surprising then that, in the 1940s and 1950s, the burgeoning comic book industry would invent a pulp pantheon of heroes endowed with magic powers and extraordinary valor, who fought crime, delivered inspirational wartime messages and derided Communism. These superheroes served as proof positive that anyone could soar above the skyline in meritocratic America — with the right combination of hard work, good fortune and radioactive spider venom.

It’s one thing, however, when the exploits of superwealthy superheroes are limited to fiction. It’s another when they bleed over into real life.

With wealth inequality reaching another high in America — the top 0.1 percent owning roughly the same share of American wealth as the bottom 85 percent combined — we’ve seen more and more billionaires swooping in to try to save the day. They seek to personally shoulder the world’s problems, big and small, in flamboyant public fashion, often declaring their intent with spontaneous announcements on social media. (Meanwhile, many of these powered-up plutocrats were recently exposed for paying little or nothing by way of taxes.)

When not cranking out batteries and electric cars, hosting “Saturday Night Live” or planning to colonize Mars, the Tesla billionaire Elon Musk is jumping into Earth crises with well-intentioned but often unworkable solutions: trying to save children trapped in an underground cavern in Thailand with a sub built out of rocket parts (“state of the art” but “not practical for our mission,” said regional officials); bringing power back to Puerto Rico after Hurricane Maria (with mixed success, according to locals); and providing ventilators for Covid patients (a “fiasco,” said the headline of a piece by the editorial board of The Sacramento Bee). Some of Mr. Musk’s fellow billionaires are taking on even bigger monsters: Bill Gates is spending his software fortune to fight global disease, poverty and inequity. Mark Zuckerberg is underwriting moonshot solutions to fix voting and racism. Jeff Bezos is investing billions to create a network of free Montessori-like preschools.

These are worthy causes, to be sure. They’re also enormous, structural challenges that global governments have struggled with for generations. And yet these visionary megamoguls believe they can overcome them in their spare time, through the power of concentrated cash and “out-of-the-box,” “disruptive” thinking, nearly always involving technology.

The problem with out-of-the-box approaches is that they tend to ignore the on-the-ground realities faced by actual human people. The problem with disruption is that it’s by definition in conflict with existing systems — which means end-running or sidelining incumbent institutions and infrastructure in local communities. And the problem with technology is that it accelerates and amplifies everything, which might get beneficial solutions to more people faster, but also runs the risk of turning small mistakes into full-blown catastrophes.

More honest portrayals of fictional superplutocrats acknowledge all this. In the Marvel Universe, the billionaire Tony Stark is brilliant and well meaning, but also a narcissistic, self-indulgent boy-man; he makes snap decisions without consideration as to their impact on “little people,” and he and his fellow Avengers get hundreds of Sokovians killed in the process. He conceives of a global security system that will end all war, putting a “suit of armor around the world”; and the result is a killer android that’s set on extinguishing humanity. (Vast wealth can also help cover up for the collateral wreckage caused by mavericks run amok — Stark underwrites an official “cleanup force” called Damage Control that quietly addresses the destruction and mayhem caused by heroic interventions in the Marvel Universe.)

Stark’s real-world counterparts seem to have caused some damage too. The Bill and Melinda Gates Foundation has loomed so large over the global public health landscape that some experts worry it has effectively privatized health decision-making in emerging countries, pushing them toward Western drugs rather than sustainable systemic health reforms. Mr. Zuckerberg’s foundation reportedly killed a voter data project that might have put too close a spotlight on Facebook’ user data scandal involving the 2016 election. And Mr. Bezos’s foray into free Montessori-like schools has been derided by some as just the first step toward a takeover of childhood education: “Amazon Primary,” if you will.

While some philanthropists of previous generations were satisfied to write a check, then show up to cut a ribbon, these present-day problem-solvers want more hands-on involvement in forging a better future — they want to be the man inside the high-tech armor, swooping down from the sky to personally punch problems in the face, to the cheers of adoring crowds.

To be sure, today’s problems are big and intractable, and require enormous resources to address — so what’s wrong with some of those resources coming from the coffers of the superrich? Here again, the superhero analogy is useful. While it might seem obvious that Gotham City needs Batman to fight the supervillains constantly threatening its people, the core of the Batman mythology runs counter to that very thesis: Every Bat-fan knows the canonical truth that the Dark Knight’s nemeses, from the Joker on down, exist only because he exists. Without him, they’re nothing, and vice versa.

Similarly, there’s a sense in which even the low-profile wealthy philanthropists such as Warren Buffett — those that Anand Giridharadas refers to as the “good billionaires” — are seeking to solve problems that on some level they’re helping to create. Can you really fight inequity if you’re a human expression of that inequity? What does it mean when the poverty that you’re hoping to eradicate is a direct result of a system that also created you — when you and the social crisis are “two sides of the same coin,” as Joker so frequently says to Batman?

One billionaire philanthropist who seems to be actively grappling with this inconvenient question is MacKenzie Scott, whose unconventional approach to philanthropy doesn’t involve a foundation bearing her name. The widely dispersed giving by Ms. Scott, the former wife of Mr. Bezos, is “governed by a humbling belief that it would be better if disproportionate wealth were not concentrated in a small number of hands, and that the solutions are best designed and implemented by others,” she wrote recently.

It’s worth considering: How much better off would society be if other billionaires followed suit? What if these wannabe superheroes mothballed their capes and left the problem-solving to the pros — while also simply paying their fair share?

Jeff Yang (@originalspin) edited the Asian American superhero anthologies “Secret Identities” and “Shattered,” and is co-author of the forthcoming book “Rise: A Pop History of Asian America from the Nineties to Now.”