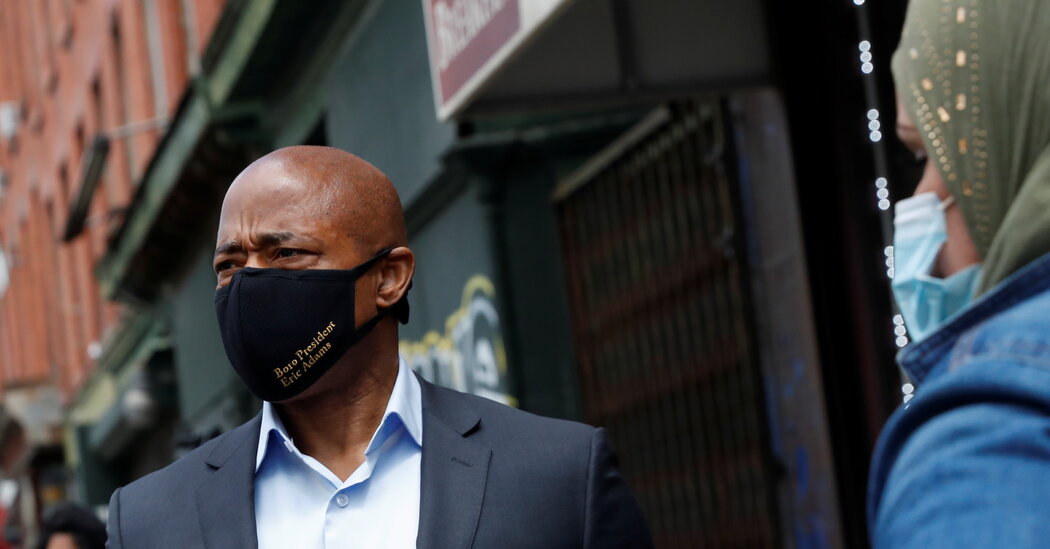 When Ruben Diaz Jr. dropped out of the New York City mayor’s race last year, his decision surprised many. He had the support of the powerful Bronx Democratic Party, an alliance with Gov. Andrew M. Cuomo and strong ties to Latino voters.

But Mr. Diaz, the Bronx borough president, still can influence the race: His endorsement became one of the most coveted in the contest — potentially carrying weight in the Bronx and among Latino voters, who make up roughly one-fifth of Democratic primary voters.

On Monday, Mr. Diaz will announce that he is endorsing Eric Adams, the Brooklyn borough president, boosting Mr. Adams’s hopes of trying to assemble a diverse coalition to defeat Andrew Yang, the former presidential hopeful.

“There have been so many issues where I witnessed firsthand how much Eric loves New York, but also how critical it is to have someone who has the life experience of a New Yorker to help inform them about how to fight for all New Yorkers,” Mr. Diaz said in an interview.

Mr. Diaz, who is of Puerto Rican descent, said that his trust in Mr. Adams was built over a two-decade relationship, and recalled how they met in 1999 at a rally in the Bronx after the police killing of Amadou Diallo, a young Black man whose death became a rallying cry for changes to the Police Department.

His endorsement follows other prominent Latino leaders who have backed Mr. Adams: Fernando Ferrer, the former Bronx borough president who twice ran for mayor, and Francisco Moya, a city councilman from Queens. None of the leading Democratic mayoral candidates is Latino or has strong roots in the Bronx.

Latino voters could be a major factor in the Democratic primary and Mr. Diaz’s endorsement could be significant, said Bruce Gyory, a Democratic strategist who published a lengthy piece this month examining the demographics in the race.

“If you take that endorsement and put resources and energy and outreach behind it, it could become an inflection point for reaching that fifth of the vote that is Hispanic,” he said.

With Mr. Yang leading in the limited polling available, Mr. Adams has tried to consolidate support beyond his base in Brooklyn. Mr. Adams was endorsed by six elected officials in Queens last week, and declared himself the “King of Queens.”

Mr. Adams said in an interview that Mr. Diaz’s endorsement was important for the coalition he was building in Brooklyn, Queens and the Bronx. He said he believed his campaign would speak to Latino voters.

“Public safety, employment, and having affordable housing and a solid school system — these are my messages I’ve been saying for the last 35 years,” he said.

Mr. Adams said he would get that message out through ads and mailers in the coming weeks. Mr. Adams had the most money on hand of any candidate as of the last filing date: more than $7.5 million. He has not yet bought any advertising time on television, but was shooting an ad on Saturday.

All of the mayoral front-runners have been courting Latino leaders. Mr. Yang was endorsed by Representative Ritchie Torres of the Bronx, the first openly gay Afro-Latino member of Congress.

Asked if Mr. Adams was the strongest candidate to beat Mr. Yang, Mr. Diaz said Mr. Adams was the best person to be mayor, but still chided Mr. Yang for leaving the city during the pandemic for his second home in New Paltz, N.Y.

“This is the time when New York needs someone to run the city, not run from the city,” Mr. Diaz said.

County party leaders are not officially endorsing in the Democratic primary. The Bronx Democratic Party, which is led by Jamaal Bailey, a state senator, has not made an endorsement, and neither has the Brooklyn Democratic Party, though its leader, Rodneyse Bichotte Hermelyn, a state assemblywoman, endorsed Mr. Adams.

The city has never had a Latino or Hispanic mayor — except for John Purroy Mitchel, who served a century ago and whom some consider the first Hispanic mayor because he descended from Spanish nobility.

In the mayor’s race this year, Dianne Morales, a former nonprofit executive who is of Puerto Rican descent, is running as a Democrat. Fernando Mateo, a restaurant operator and advocate for livery drivers who was born in the Dominican Republic, is running as a Republican.