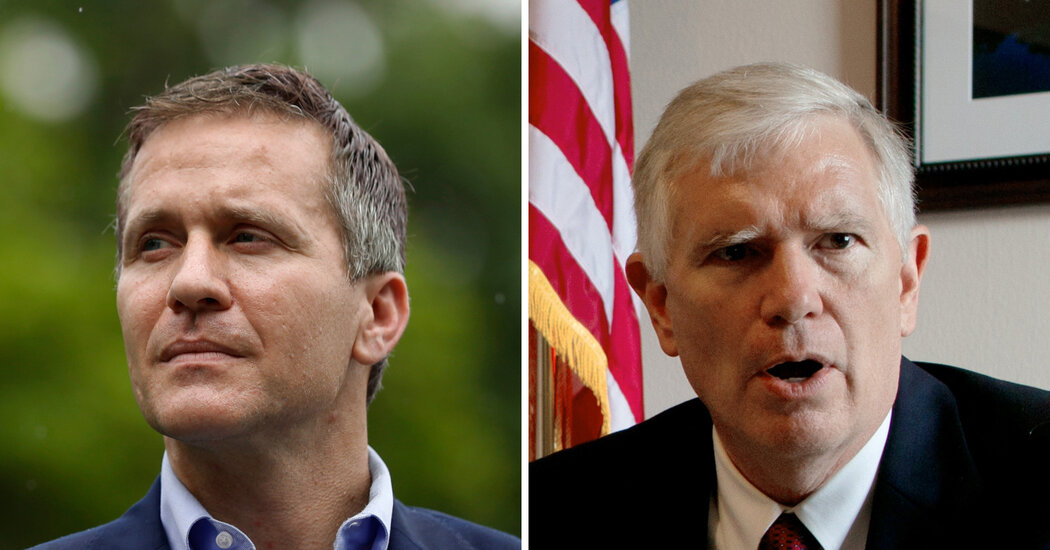 A pair of hard-right politicians announced Senate bids in Missouri and Alabama on Monday night, igniting what are expected to be contentious primary races for open seats in two conservative states.

In Missouri, Eric Greitens, the former governor who resignedafter a scandal involving allegations of sexual misconduct and blackmail, said he would run for the seat being vacated by Senator Roy Blunt, who surprised Republicans this month when he announced plans to retire after next year. And in Alabama, Representative Mo Brooks, a staunch backer of former President Donald J. Trump, joined the race to succeed Senator Richard Shelby, who has also said he will not seek re-election in 2022.

The two announcements, along with a new conservative challenge to the Georgia secretary of state, Brad Raffensperger, who withstood Mr. Trump’s pressure to overturn the state’s election results last year, offer the clearest signal yet that Republicans may face the kind of combative primary season some party leaders had hoped to avoid.

Since Mr. Trump lost the election, Republicans have struggled to unify around a consistent message against the new administration, spending far more time fighting among themselves over loyalty to the former president and the culture war issues that animate his base.

Historically, the president’s party loses seats in its first midterm elections, as the national mood turns against the new administration. But Republicans will face a challenging map in 2022, with few opportunities to flip Democratic-held seats. Party leaders fear that nominating far-right candidates could complicate their ability to hold seats amid a series of Republican retirements, even in more conservative states like Alabama and Missouri.

Mr. Brooks cast himself as one of the former president’s strongest supporters as he announced his Senate bid at a Huntsville gun range, where he was introduced by Stephen Miller, a former adviser to Mr. Trump.

“I have stood by his side during two impeachment hoaxes, during the Russian collusion hoax and in the fight for honest and accurate elections,” he said in an interview with Fox News. “The president knows that. The voters of Alabama know that, and they appreciate it.”

Mr. Brooks, 66, a six-term congressman, was one of the first members of Congress to publicly declare that he would object to certifying President Biden’s election victory. He faced calls for censure from Democrats after remarking at the rally that preceded the Capitol riot in January that it was time to “start taking down names and kicking ass.” Mr. Brooks has said the phrase was misconstrued as advocating for the violence that followed.

“Nobody has had President Trump’s back more over the last four years than Mo Brooks,” Mr. Miller said in his opening remarks. “Now I need you to have his back.”

Polling shows that the vast majority of Republican voters remain devoted to the former president. In a Suffolk University/USA TODAY poll last month, nearly half of Trump voters even said they would abandon the G.O.P. completely and join a Trump party if he decided to create one.

But Mr. Brooks isn’t the only Republican in the race eager for Mr. Trump’s blessing in a state that the former president won by over 25 percentage points. Lynda Blanchard, a businesswoman and former Trump ambassador, has already entered the contest, which is expected to attract a number of other candidates.

Mr. Greitens, 46, is also running under the banner of the former president, though it remains unclear whether Mr. Trump will endorse his bid.

Once considered a rising Republican star, Mr. Greitens faced months of allegations, criminal charges, angry denials and court proceedings after explosive allegations of an affair, sexual misconduct and blackmail involving his former hairstylist became public. He resigned in 2018, less than two years into his term; he was never convicted of a crime.

Renounced by his biggest donors and former strategists, Mr. Greitens has been championed by some in Mr. Trump’s orbit and is a frequent guest on a podcast hosted by the former Trump adviser Steve Bannon.

In an interview on Fox News announcing his bid, Mr. Greitens claimed he had been “exonerated” by investigators and had resigned only for his family.

The prospect of the disgraced former governor running again has alarmed some Republicans who fear he could cost the party what is considered to be a relatively safe seat. Some strategists worry that Mr. Greitens could emerge with a plurality if a large number of Republican candidates enter the race.