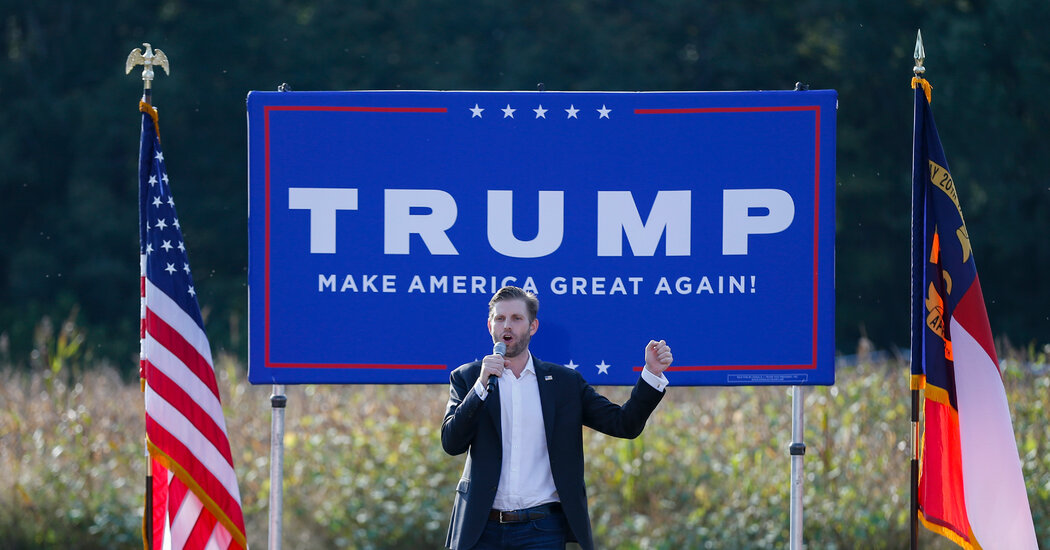 Appearing on the ABC News program “This Week,” Eric Trump deflected when asked to comment on the investigation. He denounced the news media, listed what he said were accomplishments of his father’s administration, insinuated financial impropriety by Joseph R. Biden Jr. and said his father had “lost a fortune” as a result of being president.

But he did not rebut any of The Times’s specific findings or give a clear answer to any of the questions asked by the host, Jon Karl.

In contrast to the president’s contention that he was a Washington outsider who would “drain the swamp” when he took office, The Times investigation revealed that Mr. Trump not only did not disentangle himself from his business empire, but that a pay-to-play culture had permeated his presidency.

Mr. Trump turned his own resorts into the Beltway’s new back rooms, with companies and other special-interest groups spending millions booking conferences and rooms at his hotel in Washington and other properties, and on membership fees at his Mar-a-Lago club in Florida. They have been able to parlay their access to the president into federal funding, contracts, regulatory changes and ambassadorships.

When Mr. Karl suggested to Eric Trump that the Times investigation showed “at the very least a huge appearance of a conflict of interest,” Mr. Trump said that tens of millions of people stayed at the family’s properties every year — seemingly playing down the significance of the patronage from special-interest groups and foreign governments. The president placed his two adult sons at the helm of the Trump Organization when he took office in 2017, but The Times reported that he still kept watch on properties run by the company.

The Times’s investigation found that President Trump’s finances had been in steep decline for several years before he entered the White House. The pace of massive profits that flowed his way thanks to “The Apprentice” — a total of $427.4 million from the show, endorsements, and licensing deals — had fallen sharply and consistently after 2011.

The reporting was part of an ongoing examination of Mr. Trump’s finances by The Times, which revealed that he had used much of his reality television fortune to buy and prop-up a collection of money-losing golf courses that required regular infusions of cash. But when the money from entertainment fell, he sold off more than $200 million in stocks and bonds, leaving him with comparatively little, and burned through much of the cash on hand in his businesses.

The investigation also found that regular large losses at Mr. Trump’s core businesses wiped away much of the income tax obligation on his entertainment fortune. After refunds, Mr. Trump paid no federal income taxes in 11 years from 2000 through 2017, and only $750 in two other years. He also faces an active I.R.S. audit of a $72.9 million tax refund that he claimed, and received, after declaring huge losses nearly a decade ago. The investigation also found that he had personally guaranteed more than $300 million in loans coming due within four years.