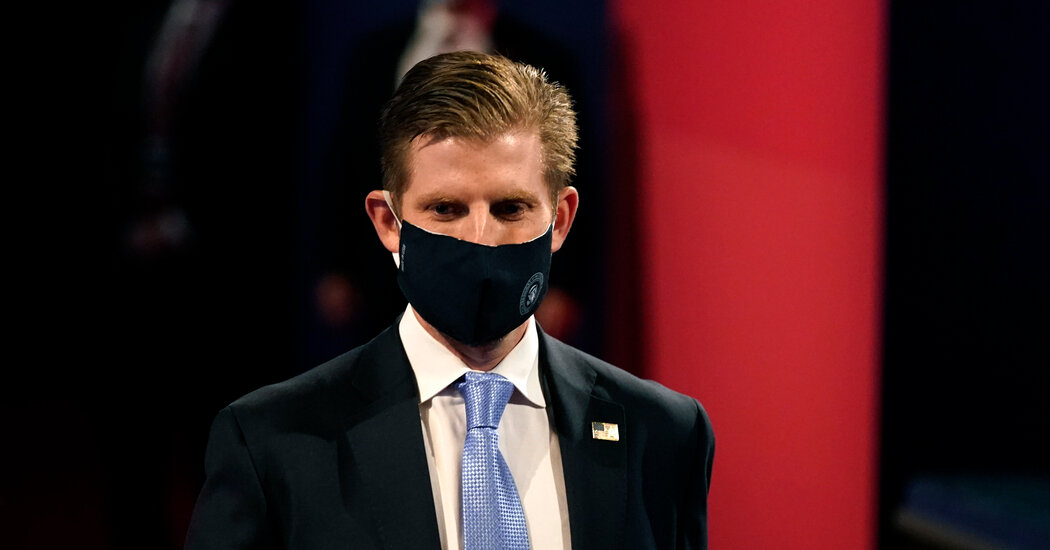 After months of delays, President Trump’s son Eric was questioned under oath on Monday as part of a civil investigation by New York’s attorney general into whether the Trump family’s real estate company committed fraud.

The deposition came less than a month before the presidential election. And while the interview was not made public, the mere fact that it happened before Election Day was a victory for the attorney general, Letitia James, whose inquiry is one of several legal actions the president and his company, the Trump Organization, are facing.

Ms. James’s office declined to comment about what was discussed in the deposition, which was conducted remotely and ended around 5 p.m. It was unclear when the questioning began.

The attorney general’s investigation is focused on whether the Trump Organization inflated its assets to get bank loans and tax benefits.

In August, Ms. James, saying the company had tried to stall the inquiry, asked a judge to order Eric Trump, an executive vice president at the Trump Organization who runs its day-to-day operations, to answer questions under oath and to order the company to turn over documents.

Ms. James, a Democrat, sought the order after Mr. Trump pulled out of an interview with her office in July, and after the company said that it and its lawyers would not comply with seven subpoenas.

Eric Trump’s lawyers responded to Ms. James’s move by arguing that he was willing to be interviewed by lawyers from the attorney general’s office, but only after the election.

The delay was necessary, Mr. Trump’s lawyers said, because their client was busy campaigning for his father and because he did not want his deposition to be used “for political purposes.”

But Justice Arthur F. Engoron of State Supreme Court in Manhattan rejected those arguments and ordered Eric Trump to sit for a deposition no later than Oct. 7.

“This court finds that application unpersuasive,” the judge said from the bench after a two-hour hearing on Sept. 23. “Mr. Trump cites no authority in support of his request, and in any event, neither petitioner, nor this court, is bound by timelines of the national election.”

Justice Engoron also ordered the Trump Organization and several related entities and lawyers to turn over records connected to four of the properties that Ms. James is scrutinizing.

Eric Trump reacted to the ruling by assailing the attorney general’s investigation as “a continued political vendetta.” Nonetheless, he added, “since I previously agreed to appear for an interview, I will do so as scheduled.”

Ms. James began her inquiry last year after the president’s former personal lawyer, Michael D. Cohen, told Congress that Mr. Trump had overstated the value of his assets in financial statements when seeking bank loans and had understated them to reduce real estate taxes.

The investigation is focused on a number of Trump properties, including several that came up during Mr. Cohen’s congressional testimony. Those that were the subject of the subpoenas were the Seven Springs estate in Westchester County, N.Y., the Trump International Hotel and Tower in Chicago, 40 Wall Street in Lower Manhattan and the Trump National Golf Club, Los Angeles.

Court documents released in August suggested that there were concerns within the Trump Organization that the attorney general’s civil inquiry could develop into a criminal investigation.

Last year, Ms. James reached a settlement with the president under which he admitted misusing money from a personal foundation to promote his campaign and pay off business debt.

The other legal matters facing President Trump include an inquiry by the Manhattan district attorney’s office, which has suggested in court filings that it is investigating whether he and the Trump Organization possibly committed financial crimes and insurance fraud, and is fighting in federal court to obtain his tax returns.

Mr. Trump’s finances came under added scrutiny when The New York Times published a detailed investigation that, among other things, found he paid only $750 in federal income taxes in 2016 and 2017 and no income taxes at all in 10 of the previous 15 years.