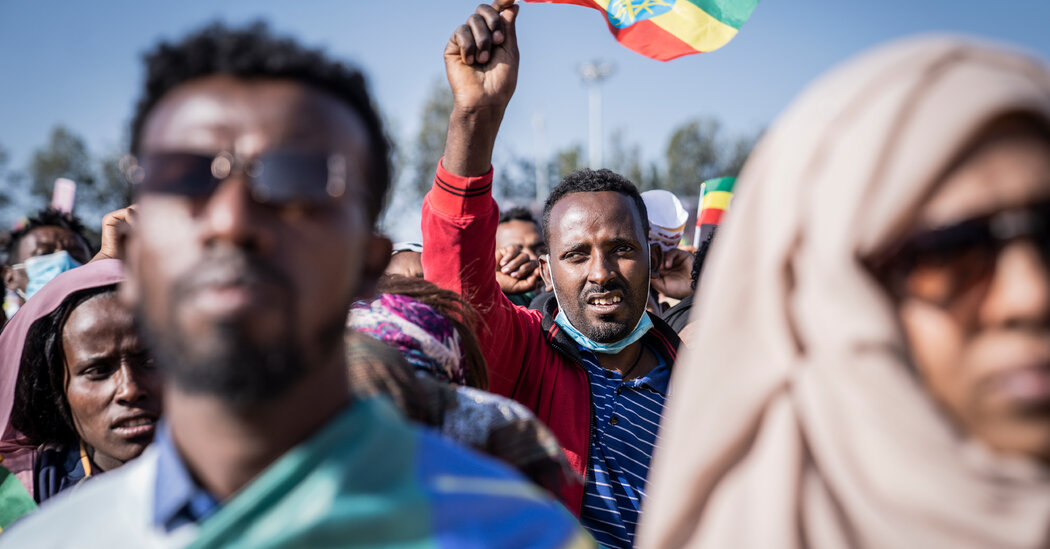 Thousands of people killed, more than two million internally displaced and nearly a million facing famine. The conflict in Ethiopia, begun a year ago when Prime Minister Abiy Ahmed launched a military assault on the Tigray region, is spiraling out of control.

The crisis has been building since June, when Tigrayan fighters took back control of much of the Tigray region and, emboldened, crossed into neighboring regions. After an uneasy hiatus, government forces last month tried to push them back. But the Tigrayan fighters repulsed the offensive and, in a stunning reversal of fortune, captured strategically important towns on the way to the capital, Addis Ababa.

In response, the government declared a nationwide state of emergency and Mr. Abiy, using bellicose and jingoistic rhetoric, urged civilians to take up arms. There has since been a sweeping crackdown against ethnic Tigrayans in the capital and other parts of the country, and 16 local United Nations employees were detained. An atmosphere of chaos has gripped the city.

For good reason. Ethiopia, the continent’s second-most-populous country and bulwark of the strategically important Horn of Africa region, is tearing itself apart. The country’s ethnic-based federal system, which has held for close to three decades, could be shattered. But a negotiated settlement — even peace — is still just about possible. With the help of the African Union and the United States, the two warring sides can pull the country back from catastrophe.

Few could have expected things would come to this, not least Mr. Abiy himself. When the prime minister ordered the military attacks against Tigray in early November last year, he said that the campaign would be a brief surgical operation with “clear, limited and achievable objectives.” Mr. Abiy and his supporters calculated that Tigray, regarded as the final obstacle to the prime minister’s unilateral move to reconstruct the identity and character of the Ethiopian state, could be subdued in a matter of weeks. It was a calamitous error.

Instead, the conflict stretched on for months, racking up terrible losses. Civilians bore the brunt of a brutal campaign, which saw ethnic cleansing, sexual violence and mass murder. These atrocities, perpetrated predominantly by the Ethiopian Army, Eritrean troops and allied militias, stunned society, inflaming divisions and deepening polarization.

Previously garlanded by the West — he received the Nobel Peace Prize in 2019 — Mr. Abiy became the object of international criticism, condemned for his role in the conflict. An election in June, intended to burnish his democratic credentials and cement his rule, did nothing to improve the situation. Then came a string of military setbacks, as the Tigrayan forces mounted a remarkable counterattacking campaign and began coordinating with the Oromo Liberation Army, a rebel group in the Oromia region. Last week, together with seven other opposition groups, they formed an alliance to replace Mr. Abiy’s government.

As Mr. Abiy’s military options dwindled and his legitimacy ebbed away, his government quietly expressed its readiness to negotiate. “We cannot keep on fighting because no country would sustainably keep on fighting,” Redwan Hussein, the state minister of foreign affairs, told a large group of diplomats and international organizations in early November. “Eventually any conflict would have to be ended through a negotiated and peaceful manner.”

Diplomats and regional leaders reacted quickly, scaling up their efforts to secure a cease-fire and lay the foundation for a negotiated political settlement. The United States’ special envoy to the Horn of Africa, Jeffrey Feltman, met with Ethiopian and Kenyan authorities, and the African Union’s high representative for the Horn of Africa, Olusegun Obasanjo, held talks with Ethiopian authorities and the Tigray leadership.

It’s a start, but more must be done. It will take an active and concerted effort by the United States, the African Union and neighboring countries to convene an inclusive, credible dialogue that could lead to a sustainable political settlement. The international community must be prepared to use all the tools at its disposal — sanctions, pressure and funds — to incentivize both sides to come to terms.

But ultimately, the future will depend on the Ethiopian parties themselves. There is currently a deep distrust of Mr. Abiy’s intentions, and many believe that he would simply use a cease-fire to buy time to regroup, rearm and strengthen his forces. What’s more, Tigrayan and Oromo forces seem to believe that they can unseat Mr. Abiy militarily and establish a transitional government. The blizzard of incendiary rhetoric — Mr. Abiy describes Tigrayan forces as “weeds” and a “cancer,” and Tigrayan leaders refer to him and his government as “fascist” — makes negotiating in good faith especially difficult.

Yet all is not lost. Both sides may hope they can prevail, without recourse to a settlement. But the situation is so dire — combining man-made famine, economic meltdown and widespread violence — that neither can afford further protraction. Mr. Abiy’s government is already widely discredited and can no longer hope to wait out its antagonists. As for the Tigrayan and Oromo leaderships, they risk losing public support if the humanitarian crisis continues to metastasize.

It’s a tall order, but both sides must set aside war for peace. The alternative is utter devastation.

Awol Allo (@awolallo) is a senior lecturer in law at Keele University, England.