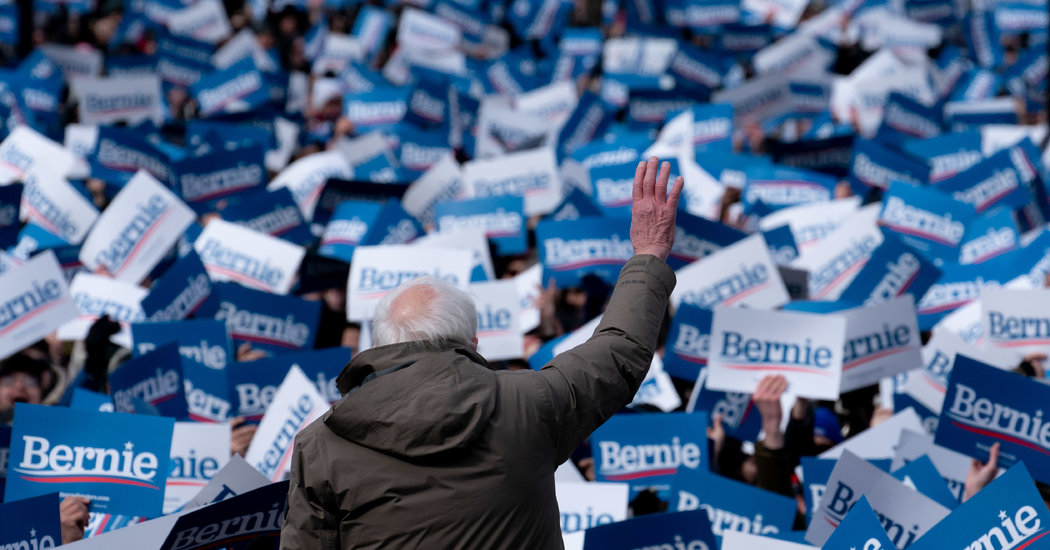 WASHINGTON — With the Democratic presidential contest down to a two-person race, Senator Bernie Sanders has declared that he will wield his signature issue, Medicare for all, as a crucial distinction between his campaign and the surging candidacy of former Vice President Joseph R. Biden.

“Joe essentially wants to maintain what I consider to be a dysfunctional and cruel health care system,” Mr. Sanders said this week, adding that he hoped they could devote an entire debate to the issue.

But an even bigger hurdle than winning the presidency stands between Mr. Sanders and his goal of generous government health insurance for all Americans: Congress.

No legislation to advance or achieve universal health care has succeeded over the past 70 years without Democrats not only controlling all three branches of government, but also having a supermajority in the Senate. At this point, Mr. Sanders’s plan has nowhere near that support.

Just 14 members of the Senate have signed on to his Medicare for All Act, which would require a huge expansion of federal spending, and Democrats would need to pick up four seats in November to gain majority control of the chamber. Even if they succeeded, most of the Democrats seeking to unseat vulnerable Senate Republicans — John Hickenlooper in Colorado, for example, and Mark Kelly in Arizona — have come out against Medicare for all, raising the curious prospect of Democratic Senate candidates opposing the Democratic presidential nominee’s most prized policy plan.

In the House, a similar Medicare for all bill has 119 sponsors, all Democrats, out of a total 435 members — at least 218 votes are needed to pass legislation — and Speaker Nancy Pelosi is not among the supporters. Nor are most of the roughly 40 freshman Democrats known as “front liners,” who helped their party win control of the House in 2018 by flipping Republican seats.

“I’m not sure that the government is prepared or qualified to take over the health care for every single American,” Representative Elissa Slotkin, a Democrat who flipped a Republican district in southern Michigan in 2018, told a local newspaper there.

Whether because of the cost — $34 trillion in new federal spending over 10 years, according to the Urban Institute — or opposition to eliminating private insurance in favor of government control, most congressional Democrats instead support improving the Affordable Care Act or pursuing a new government-run plan, or “public option,” that would compete with private insurance.

A public option is at the core of Mr. Biden’s health plan, but it too could prove extremely challenging to enact, depending on how threatening it seemed to insurers and hospitals. Industry groups that are already mobilizing against Medicare for all could also doom public option legislation, as they did in 2010, when supporters of the Affordable Care Act had to drop a relatively modest public option provision to get the law passed.

It is always possible that sentiments could shift — perhaps sooner rather than later if the coronavirus outbreak were to disproportionately harm people who could not afford care, a possibility Mr. Sanders has already raised. He lost no time in making the case for Medicare for all after Health Secretary Alex M. Azar II suggested while testifying before Congress recently that federal officials would not be able to guarantee that all Americans would be able to afford a coronavirus vaccine if it were to become available.

But for now, many Democratic lawmakers have expressed trepidation that a legislative showdown over Medicare for all would make it impossible to advance other important initiatives, including on climate change and immigration.

And with the Supreme Court’s announcement Monday that it would hear a major new challenge to the Affordable Care Act as soon as this fall, even some who support Medicare for all said that for now, Democrats should unify behind the law, which President Trump’s administration is seeking to invalidate.

Asked in an interview how the House would treat Medicare for all legislation if Mr. Sanders were elected president, Representative Hakeem Jeffries, a co-sponsor on the House Medicare for all bill, promptly changed the subject to the court case.

“There is an unrelenting attack on the health care of everyday Americans, and it seems to me the focus at the moment should be on protecting and strengthening the Affordable Care Act,” said Mr. Jeffries, a New York Democrat who is chairman of the House Democratic Caucus.

History, too, suggests the chances of a President Sanders pushing Medicare for all through Congress would be slim to none. President Harry S. Truman failed to win comprehensive universal coverage in 1950 even with Democrats controlling the House and Senate. That defeat, as John McDonough, a health policy expert at Harvard, noted recently in the journal Health Affairs, led President Lyndon B. Johnson to seek a less ambitious fallback 15 years later: universal coverage limited to older people in his 1965 legislation that created Medicare, a historic accomplishment in its own right.

“If Democrats can further advance toward near-universal coverage without the life-or-death struggles of Medicare for All,” Mr. McDonough wrote, “they might just achieve meaningful and historic progress even as they preserve the political capital to make progress on other compelling and urgent policy needs.”

Mr. McDonough also pointed out that the landmark coverage expansions in 1965 (which also created Medicaid, but for a very limited group at the time) and in 2010 with the Affordable Care Act were passed not merely by a Democratic-controlled Congress, but also with Democratic supermajorities in the Senate.

“There’s no prospect of having majorities like that,” said Paul Starr, a professor of sociology and public affairs at Princeton University. “It’s not going to happen.”

Even if the rules were changed to get rid of the filibuster, making it possible to pass major legislation with only 50 Senate votes, “there is not any guarantee that the 51st Democrat would be willing to support Medicare for all or anything close to it,” said Mark Peterson, a professor of public policy, political science and law at the University of California, Los Angeles.

Rep. Pramila Jayapal, Democrat of Washington, who wrote the House Medicare for all bill, said in an interview that she was not discouraged by the math, noting that since she introduced her bill a year ago, a dozen more members had signed on as co-sponsors, House committees had held four hearings on it, and coalitions representing people of color, labor unions and businesses had begun lobbying for the bill.

“A lot of the members I speak to that aren’t on the bill, I actually believe they would like to be on the bill but think, ‘I don’t know if it’s politically good for me,’” Ms. Jayapal said. “That would fundamentally change if Bernie were to be elected president.”

Proponents of Medicare for all like to cite some polls that suggest there is strong support for the idea. But Mollyann Brodie, who oversees public opinion research at the Kaiser Family Foundation, says only a minority of Democrats are solely in favor of a sweeping Medicare for all plan, compared to a majority who support offering the option of buying a Medicare-like plan or Medicare for all as a way to address high costs and the challenges of getting care.

People are wary of the high taxes that could come with Medicare for all, Ms. Brodie said, partly because they do not necessarily trust the federal government to determine how the dollars are spent.

What also makes Medicare for all unlikely is massive opposition from the health care industry, particularly insurance companies whose very survival is at risk. Hospitals are also opposed, because the federal government typically pays them much less than private health insurers. Being paid at Medicare rates, industry groups say, would cause many hospitals to close and others to lay off their workers.

The industry groups that were largely on board for the Affordable Care Act have already mobilized, through groups like the Partnership for America’s Health Care Future, to squelch any thoughts of Medicare for all. They are aggressively lobbying Congress and spending on television ads, one of which aired during the most recent Democratic debate.

Short of a public option, which all the Democratic presidential candidates besides Mr. Sanders embraced in one form or other, there are more incremental proposals that have broad public and congressional support.

Increasing the generosity of premium subsidies for people who buy coverage through the Obamacare marketplaces, as California has already done, is one such idea. Another is to offer premium subsidies to adults with incomes below the poverty level in states that have not expanded Medicaid, a population that is still largely uninsured.

Ms. Jayapal acknowledged that short of a rapid sea change in public attitudes, full Democratic control of Congress would be necessary to even begin moving forward on Medicare for all. She noted, however, that congressional Republicans have fallen in line behind Mr. Trump’s agenda to an extent that no one predicted, and said the same could happen with Democrats and Mr. Sanders.

“A president can lead his or her party to a different place in a very short period of time,” she said. “Sometimes we think the tipping point is much further away than it actually is.”