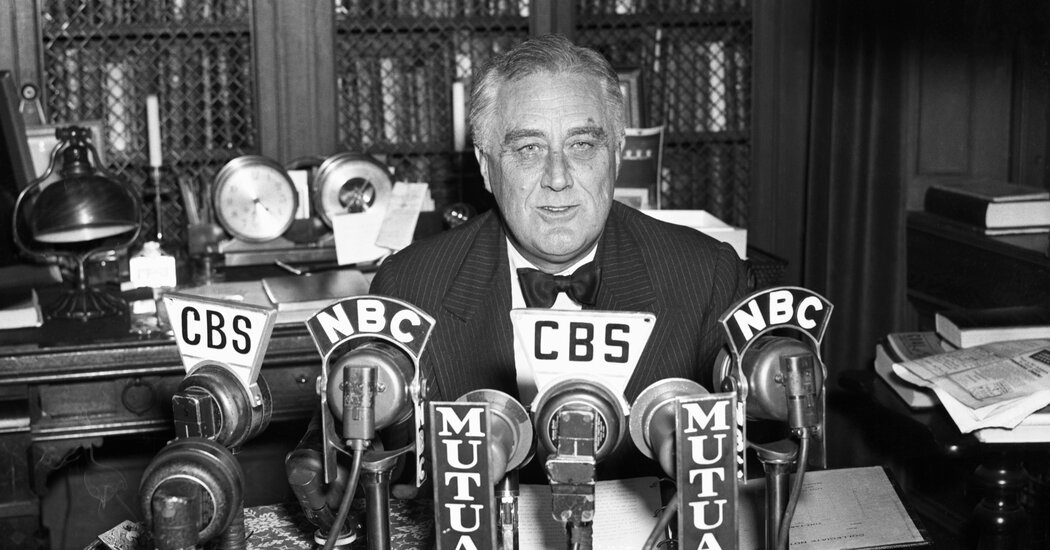 He saved democracy itself.

“I pledge you, I pledge myself, to a new deal for the American people,” Franklin Roosevelt declared at the 1932 Democratic National Convention in Chicago.

Roosevelt had broken tradition to accept his party’s nomination and deliver a speech in person. And in that speech, he promised a program based on the “simple moral principle” that the “welfare and the soundness of a nation depend first upon what the great mass of the people wish and need” and second on “whether or not they are getting it.”

Aware of the challenge ahead of him should he win the presidency — nearly a quarter of Americans were out of work and the economy was shrinking by double digits — Roosevelt concluded his address with a call to action. “Let us all here assembled constitute ourselves prophets of a new order of competence and of courage,” he said. “This is more than a political campaign; it is a call to arms. Give me your help, not to win votes alone, but to win in this crusade to restore America to its own people.”

These days we tend to think of the New Deal as a very large stimulus program. And that was true, to an extent. The Public Works Administration, established under the National Industrial Recovery Act of 1933, spent around $3.3 billion (roughly $65 billion in today’s dollars) on public buildings and infrastructure. The Works Progress Administration, established two years later, went even further, spending almost twice as much over eight years to employ more than 15 percent of the nation’s labor force.

But as Roosevelt suggested in his acceptance speech, the New Deal was bigger than just a recovery program.

Rauchway, a professor of history at the University of California, Davis, writes: “The foundational belief of the New Deal was the conviction that democracy in the United States — limited and flawed through it remained — was better kept than abandoned, in the hope of strengthening and extending it.”

It was not clear, when Roosevelt took office, that democracy would survive the long night of the Depression. To show what could have happened in the absence of recovery, Rauchway recounts the story of the Bonus Expeditionary Force — veterans of the First World War who occupied parts of Washington in the last months of the Hoover administration, demanding early payment of their “bonus,” or promised compensation, for service. On one hand were the marchers, thousands of disaffected veterans and their families, and their leader Walter Waters, who drew inspiration from Mussolini’s Black Shirts and Hitler’s Brown Shirts, and who proposed reinventing his Bonus Army as a new “Khaki Shirt” organization.

The Bonus Army’s newspaper drew international comparisons to prove the veterans’ importance: “For five years Hitler was lampooned and derided, but today he controls Germany. Mussolini before the war was a tramp printer driven from Italy because of his political views. But today he is a world figure … The Khaki Shirts would be essentially American” — though similar to the backers of those strongmen overseas.

On the other hand were those Americans at the top who believed democracy had failed the country. In Gen. Douglas MacArthur’s draconian response to the Bonus marchers — burning their camps and driving them out of the city, against President Herbert Hoover’s explicit orders — they saw a model for how the government might restore “order” to the United States. “To his aide Rexford Tugwell,” Rauchway notes, “Roosevelt described Douglas MacArthur as one of the ‘most dangerous men in the country.’”

MacArthur appealed to Americans who yearned for a strongman, who believed “democracy had run its course and that the totalitarians had grasped the necessities of the time.” Roosevelt said that among people he knew — rich people, who came from privileged backgrounds and who found the mobilized people deeply alarming — such talk was commonplace.

Roosevelt had to prove to all Americans that self-government worked; that it could restore confidence and tackle the economic crisis without compromising the principles of the revolution and the founding. That’s why Roosevelt embraced public employment and its direct line to ordinary Americans, so government could “restore the close relationship with its people which is necessary to preserve our democratic form of government.” That’s why he would direct his administration to build dams in the Tennessee Valley, bridges in California’s Bay Area and a second tunnel connecting New Jersey and New York — to show Americans that the government could do big things and do them well. The New Deal libraries and parks and postal offices and other buildings also stand as monuments to collective effort and the public good, to the idea that democracy works best when it works for most of us, and that through this effort, we come closer to the “more perfect union” of our Constitution’s preamble.

The New Deal was not perfect. It liberated some Americans from want at the same time that it deprived others of their freedom. It opened new opportunities for Black Americans — providing jobs, education and even housing to citizens who lived in need of each — at the same time that it, as Rauchway writes, “left existing segregation untouched and even expanded it into new areas, perpetuating it for new generations.” And yet the breakthrough of the New Deal — the way it reshaped the nation’s politics and transformed the relationship between state and citizen — set the stage for the social revolutions of subsequent decades. The New Deal brought, in Roosevelt’s phrasing, “the broadening conception of social justice” to American life. And once introduced, it could not be removed. Or, as he said in his January 1934 message to Congress,

Civilization cannot go back; civilization must not stand still. We have undertaken new methods. It is our task to perfect, to improve, to alter when necessary, but in all cases to go forward.

Put another way, you can think of the New Deal as a third founding moment in the history of American democracy. And in the same way that we still struggle to live up to the ideals of political equality expressed in our first founding and those of racial equality expressed in our second, we have not yet realized the ideal of economic equality and opportunity put forth in the New Deal.

That’s why at this moment of crisis — for our economy, for our climate and for our democracy — the New Deal remains a lodestar for liberals and the left alike, from Joe Biden to Alexandria Ocasio-Cortez. It is a model, it is an aspiration, it is a live part of our political imagination.