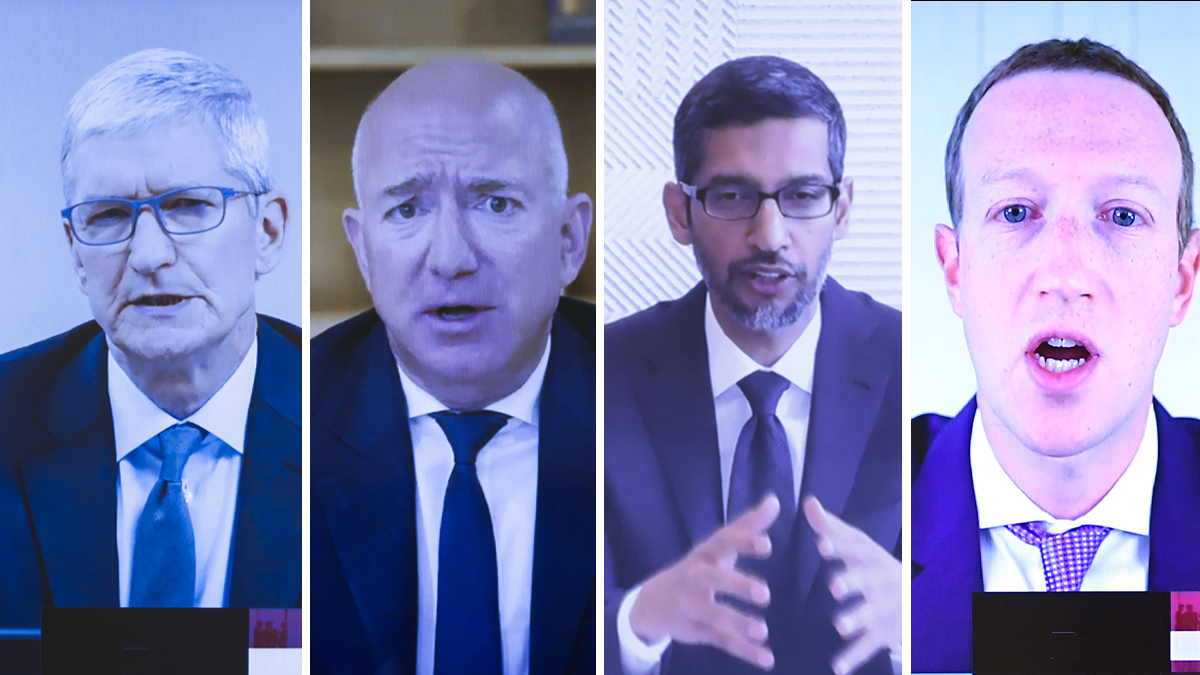 A Democratic congressional staff report recommends changes to antitrust laws and enforcement that could result in major changes for Big Tech companies like spinning off or separating parts of their businesses or making it harder to buy smaller companies.

The staff found, after a 16-month investigation into competitive practices at Apple, Amazon, Facebook and Google, that the four businesses enjoy monopoly power that needs to be reined in by Congress and enforcers.

In a nearly 450-page report, the Democratic majority staff laid out their takeaways from hearings, interviews and the 1.3 million documents they scoured throughout the investigation.

You can read the full report here.

The recommendations from Democratic staff include:

Republicans have voiced objections to some of the bolder proposals in the report, such as imposing structural separations. Rep. Ken Buck, R-Colo., a key ally of the subcommittee majority who has been in favor of antitrust reform, has prepared his own response to the report outlining areas of “common ground” and “non-starters,” according to a draft version obtained by CNBC.

Following the majority report’s release, Judiciary Committee ranking member Rep. Jim Jordan, R-Ohio, put out his own response about allegations of platforms’ bias against conservatives, which the companies have repeatedly denied. Four other Republicans signed onto the report, including Buck and former Judiciary ranking member Doug Collins of Georgia, and subcommittee members Reps. Matt Gaetz and Greg Steube of Florida.

Buck stressed in his own response, however, that he is supportive of the investigation and its findings and continues to push for bipartisan antitrust reform.

Subcommittee ranking member Rep. Jim Sensenbrenner, R-Wis., said in a statement that while he does not approve of sweeping changes to the antitrust laws, “There actually is a lot that we agree on, including the lack of sufficient scrutiny on past activity by these companies.”

He expressed support for greater funding of antitrust enforcers but said he was skeptical of the Glass-Steagall type of approach, presumptive bans on merger activity and mandates for data interoperability, fearing it would stifle innovation.

The Democratic report found that the four tech companies enjoy monopoly power in their respective domains. Below are some of the key findings the staff laid out in the report for each company:

Facebook enjoys monopoly power in the online advertising and social networking markets, according to the report.

One surprising finding in the course of the investigation had to do with Facebook’s acquisition of Instagram, according to a counsel for the antitrust subcommittee who spoke with reporters Tuesday. According to the counsel, documents outlining Instagram’s projected growth just before its $1 billion acquisition by Facebook in 2012 painted the picture of a fast-growing company, rather than a weak competitor that might have floundered without Facebook’s help. While there is no way to reverse engineer what would have happened to Instagram were it to remain independent, the question of whether Facebook bought Instagram to squander a growing competitor has been a recurring one for many antitrust observers.

Recommendations by the Democratic majority staff would address the concern that dominant companies may be able to engage in “killer acquisitions” of competitors by shifting the burden onto those companies to prove their deals won’t harm competition.

The report also discusses what it calls the “Cunningham memo,” a document produced in 2018 by a senior Facebook data scientist named Tom Cunningham that was first reported by The Information in 2019. According to the report, it was prepared for senior executives including Facebook CEO Mark Zuckerberg.

In an interview with the subcommittee staff, a former senior employee at Instagram who sat in on meetings as the memo was being prepared said the document was meant to answer how the company could “position Facebook and Instagram to not compete with each other,” according to the report. The former employee told the staff in an interview cited with Friday’s date that then-Instagram chief Kevin Systrom “wanted Instagram to grow naturally and as widely as possible. But Mark was clearly saying ‘do not compete with us.’ … It was collusion, but within an internal monopoly.”

CNBC previously reported that new information on the Facebook-Instagram deal from a whistleblower had prompted the report’s first delay, according to a source.

“Facebook is an American success story. We compete with a wide variety of services with millions, even billions, of people using them,” a Facebook spokesperson said in a statement. “Acquisitions are part of every industry, and just one way we innovate new technologies to deliver more value to people. Instagram and WhatsApp have reached new heights of success because Facebook has invested billions in those businesses. A strongly competitive landscape existed at the time of both acquisitions and exists today. Regulators thoroughly reviewed each deal and rightly did not see any reason to stop them at the time.”

Amazon has monopoly power over most of its third-party sellers and many of its suppliers, the majority staff alleges.

Amazon’s market share of U.S. online retail sales is “likely understated” at 40%, according to the report, which says “more credible” estimates place it around 50% or more.

The staff claim “Amazon’s market power is at its height” when it comes to its relationship with third-party sellers on its platform.

“Amazon has engaged in extensive anticompetitive conduct in its treatment of third-party sellers,” the report’s authors write. “Publicly, Amazon describes third-party sellers as ‘partners.’ But internal documents show that, behind closed doors, the company refers to them as ‘internal competitors.'”

Amazon has argued in written statements and testimony that it relies on its third-party sellers to fuel its platform and that it would not be in its interest to work against them. The staff argues, however, “Amazon’s dual role as an operator of its marketplace that hosts third-party sellers, and a seller in that same marketplace, creates an inherent conflict of interest. This conflict incentivizes Amazon to exploit its access to competing sellers’ data and information, among other anticompetitive conduct.”

The authors also claim Amazon reached its dominance partly through acquiring competing sites such as Diapers.com and Zappos as well as adjacent businesses to add customer data and “shor[e] up its competitive moats.”

In a statement, an Amazon spokesperson said: “All large organizations attract the attention of regulators, and we welcome that scrutiny. But large companies are not dominant by definition, and the presumption that success can only be the result of anti-competitive behavior is simply wrong. And yet, despite overwhelming evidence to the contrary, those fallacies are at the core of this regulatory spit-balling on antitrust. This flawed thinking would have the primary effect of forcing millions of independent retailers out of online stores, thereby depriving these small businesses of one of the fastest and most profitable ways available to reach customers. For consumers, the result would be less choice and higher prices. Far from enhancing competition, these uninformed notions would instead reduce it.”

Apple’s monopoly power exists in the market for software app distribution on iOS devices, according to the Democratic staff.

The report says Apple’s mobile ecosystem has provided “significant benefits” to both consumers and app developers. Even so, the report alleges Apple uses its control of its operating system and app store “to create and enforce barriers to competition and discriminate against and exclude rivals while preferencing its own offerings.”

The staff also alleges Apple uses its market power “to exploit app developers through misappropriation of competitively sensitive information and to charge app developers supra-competitive prices within the App Store.”

In the past year, Apple has faced a growing number of app developers complaining about its rules and commission in exchange for placement on its App Store. Most recently, Apple faces a lawsuit from Epic Games over such complaints.

“In the absence of competition, Apple’s monopoly power over software distribution to iOS devices has resulted in harms to competitors and competition, reducing quality and innovation among app developers, and increasing prices and reducing choices for consumers,” the staff wrote.

In a statement, Apple said, “The App Store has enabled new markets, new services and new products that were unimaginable a dozen years ago, and developers have been primary beneficiaries of this ecosystem. Last year in the United States alone, the App Store facilitated $138 billion in commerce with over 85% of that amount accruing solely to third-party developers. Apple’s commission rates are firmly in the mainstream of those charged by other app stores and gaming marketplaces. Competition drives innovation, and innovation has always defined us at Apple. We work tirelessly to deliver the best products to our customers, with safety and privacy at their core, and we will continue to do so.”

Google has a monopoly of the online general search and search advertising markets, the majority staff concluded.

It described Google’s dominance as operating “as an ecosystem of interlocking monopolies.” By linking together various services with extensive user data, Google is able to reinforce its dominance, the report alleges.

Based on internal communications from Google, the staff wrote, “Google exploits information asymmetries and closely tracks real-time data across markets, which—given Google’s scale—provide it with near-perfect market intelligence. In certain instances, Google has covertly set up programs to more closely track its potential and actual competitors, including through projects like Android Lockbox.”

Google has been able to maintain its dominance with high barriers to entry, including the default position it’s secured in many browsers and devices, according to the staff. It’s also maintained its monopoly in search “through a series of anticompetitive practices,” according to the report.

The staff wrote that Google has been “blurring the distinction between paid ads and organic results” since capturing its monopoly in general search while stacking its results page with ads.

“As a result of these tactics, Google appears to be siphoning off traffic from the rest of the web, while entities seeking to reach users must pay Google steadily increasing sums for ads,” according to the report. “Numerous market participants analogized Google to a gatekeeper that is extorting users for access to its critical distribution channel, even as its search page shows users less relevant results.”

The report also alleges Google used “anticompetitive contracts” to maintain its monopoly power in search. For example, it would require smartphone manufacturers to pre-install Google apps and give them default status, according to documents reviewed by the subcommittee staff. The authors claim such status harmed competitors in search and app markets. Google may once again be looking to maintain its monopoly as mobile voice becomes more popular for search, the staff alleged, based on interviews with third parties.

“Google’s free products like Search, Maps and Gmail help millions of Americans and we’ve invested billions of dollars in research and development to build and improve them,” a Google spokesperson said in a statement. “We compete fairly in a fast-moving and highly competitive industry. We disagree with today’s reports, which feature outdated and inaccurate allegations from commercial rivals about Search and other services.”

The spokesperson said Google supports Congress working to clarify laws in certain areas mentioned in the report, such as data portability and interoperability.

This article first appeared on CNBC.com. More from CNBC: