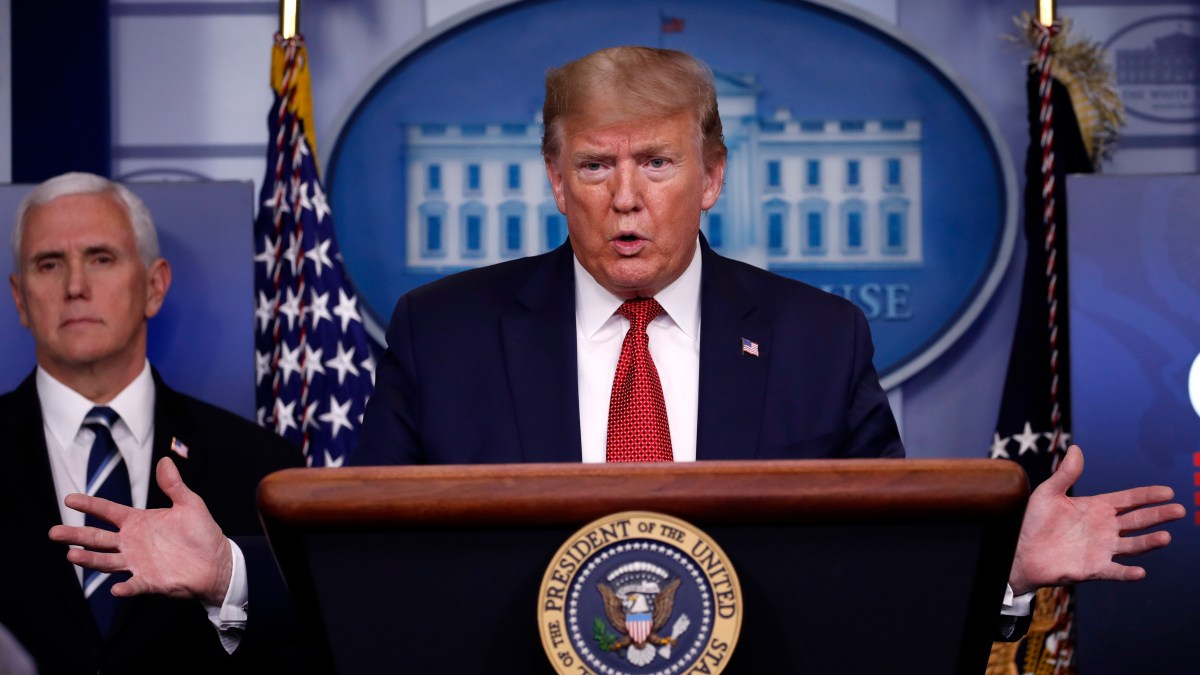 At an April 23 press briefing, President Donald Trump mused about the possibility of using “very powerful light” and injecting disinfectant into the body to kill COVID-19 – a suggestion that, in the case of disinfectant, was roundly criticized by experts as dangerous. A day later, he said he was being “sarcastic.”

There’s no clear indication in his remarks that Trump was joking, either in his initial comment or when he returned to the topic later in the briefing. But we’ll leave it for readers to judge.

At the briefing, William Bryan, who leads the science and technology directorate at the Department of Homeland Security, addressed the media about recent DHS research on how well the coronavirus survives on nonporous surfaces in heat, humidity and sunlight. Bryan said the “virus dies the quickest in the presence of direct sunlight” and also talked about the testing of disinfectants that quickly kill the virus on surfaces.

Trump then spoke about the powers of sunlight and disinfectant, turning at times to address Bryan.

Trump, April 23: A question that probably some of you are thinking of if you’re totally into that world, which I find to be very interesting. So, supposing we hit the body with a tremendous, whether it’s ultraviolet or just very powerful light, and I think you said that hasn’t been checked, but you’re going to test it. And then I said supposing you brought the light inside the body, which you can do either through the skin or in some other way. And I think you said you’re going to test that too. Sounds interesting, right? And then I see the disinfectant, where it knocks it out in a minute, one minute. And is there a way we can do something like that by injection inside or almost a cleaning, because you see it gets in the lungs and it does a tremendous number on the lungs. So it’d be interesting to check that. So that you’re going to have to use medical doctors with, but it sounds interesting to me. So, we’ll see, but the whole concept of the light, the way it kills it in one minute. That’s pretty powerful.

Here, Bryan responded to a reporter’s question about injecting a cleaner into the body, and Trump backtracked on his previous speculation about an “injection”:

ABC News chief White House correspondent Jonathan Karl, April 23: The president mentioned the idea of a cleaner, bleach and isopropyl alcohol emerging. There’s no scenario where that could be injected into a person, is there?

Bryan: No, I’m here to talk about the finds that we had in the study. We don’t do that within that lab at our labs.

Trump: It wouldn’t be through injection. We’re talking about through almost a cleaning, sterilization of an area. Maybe it works, maybe it doesn’t work. But it certainly has a big effect if it’s on a stationary object.

Later in the briefing, Trump suggested applying “light and heat to cure,” and Dr. Deborah Birx, the coordinator of the White House coronavirus task force, responded to Trump’s question by saying she hasn’t heard of heat or light “as a treatment.”

Birx: Not as a treatment. I mean, certainly fever is a good thing. When you have a fever, it helps your body respond. But not as — I’ve not seen heat or light …

Trump: I think it’s a great thing to look at. I mean, you know. Okay?

Doctors and scientists are warning against Mr. Trump’s suggestion that injecting disinfectant into the body may kill the virus. The president made the comments during Thursday’s Coronavirus Task Force briefing at the White House, while also suggesting that ultraviolet light may also provide a cure.

The Day After the Briefing

“President Trump has repeatedly said that Americans should consult with medical doctors regarding coronavirus treatment, a point that he emphasized again during yesterday’s briefing,” McEnany said. “Leave it to the media to irresponsibly take President Trump out of context and run with negative headlines.”

That morning, U.S. Surgeon General Jerome Adams also issued this warning via Twitter, “A reminder to all Americans- PLEASE always talk to your health provider first before administering any treatment/ medication to yourself or a loved one. Your safety is paramount, and doctors and nurses have years of training to recommend what’s safe and effective.”

President Donald Trump on Thursday said he disagrees with Dr. Anthony Fauci over U.S. testing capacity after the NIAID director said in a TIME interview that “we absolutely need to significantly ramp up not only the number of tests, but the capacity to actually perform them.”

Later in the day, Trump claimed his comments the previous day were “sarcastic.”

Reporter, April 24: Can you clarify your comments about injections of disinfectant?

Trump: No, I was asking a question sarcastically to reporters like you, just to see what would happen.

Now, disinfectant, or doing this, maybe on the hands, would work. And I was asking the question of the gentleman who was there yesterday — Bill — because when they say that something will last three or four hours or six hours, but if the sun is out or if they use disinfectant, it goes away in less than a minute. Did you hear about this yesterday? But I was asking a sarcastic — and a very sarcastic question — to the reporters in the room about disinfectant on the inside. But it does kill it and it would kill it on the hands and that would make things much better. That was done in the form of a sarcastic question to the reporters. Okay.

Reporter: But you were asking your medical experts to look into it.

Reporter: Were you being sarcastic with them?

Trump: To look into whether or not sun and disinfectant on the hands, but whether or not sun can help us because, I mean, he came in yesterday and he said they’ve done a big study. This is a study. This isn’t where he hasn’t done it. This is where they’ve come in with a final report that sun has a massive impact, negatively, on this vir– in other words, it does not live well with humidity, and it doesn’t live well with sun — sunlight — heat. It doesn’t live well with heat and sun and disinfectant. And that’s what I brought out. And I thought it was clear. Okay. Anything else?

Although Trump said he told Bryan “to look into whether or not sun and disinfectant on the hands … can help us,” that is not what the video shows. At the briefing, Trump didn’t say anything to Bryan about hands.

Turning to Bryan, Trump said at the briefing, “And then I see the disinfectant, where it knocks it out in a minute, one minute. And is there a way we can do something like that by injection inside or almost a cleaning, because you see it gets in the lungs and it does a tremendous number on the lungs. So it’d be interesting to check that.”

Again, we didn’t detect any sarcasm – and we aren’t alone in that – but since sarcasm is subjective, we’ll leave it to readers to make up their own minds about the president’s intent.

FactCheck.org does not accept advertising. We rely on grants and individual donations from people like you. Please consider a donation. Credit card donations may be made through our “Donate” page. If you prefer to give by check, send to: FactCheck.org, Annenberg Public Policy Center, 202 S. 36th St., Philadelphia, PA 19104.