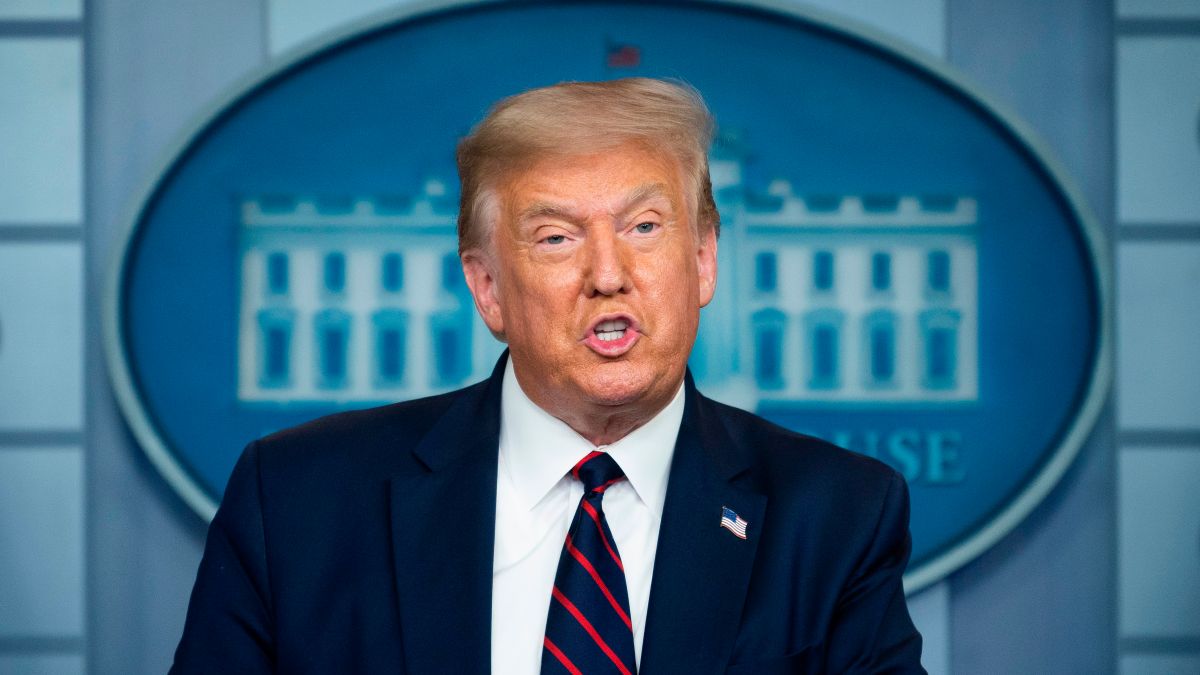 Heads snapped and eyes rolled when President Donald Trump made a case for considering an election postponement in the pandemic. Republican and Democratic lawmakers, who agree on precious little, said forget about it.

Among them, Senate Majority Leader Mitch McConnell agreed Nov. 3 is set in stone. But with Trump previewing his angry discontent if the election is not to his liking, will the foundational rock of the republic hold?

Such questions will shadow the remainder of the campaign now that Trump has explicitly challenged a process that has unfolded on schedule through world wars, the Civil War and every existential calamity in history.

A look at Trump’s statement on the subject, his latest distortions of Democratic rival Joe Biden’s record and more from the past week:

TRUMP: “Must know Election results on the night of the Election, not days, months, or even years later!” — tweet Thursday.

TRUMP: “I want to have the result of the election. I don’t want to be waiting around for weeks and months.” — news conference Thursday.

THE FACTS: He’s demanding something no one can deliver. The president appeared unaware that American democracy can’t be shaped to produce a same-day result to sate his impatience.

There’s certainly no requirement for a winner to be declared election night, and the prospect of having to wait to know who won has not been used as justification to try to delay the vote itself.

State election officials in some battleground states recently warned it may take days to count an expected surge of ballots that people send by mail because they don’t feel safe showing up to the polls. In an election as close as 2016′s, a delayed tally in key states could keep the outcome from being quickly known.

Delayed results are common in a few states where elections are already conducted largely by mail. But a presidential election hasn’t been left in limbo since 2000, when ballot irregularities in Florida led to weeks of chaos and court fights.

TRUMP: “With Universal Mail-In Voting (not Absentee Voting, which is good), 2020 will be the most INACCURATE & FRAUDULENT Election in history. It will be a great embarrassment to the USA. Delay the Election until people can properly, securely and safely vote???” — tweet Thursday.

THE FACTS: Trump has persistently theorized about voter fraud and never supported those theories with facts. He appointed a commission to get to the bottom of voter fraud and it disbanded without making any findings.

Time and again, voter fraud has proved exceedingly rare, and voting without going to polling places has become more common.

Multiple checks, such as signature verification in many states, must happen before a ballot can be counted, and experts say any fraud can be detected.

Five states relied on mail-in ballots even before the coronavirus pandemic raised concerns about voting in person. Those states say they have the necessary safeguards in place to ensure that a hostile foreign actor doesn’t co-opt the vote. More states intend to rely more heavily on mail-in voting for the same reason.

“Trump is simply wrong about mail-in balloting raising a ‘tremendous’ potential for fraud,” Richard L. Hasen, an elections expert at the University of California, Irvine, School of Law, wrote recently. “While certain pockets of the country have seen their share of absentee-ballot scandals, problems are extremely rare in the five states that rely primarily on vote-by-mail, including the heavily Republican state of Utah.”

Indeed, election experts widely say that all forms of voter fraud are rare. The Brennan Center for Justice in 2017 ranked the risk of ballot fraud at an infinitesimal 0.00004% to 0.0009%, based on studies of past elections.

Even so, Trump has sketched wild scenarios, recently imagining “thousands and thousands of people sitting in somebody’s living room, signing ballots all over the place.”

As for the extraordinary step of moving the Nov. 3 election, the chances are almost nil.

The date of the presidential election — the Tuesday after the first Monday in November in every fourth year — is enshrined in federal law and would require an act of Congress to change. Democrats, who control the House, will not support Trump on this. Republicans, who control the Senate, are unlikely to, either.

TRUMP: “Mail-In Voting is an easy way for foreign countries to enter the race.” — tweet Thursday.

THE FACTS: No, it’s one of the most difficult ways for a foreign adversary to meddle in a U.S. election.

Swaying a federal election using absentee ballots would mean paying thousands of U.S. citizens, carefully selected in key cities in battleground states, who are willing to conspire with a foreign government and risk detection and prosecution.

Far easier and cheaper would be a social media campaign seeking to discourage certain groups of people from voting, something the FBI has already warned about. Or launching a sophisticated cyberattack on voter registration data that would eliminate certain voters from the rolls, causing havoc at polling places or election offices as officials look to count ballots from people who are “missing” from their voter databases.

Last month Attorney General Bill Barr raised the possibility that a “foreign country could print up tens of thousands of counterfeit ballots.” He argued they would be hard to detect, but that’s been disputed by election experts.

Absentee ballots are printed on special paper and must be formatted correctly in order to be processed and counted. Ballots are specific to each precinct, often with a long list of local races, and would be easily identified as fraudulent if everything didn’t match precisely.

“This is a complete red herring,” said Wendy Weiser, director of the democracy program at the Brennan Center for Justice. “It’s completely not plausible, and not something that security and election experts are actually worried about.”

TRUMP: “Biden came out against fracking. Well, that means Texas is going to be one of the most unemployed states in our country. That means Oklahoma, North Dakota, New Mexico are going to be a disaster. Ohio, Pennsylvania — disaster. No fracking.” — news conference Thursday.

THE FACTS: No, that’s not Biden’s position at all.

In a March 15 primary debate, Biden misstated his fracking policy to suggest he’d ban it and his campaign quickly corrected the record. Trump continually ignores the correction.

Biden has been otherwise consistent on his middle-of-the-road position, going so far as to tell an anti-fracking activist that he “ought to vote for somebody else” if he wanted an immediate fracking ban. He proposes to deny new fracking permits only on federal lands. Such a limited step cannot spell “disaster” for entire states. By far the most fracking happens on private land.

THE FACTS: We’ve heard this falsehood many times. What’s new is that Trump was informed face to face nearly two weeks ago that Biden does not propose defunding or abolishing police, yet he is still saying it.

Biden actually proposes more money for police departments and he has explicitly rejected the calls of some on the left to defund or abolish departments. He’d spend more to support improvements in police practices.

Two weeks ago, Fox News reporter Chris Wallace confronted Trump on the matter when the president tried to hang a defund-abolish label on Biden. Trump cited a policy documentdrafted by aides to Biden and ex-rival Bernie Sanders. It contains recommendations, not necessarily policies embraced by the candidate. But even that document would not defund or wipe out police departments.

It seeks, for example, “increased funding for officer health and well-being in police departments across the country, including for personal safety equipment and mental health services.”

TRUMP: “What I have done will lead to a 50% REDUCTION in prices, at least, & Big Pharma is not happy about it. No other President would be able to produce what I have.” — tweet Tuesday.

THE FACTS: No massive, across-the-board cuts are in the offing for drug prices.

Efforts announced last month by the president — such as allowing importation of medicines from countries where prices are lower — take time to roll out. It remains to be seen how much they’ll move the needle on prices.

Drug importation, for example, requires regulatory actions to be taken and supply chains to be established, a tall order when the election is just three months away.

Trump has taken actions to reduce patient costs for some drugs, such as insulin, but the steps have been less ambitious than those in a bill from Speaker Nancy Pelosi that the House passed last year. Her bill would authorize Medicare to negotiate prices for expensive medications and use savings from lower drug costs to establish Medicare coverage for dental care, hearing and vision.

Pelosi has challenged Trump to order Republican senators to pass her bill.

White House actions, while not insignificant, don’t amount to the massive changes Trump brags about. One major initiative would give people on Medicare the option of limiting their out-of-pocket costs for insulin to $35 a month starting next year, by picking an “enhanced” prescription drug plan for a slightly higher premium.

TRUMP, on a U.S. intelligence assessment that Russia was paying a bounty to militants in Afghanistan to kill Americans there. “If it reached my desk I would have done something about it.” — interview Tuesday with “Axios on HBO.”

THE FACTS: His claim that the matter didn’t reach him is unconvincing.

The Associated Press reported in June that the assessment was included in at least one of Trump’s written daily intelligence briefings last year. As well, then-national security adviser John Bolton told colleagues he briefed Trump on the intelligence assessment and the subject was the sole purpose of that meeting with the president.

This was according to U.S. officials with direct knowledge of the intelligence who spoke on condition of anonymity because they were not authorized to discuss the highly sensitive information publicly.

Trump said this past week he did not raise the matter in recent phone calls with Russian President Vladimir Putin. Secretary of State Mike Pompeo would not tell senators in testimony whether he has brought it up with his Russian counterpart. He said he discusses with the Russians all threats that they pose to Americans and U.S. interests.

White House officials have argued that Trump wasn’t briefed on the suspected bounties because the assessment is not conclusive. However presidents are commonly informed of the most consequential intelligence even if the findings are not complete, so they can make decisions about potential or emerging threats.