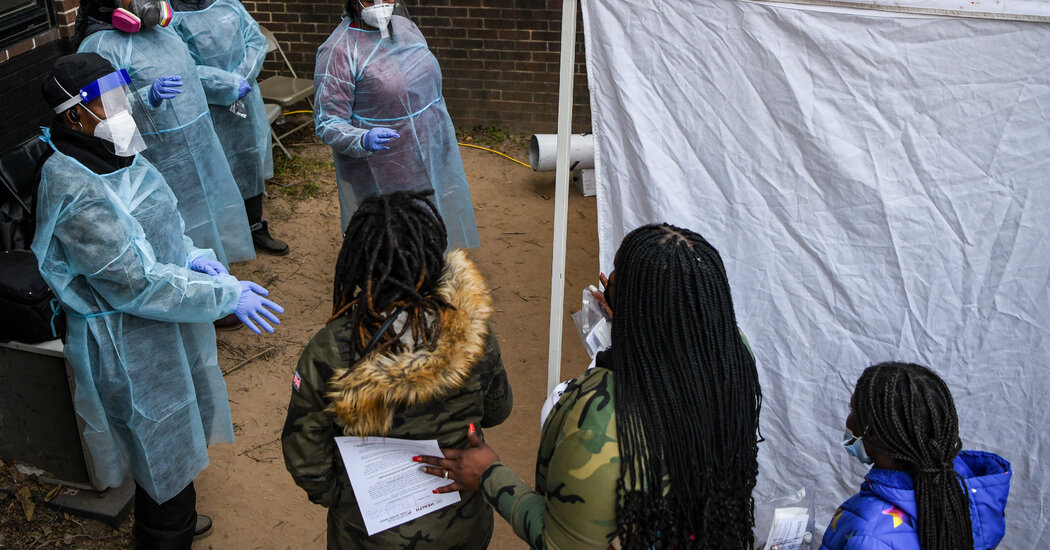 Dr. Rochelle P. Walensky and Dr. Anthony S. Fauci cautioned that hospitalizations and deaths could be lagging behind case counts.

WASHINGTON — Top federal health officials emphasized on Wednesday that data on skyrocketing coronavirus cases in the United States and from other countries reinforced early signs that the highly contagious Omicron variant was milder and less lethal than previous variants, even as it threatened to overwhelm health systems already on the brink from earlier surges.

Their comments at a White House news conference reflected a growing urgency in the administration to reassure Americans anxious about another winter of isolation as it races to respond to worsening outbreaks across the country.

Dr. Rochelle P. Walensky, director of the Centers for Disease Control and Prevention, said that as cases increased by about 60 percent over the past week, to around 240,000 each day, hospital admissions and deaths had remained “comparatively low,” hinting at a less deadly wave of the virus.

“This could be due to the fact that hospitalizations tend to lag behind cases by about two weeks,” she said, “but may also be due to early indications that we’ve seen from other countries like South Africa and United Kingdom of milder disease from Omicron, especially among the vaccinated and the boosted.”

Dr. Anthony S. Fauci, President Biden’s chief medical adviser, said at the same news conference that “the pattern and disparity between cases and hospitalization strongly suggest that there will be a lower hospitalization-to-case ratio when the situation becomes more clear.”

One report this week from a hospital in South Africa, Dr. Fauci said, showed significantly fewer patients needing supplemental oxygen, fewer intensive-care admissions and fewer deaths. A study in the United Kingdom that examined patients through Dec. 19 showed a much lower risk of hospital admission with Omicron compared with those infected with the Delta variant, data that a separate Scottish study backed up, he said.

The more hopeful data on Omicron’s spread has been tempered by a crush of virus cases in hospitals around the country, where burned-out health care workers have clamored for help as mostly unvaccinated patients overwhelm emergency rooms and intensive-care units.

Jeffrey D. Zients, the White House’s Covid-19 response coordinator, said that 13,000 National Guard members were in 48 states helping with vaccinations, testing and clinical work. The federal government has sent ambulances to states in need, he added, including to badly hit New York, where dozens of Federal Emergency Management Agency employees were aiding the effort. Reinforcements had arrived in or were headed to Arizona, Wisconsin and Indiana, Mr. Zients said.

More federally run test sites would open in the coming days, Mr. Zients said, including in Philadelphia and Washington, D.C. Those commitments were still unlikely to dull criticism from public health experts that the Biden administration had neglected the nation’s testing stockpile ahead of Omicron’s arrival in the United States. Demand for tests has exploded this month, causing manufacturers to scramble to produce and distribute more of them.

The Food and Drug Administration on Wednesday authorized an at-home test made by Siemens Healthineers, through a new accelerated review program, the Department of Health and Human Services said. And the Defense Department awarded a $136.7 million contract to MilliporeSigma, which manufactures a key ingredient in rapid tests. The contract allows a Wisconsin factory “to support more than 83.3 million tests per month,” the department said.

Mr. Zients said a contract that would allow the government to deliver 500 million rapid tests for free would be finalized by the end of next week. Deliveries from manufacturers were still set to begin in January.

Dr. Fauci said that the levels of mild infection suggested that the United States would have to transition to living comfortably with some amount of controlled spread of the virus. “This is a highly, highly transmissible virus. We know that from the numbers we’re seeing,” he said. “Each individual person throughout this country is now seeing around them the high degree of transmissibility.”

He said that while it was safe for vaccinated people to gather in small groups with family and friends over New Year’s weekend, Americans should be cautious about staging traditional indoor parties.

“If your plans are to go to a 40- or 50-person New Year’s Eve party with all the bells and whistles and everybody hugging and kissing and wishing each other a happy New Year, I would strongly recommend that this year we do not do that,” he said.

But he said that public health policy would gradually have to reflect more social and financial concerns.

“It becomes much more relevant as to what the seriousness of the impact on society is. We’re never going to stop counting tests,” he said. “But we’re looking forward, as I think everyone feels is appropriate, that, ultimately, when we’re going to have to, quote, ‘live’ with something that will not be eradicated and very likely would not be eliminated, but can actually be at such a lower level of control, namely a control that does not disrupt society, does not disrupt the economy.”

The C.D.C. on Monday nodded to that idea when it shortened by half the recommended isolation period for many infected Americans, even if they have not been tested, a move criticized by some scientists and public health experts as premature. Dr. Walensky said in a Tuesday interview with The Times that rapid tests were not effective enough at diagnosing infectiousness in people.

“You don’t necessarily do a test if you don’t know what you’re going to do with the result,” she said. “The anticipated number of cases that we were seeing required us to take action at this moment.”

Dr. Walensky on Wednesday continued to defend the new recommendations, saying at the White House news conference that “the vast majority” of transmission of the virus was occurring two days before symptoms and two to three days afterward. “Any of that lingering small amount of transmission afterwards would be prevented by masking,” she said. “We are standing on the shoulders of two years of science, two years of understanding transmissibility.”