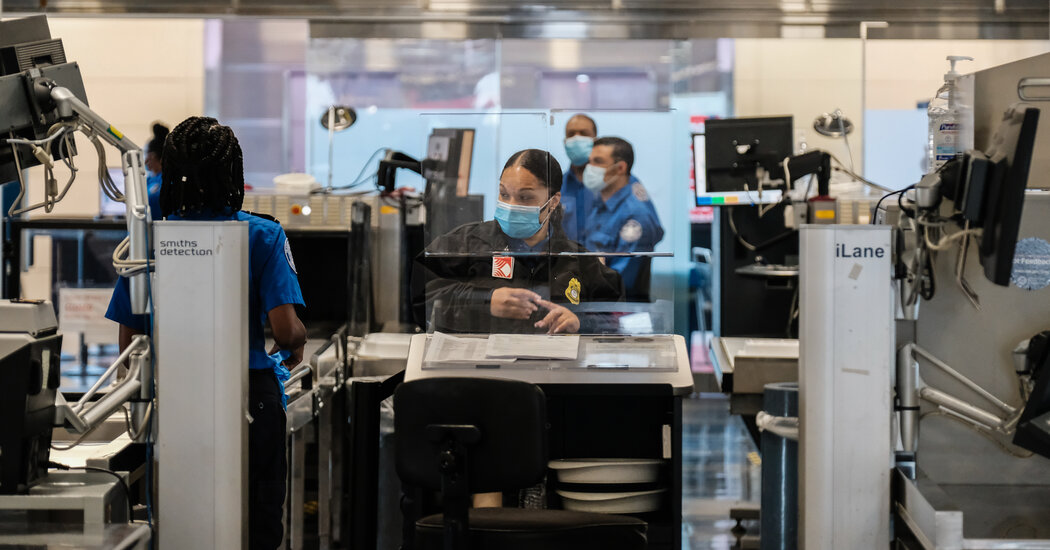 Despite a drastic decrease in airplane passengers because of the coronavirus pandemic, the rate of customers illegally transporting firearms in carry-on bags was three times as high in July as it was during the same month last year, the Transportation Security Administration said on Monday.

Last month, the agency found 15.3 guns — transported illegally in carry-on bags — per million passengers. In July 2019, it found 5.1 guns per million people screened, the T.S.A. said. With the spread of the coronavirus, the agency noted 75 percent fewer passengers compared with last year, making the rate “particularly alarming,” the agency said in a statement.

“Even more concerning is that 80 percent of the firearms coming into the checkpoint are loaded, and it’s just an accident waiting to happen,” David Pekoske, the agency’s administrator, said. “Travelers need to know that if they bring a gun to the security checkpoint, regardless of whether it is in a handbag, knapsack, roller-bag or strapped to their belt, it will be an inconvenient and expensive mistake on their part.”

The increase in the rate may reflect the fact that there has generally been an increase in gun sales since the coronavirus crisis began.

Increased gun sales means more weapons in circulation across the country, said Robert Spitzer, a professor of political science at the State University of New York College at Cortland and the author of five books on gun policy. He attributed the increase in sales to rising fear among Americans because of virus anxiety or to people’s desires to make a political statement.

“While most Americans don’t seek security by buying guns, some do, and they may well be more disposed therefore to carry them around,” he said. “Some of that carrying extends to airports where clearly some people don’t think about the fact that they shouldn’t be carrying.”

It is legal for passengers to transport firearms in checked luggage, according to the agency, but they can’t be loaded and must be stored in a locked, hard case and kept separate from ammunition.

When a firearm is detected at a security checkpoint, local law enforcement officers will take the passenger out of the security line, Mark Howell, a spokesman for the agency, said. Depending on the state’s gun laws, the official decides whether to cite or to arrest the passenger. A civil citation from the T.S.A. will arrive later in the mail.

Mr. Howell added: “99.9 percent of the time the excuse we get is, ‘Oops, I forgot that was in my bag,’ or ‘Somebody packed that for me.’ People are just not paying attention to what they have with them.”

That could be a costly mistake. People caught improperly traveling with a firearm could be fined starting at $2,050 for an unloaded firearm and $4,100 for a loaded forearm, or one with accessible ammunition. The fine can exceed $10,000 depending on factors including whether the person is a repeat offender.

The passenger is also referred to the authorities for a criminal investigation, according to the agency, and any existing T.S.A. PreCheck status is temporarily revoked. In addition to fines, the passenger might have to pay for court representation and, in some cases, a replacement firearm, Mr. Howell said, as well as lose money for the missed flight.

In total, 4,432 firearms were detected in 2019 by the T.S.A. at checkpoints, the agency said, a 5 percent increase from the year before. Eighty-seven percent of those forearms were loaded.

At airports in Atlanta, Denver and Nashville, there were more guns found this July than last, Mr. Howell said.

Experts have reported an increase in gun sales since the start of the coronavirus crisis. According to the F.B.I., there were 3.6 million federal firearm background checks last month. In July 2019, there were two million background checks, and in 2018 there were 1.8 million. These numbers are often used as a proxy for gun sales, but they are not exact figures.

In March, Americans bought two million guns, according to a New York Times analysis, making it the second highest month for firearm purchases since January 2013, just after the shooting at Sandy Hook Elementary School in Connecticut.

Mr. Spitzer, the political science professor, noted that the pandemic might embolden some people to think that they could get away with carrying guns through airports because of fewer security or airport employees working. But over all, he said, the number of guns detected at airports is relatively small.

Phillip Levine, a professor of economics at Wellesley College in Massachusetts who wrote about the increase of gun sales this spring, said that the coronavirus crisis and the upcoming election could lead to an extended surge in gun purchases, estimating the number could reach 40 million this year.

“During times of uncertainty people feel more comfortable with guns and that certainly seems to be true during our pandemic,” he said.