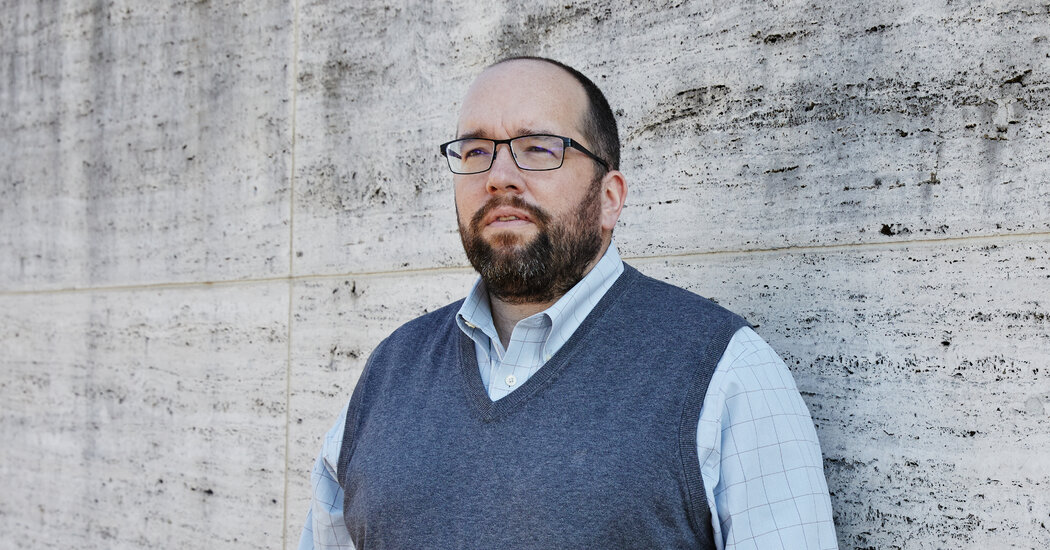 Daniel Darling was at the center of a media storm over the summer. He hopes to lead a more civil discussion at Southwestern Baptist Theological Seminary in Texas.

A year ago, Daniel Darling was following news reports about the development of the coronavirus vaccines with eager anticipation. His family had all had Covid-19 themselves, and his children had lost their beloved piano teacher, an otherwise healthy 50-year-old woman, to the virus. The pandemic was personal.

Eventually, vaccination became personal for Mr. Darling, too. In August, endorsing the shots from an evangelical perspective cost him his job as spokesman for the National Religious Broadcasters, a largely conservative group of some 1,000 members employed in Christian media. The news exploded not just in evangelical circles but also into the mainstream media, giving Mr. Darling a turn in the polarized news cycle that he had previously observed from the sideline.

“God has put me at the center of the storm,” Mr. Darling recalled thinking to himself in the moment. He was determined not to respond with vitriol. “Can I demonstrate forgiveness?” he wondered. “Can I make an appeal to Christian unity?”

Now, Mr. Darling has an answer, or at least the beginning of one. He has been named the director of the Land Center for Cultural Engagement at Southwestern Baptist Theological Seminary in Fort Worth, an appointment that was announced on Monday. The center was established in 2007 but has been inactive since 2019. The Southern Baptist seminary hopes that under Mr. Darling the center will help shape evangelical conversations on a wide spectrum of political and cultural issues, from bedrock evangelical issues like abortion and religious liberty, to technology, race and immigration.

Almost as important to Mr. Darling is the tone in which he approaches those discussions. “I think you can have both courage and civility at the same time,” he said. “This incessant need to fight for and tear people down for sport is really unhealthy.”

The vaccine debacle caught Mr. Darling off guard. In his circles of conservatives at work and in the Baptist church in a Nashville suburb where he serves as an elder, the Covid vaccines — developed during the presidency of Donald J. Trump — were mostly uncontroversial at first.

High-profile members of his lobbying group, including the pastor Robert Jeffress and the evangelist Franklin Graham, had endorsed the vaccines publicly. In the spring, Mr. Darling’s boss even sent an email to the organization’s supporters celebrating the vaccines as “stunningly effective,” as part of a message assuring them that the group’s annual conference in Grapevine, Texas, would be “a safe and rewarding experience” for its thousands of attendees.

By then, however, the topic of vaccination was becoming more fraught in many conservative circles, including on talk radio, a mainstay of his employer’s member base.

On Aug. 1, Mr. Darling wrote a column for USA Today, where he is a contributor, about his own decision to get vaccinated, even as he acknowledged and even validated widespread wariness of the shots. “There are not many things in the world today that are worthy of our trust, but I sincerely believe the Covid-19 vaccine is one of them,” he wrote. “As a Christian and an American, I was proud to get it.”

At work, the column ruffled some feathers. In a group chat, a colleague wondered why the nonprofit organization’s spokesman was endorsing vaccination. Troy Miller, the group’s chief executive, responded in what Mr. Darling perceived to be a casual way, writing that “from here out N.R.B. stays neutral.”

On Aug. 18, Mr. Darling appeared on MSNBC’s “Morning Joe” to discuss the column. By the end of the month, he was out of a job. Mr. Miller — a fellow elder at Mr. Darling’s church — has said Mr. Darling was offered another position and decided to leave instead. Mr. Darling calls it a firing, and said he would have had to sign a statement admitting to willful insubordination in exchange for the lesser role. Mr. Miller declined to answer questions on Monday morning.

The news divided evangelicals along lines that were by then predictable. Mr. Darling’s fellow institutionalists, most of whom had endorsed the vaccines themselves, rushed to his defense. Populists and ultraconservatives called him a “pawn” of the “Christians in Name Only” who wanted to take down his employer, and accused him of pushing “leftist causes.”

The F.D.A. has authorized booster shots for millions of recipients of the Pfizer-BioNTech, Moderna and Johnson & Johnson vaccines. Pfizer and Moderna recipients who are eligible for a booster include people 65 and older, and younger adults at high risk of severe Covid-19 because of medical conditions or where they work. Eligible Pfizer and Moderna recipients can get a booster at least six months after their second dose. All Johnson & Johnson recipients will be eligible for a second shot at least two months after the first.

Yes. The F.D.A. has updated its authorizations to allow medical providers to boost people with a different vaccine than the one they initially received, a strategy known as “mix and match.” Whether you received Moderna, Johnson & Johnson or Pfizer-BioNTech, you may receive a booster of any other vaccine. Regulators have not recommended any one vaccine over another as a booster. They have also remained silent on whether it is preferable to stick with the same vaccine when possible.

The dismissal happened as many secular employers across the country were enacting vaccine requirements that would eventually lead to firing workers who refused to get vaccinated. Firings over pro-vaccine advocacy are rarer. In July, the state of Tennessee fired its top vaccine official, which she has described as backlash to her push for teenagers in the state to get vaccinated.

Being fired from his job at an evangelical organization was an especially awkward position for someone who thinks of himself as a bridge-builder. Mr. Darling, who has led communications operations for several major evangelical organizations, can seem almost allergic to expressing a negative opinion. He once wrote a book encouraging Christians to express themselves more civilly online.

In discussing his own dismissal, he prefers to emphasize the overwhelming support from his church after his sudden unemployment, and his commitment to reconciling personally with Mr. Miller. “I still have great faith in the evangelical movement,” he said.

Mr. Darling is arriving at the Southern Baptist seminary at a particularly fraught moment for the nation’s largest Protestant denomination, whose membership rolls have been declining for years. An energetic right flank narrowly missed placing its candidate as president at the group’s annual convention this summer, and for the last several years the denomination has been roiled with contentious internal debates over how to respond to sexual abuse cases in its churches and seminaries.

“There will be people who will criticize Dan and label him a fundamentalist,” said Adam Greenway, the seminary’s president since 2019. “And there will be people who call Dan woke and liberal because he doesn’t see the vaccine as the mark of the beast. If you’re taking a little bit of shrapnel from the fringe left and the far right, that’s not a bad thing.”