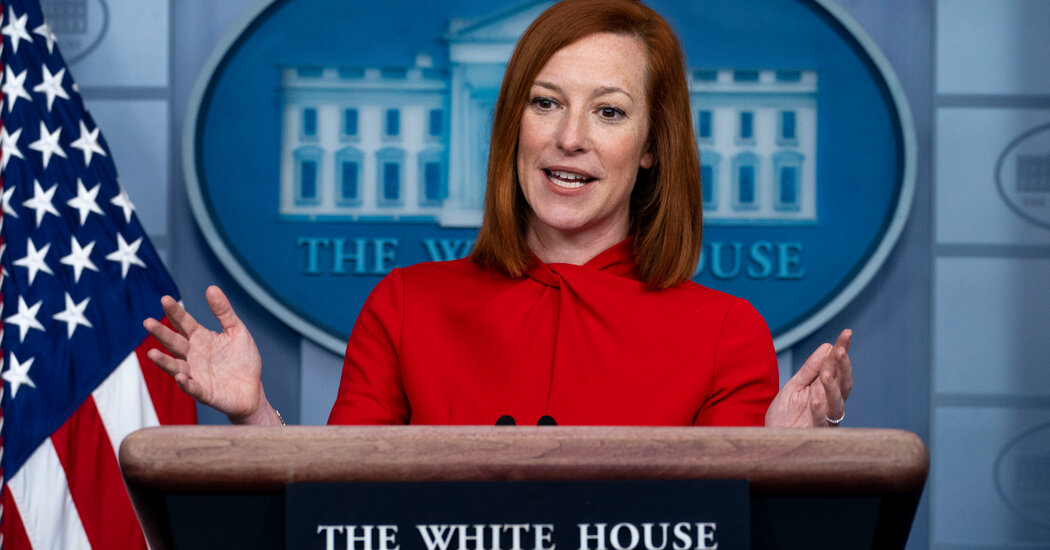 The episode highlighted how murky new guidelines toward past use are, particularly for a White House that has pledged to embrace progressive positions.

WASHINGTON — In February, the Biden administration signaled that past marijuana use would not necessarily disqualify a person from employment by relaxing longstanding policies that have barred some past users of the drug from working in the White House.

The change was seen as a way to open the door for younger talent from parts of the country where marijuana has been legalized, but it took only a few weeks for the new guidelines to be publicly tested.

On Friday, responding to a news report in The Daily Beast that said dozens of young staff members had been pushed to resign or had been reassigned to remote work based on their past marijuana use, Jen Psaki, the White House press secretary, confirmed that some employees had been sidelined but said that it applied to fewer people.

“The bottom line is this,” Ms. Psaki wrote on Twitter, “of the hundreds of people hired, only five people who had started working at the White House are no longer employed as a result of this policy.”

The episode highlighted how murky the new guidelines are, particularly for a White House that has pledged to embrace progressive positions. A number of officials who have disclosed past marijuana use but are still permitted to work for the Biden administration have been asked to sign a pledge not to use marijuana while working for the government, and they must also submit to random drug testing, according to officials. Not everyone who disclosed past marijuana use during an extensive background check has been given the chance to stay on.

Aides to President Biden defended the policy, noting that previous administrations enforced stringent measures, including President Barack Obama, who engaged in recreational drug use as a youth. The Obama administration required past use to have been six months old or longer or only two to three uses in the past year.

Still, critics saw a culture clash between a class of young new hires — who may have been under the impression that past marijuana use would not be a disqualifying concern — and Mr. Biden’s historically more moderate stance toward the drug. Marijuana use and possession is still a federal crime, despite fast-growing public support to legalize the drug.

“There are competing interests within administration and policies that have been on the books for a very long time that are now coming in contact with new ideas and new people that want to change those policies,” Udi Ofer, the director of the justice division at the American Civil Liberties Union. “Today we learned it can still be a disqualifier.”

The five officials Ms. Psaki mentioned on Friday had been directed to resign in part because of past marijuana use, according to a person familiar with the matter but who was not authorized to speak publicly. Several in that group also had other disqualifying factors that surfaced when determining their eligibility to receive jobs in the administration, that person said.

About a dozen administration officials have been directed to work remotely until they have been cleared to meet a new standard of past marijuana use set by White House officials overseeing personnel security. Officials did not detail that timeline on Friday.

The rules were released amid guidance from the United States Office of Personnel Management that could affect how people in agencies across the federal government qualify for employment.

“It would be inconsistent with suitability regulations to implement a policy of finding an individual unfit or unsuitable for federal service solely on the basis of recency of marijuana use,” wrote Kathleen McGettigan, the agency’s acting director. “Past marijuana use, including recently discontinued marijuana use, should be viewed differently from ongoing marijuana use.”

Drug policy experts raised questions about whether the White House policy reflected that the Biden administration would be slower to decriminalize marijuana and expunge nonviolent marijuana-related convictions, as Mr. Biden had promised on the campaign trail.

Some also worried that other businesses would follow the White House’s lead in filtering out employees based on past marijuana use, even as some police departments across the country loosen their policies for new recruits.

“It’s hard enough to get a job. This is just another thing,” said Maritza Perez, the director of the office of national affairs for the Drug Policy Alliance. “You would think that we were at a different place now.”

Ms. Perez pointed out that Vice President Kamala Harris, a former Democratic senator of California, won the support of those in the marijuana advocacy community when she helped sponsor sweeping legislation that would decriminalize the drug and expunge nonviolent related convictions.

“I do think this undercuts that previous stance,” Ms. Perez said.

While Mr. Biden was slow to support the decriminalization of marijuana, Ms. Harris, a former prosecutor, signaled support for legalization multiple times during her campaign.

In what was supposed to be a lighthearted moment that soon turned viral, she even acknowledged on “The Breakfast Club,” a wide-ranging radio show that focuses on hip-hop and Black culture, that she “did inhale” marijuana in college “a long time ago.”

Time has passed since those statements and the actions against young administration officials has proponents of criminal justice and marijuana legalization curious where the White House stands.

“There is confusion across the country because of out-of-date laws and the fact that the American public is not waiting for the federal government to get its act together,” said Representative Earl Blumenauer, Democrat of Oregon.

Gil Kerlikowske, the director of the Office of National Drug Control Policy during the Obama administration, said that even then, the White House was worried about any perceived leniency toward drug crimes.

After telling The Wall Street Journal in 2009 that the administration wanted to end the idea of a “war on drugs,” Mr. Kerlikowske said he was rewarded with an angry call.

“The next day a young person from the White House communications office said, ‘Can you really say that? Aren’t they going to think we’re soft on drugs?” Mr. Kerlikowske said. He told the White House staff member that even his peer police chiefs were moving on from such messaging. “The drug issues are always very sensitive.”