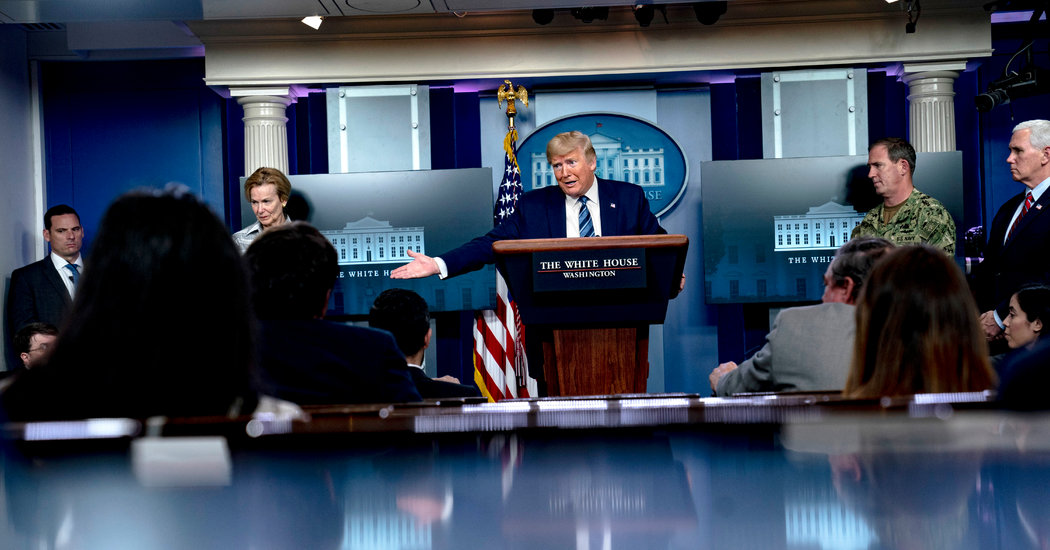 Donald Trump declared himself a “wartime president” just three weeks ago. On Twitter, he proclaimed “WE WILL WIN THIS WAR.” At last, he seemed to grasp the gravity of the Covid-19 crisis facing the world. Bluster aside, Mr. Trump is correct: This is war, the most consequential since World War II, and he is in charge.

Unfortunately, few of his actions display the leadership we need from a wartime commander in chief who is confronting a viral version of World War III.

The United States military develops detailed war plans for combat scenarios and exercises regularly to prepare for contingencies. The Defense Department gathers intelligence, scans the globe for impending threats, pre-positions forces and equipment, stockpiles supplies and trains its forces. Maintaining readiness is the military’s most prized prerequisite for battlefield success.

In the case of coronavirus, the Trump administration shelved the war plan, or pandemic “playbook,” prepared by the Obama administration. It disbanded the National Security Council office established to provide early warning and ensure preparedness, and disregarded the intelligence community’s warnings that a global pandemic was likely.

Meanwhile, it repeatedly sought to cut funds for the Centers for Disease Control and Prevention, the National Institutes of Health and key parts of the Department of Health and Human Services, while letting the government’s stockpile of ventilators deteriorate.

Worse, the Trump team wasted two critical months, as the virus swept to our shores, before starting to send forces into battle. Its failure to act quickly, upon receiving warning in early January of a novel coronavirus, to create and distribute enough functional tests to track the disease, or to help states add hospital beds, procure critical equipment and recruit health care workers, ensured we started the fight trapped behind enemy lines.

In wartime, we expect our leaders to provide truthful accounts of the enemy’s treachery and a sober rendering of the costs of battle, as Franklin Roosevelt did after Pearl Harbor. By contrast, President Trump spent weeks playing down Covid-19, comparing it to the flu, and in January claimed: “We have it under control. It’s going to be just fine.” That caused many Americans to discount the threat and resist essential social-distancing measures.

Wartime presidents take command. They don’t shirk duty or deflect ownership. Yet Mr. Trump takes no “responsibility at all” for his missteps. He falsely blames his predecessor, impeachment, governors, health care workers and China for his failure to engage the battle early and effectively.

Typically, the commander in chief places a senior general in charge, an Eisenhower or Patton, and gets out of the way. Mr. Trump hogs the spotlight, misleads the public daily and contradicts his public health experts. He has created confusion on the battlefield as to whether Vice President Mike Pence, Dr. Deborah Birx, Jared Kushner or Peter Navarro is his top commander.

Most shockingly, to condition the electorate for unfathomable, if unnecessary losses, Mr. Trump proclaimed that his “goal” (a “very good job”) is to limit America’s human toll to 100,000 to 240,000 dead — more than the combined U.S. battlefield deaths of every war since 1945.

When facing a mortal enemy, above all, we need our commander in chief to unite the nation in collective purpose and shared sacrifice. To defeat the common adversary, we must set aside our differences. President Trump prefers to attack governors, reporters and anyone he deems insufficiently “appreciative” of his anemic efforts.

Rather than order the whole nation to stay at home, appoint a senior federal supply czar, fully invoke the Defense Production Act to recruit medical personnel and procure and distribute ventilators and masks to where they are needed most, Mr. Trump has created a Hobbesian jungle where it’s every man for himself. States are forced to compete for desperately needed supplies at jacked-up prices.

Deeming the federal government merely a “backup” to the states, Mr. Trump has created what Gov. Jay Inslee of Washington called a “ludicrous” situation: “Can you imagine if Franklin Delano Roosevelt said, ‘I’ll be right behind you, Connecticut. Good luck building those battleships.’” By pitting states against one another, Mr. Trump pours salt in our political divisions and cripples our ability to defeat the virus.

Finally, when at war, America traditionally relies on allied support. In turn, we commit our forces to liberate occupied territory. In the Covid-19 battle, Mr. Trump has undermined our allies — trying to buy up their technology and hijack their supply chains. He should lead a coordinated international response that prevents the virus from returning once it has been suppressed and prompts a global economic recovery.

Instead, the administration has paralyzed the United Nations and Group of 7 with its shameful insistence on branding Covid the “Wuhan virus,” abdicated leadership internationally and largely ignored the world’s poorest nations in their fight against the pandemic.

Many thousands more Americans will die unnecessarily because of the incompetence and perfidy of our “wartime president.” It’s in our common interest that Mr. Trump stop trash-talking and start leading with the decency and resolve that we deserve. But let’s not kid ourselves: Until America changes command, we are condemned to fight with the leader we have.