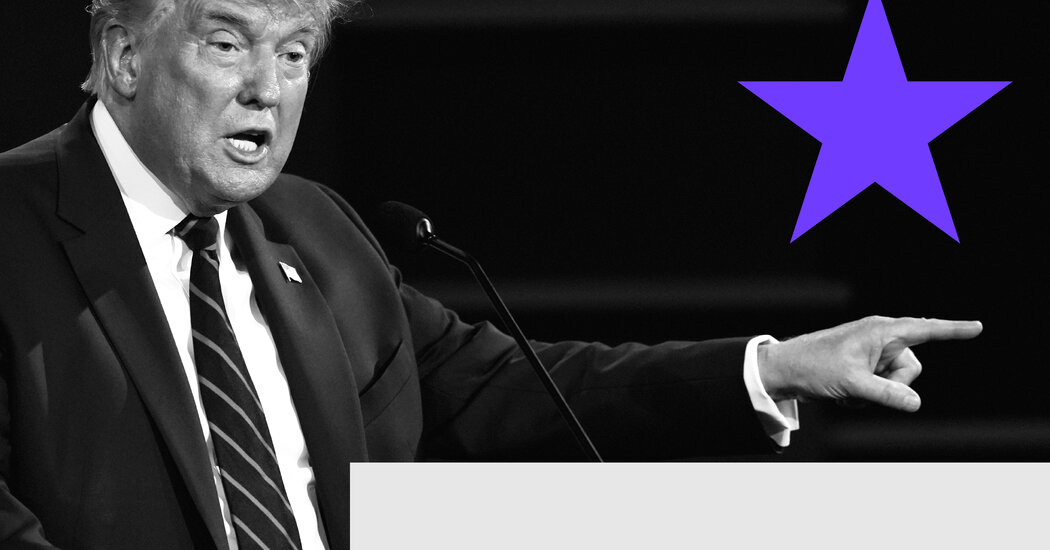 Little more than 12 hours after the conclusion of the most chaotic, counterproductive and outright offensive American presidential debate in my lifetime, the Commission on Presidential Debates promised unspecified format changes in the two remaining faceoffs between Donald Trump and Joe Biden so that the events would be more orderly, which is to say watchable at all.

Hooray for the commission, but give me a break. If its members fully absorbed President Trump’s 90-minute snit on Tuesday night in Cleveland, then they know that they can show him the way toward decency and give him a few forceful shoves in its direction, but they can never get him there. That’s the lesson of his entire presidency. The debate just put a gargantuan exclamation point on it.

A destructive, dangerous exclamation point, too, which is why the commission isn’t going far enough. It should cancel the coming Trump-Biden debates altogether.

Let Vice President Mike Pence and Senator Kamala Harris have their matchup next Wednesday night, then let Americans move on. They have all the information they need to decide whether they want another four years of Trump. Giving him more time in front of a national television audience isn’t a route to clarity. It’s an expressway to autocracy, because his performance on Tuesday night proved that he will use these showcases to subvert democracy.

On Wednesday morning I published a column, written fast on the heels of the debate, that exhorted Biden to refuse to participate in a second or third one. But the more I thought about that, the more I realized that he shouldn’t bear that onus and open himself to baseless charges by Trump and his minions that he’s running scared. The architects and arbiters of these events should take on that responsibility.

They have ample cause. In fact they have an open-and-shut case.

Did you tune into the debate? Then you saw that Trump acted like a spoiled child, a machine gun of interruptions, a gusher of insults. His misbehavior rendered any illuminating exchange of ideas or contest of opinions impossible. But that’s not the commission’s real cause. That’s not its best case.

This is: Trump’s core strategy in the debate — reflective of his core strategy overall — was to make voters so disgusted that many would turn away from the election and so distrustful that many would follow his lead should he reject the official results. He’s maneuvering himself into position to steal this election. On Tuesday night he turned the debate commission and every television network and internet site that aired or streamed the event into his accomplices.

As my Times colleague David Sanger wrote in an analysis with the on-the-money headline “Tuesday’s Debate Made Clear the Gravest Threat to the Election: the President Himself,” every inflated or baseless charge about voting that Trump made during the debate had already been “delivered in recent weeks, in tweets and rallies with his faithful. But he had never before put it all together in front of such a large audience.”

He said the election was “rigged.” He used the words “fraud” and “fraudulent.” He insisted that the Democrats would “cheat.” He cast mail-in ballots, a crucial alternative in the midst of a pandemic, as an enormous scam. He raised the specter of “tens of thousands of ballots being manipulated.”

He said that he was “counting on” Supreme Court justices — including, if all goes according to his and Senate Majority Leader Mitch McConnell’s plans, three whom he appointed — “to look at the ballots.” He ducked a question from the moderator, Chris Wallace, about whether he would pledge not to declare victory “until the election has been independently certified.” He gave every indication that he would challenge any outcome not to his liking.

He also repeated previous appeals to his supporters to go to the polls to watch for suspicious conduct. That scenario smacks of voter intimidation. It’s also a recipe for violence, especially when you add the ingredient of the Proud Boys, whom he told to “stand by.”

All of that was on top of a florid show of flamboyant nastiness that was equally tactical — and plenty corrosive on its own. Trump figures that if he demoralizes the electorate, that redounds to his benefit, and he’s right. That has long been his way: to treat Americans to a spectacle so coarse and dark that its ugliness befogs everything and befouls everyone. He looks horrible, but nobody else looks much better.

But while his posture toward Biden was grotesque, it was also an exaggeration of familiar political feuding. His attack on American democracy, on the other hand, was inexcusable and impermissible. The commission — a bipartisan nonprofit group that has run presidential debates since the ’80s — should respond accordingly.

But that sort of hesitancy prevented officials in President Barack Obama’s administration from publicizing what they knew about Russian interference in the 2016 election until it was over. That kind of reluctance discouraged journalists from boycotting White House news briefings when they should have, toward the very start of the Trump administration.

Trump continues to take a wrecking ball to vital American institutions and sacred American traditions. He did it on Tuesday night to the process by which we choose the person who will shape the country’s future and lead us into it. To give him a stage that grand again is to commit civic suicide.