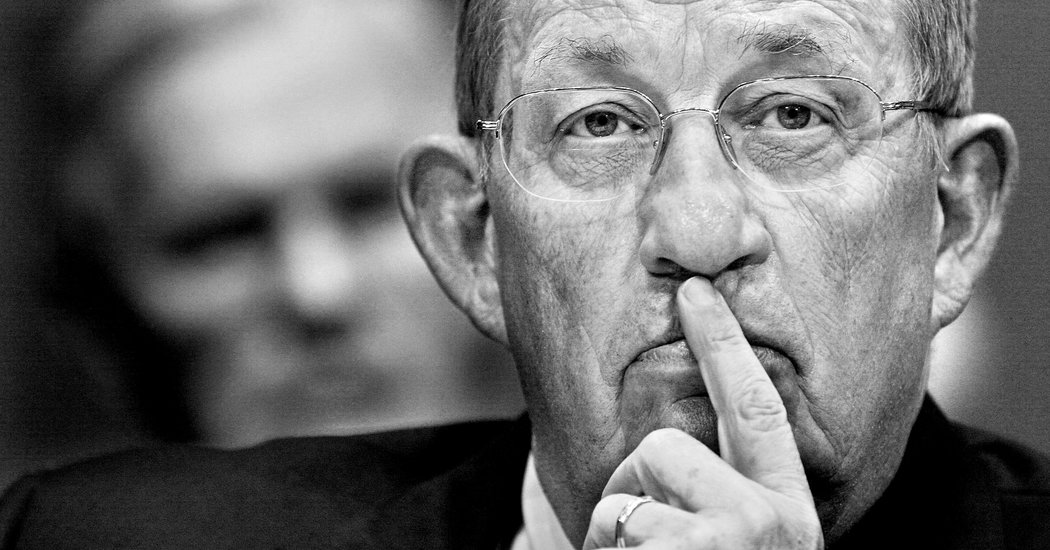 If you want to know why young people increasingly despair that the rest of us will leave them without a habitable world, consider the case of Lee Raymond.

At a time when millions are losing their jobs, JP Morgan Chase said this month that 81-year-old Mr. Raymond would be up for re-election to his post as the bank’s lead independent director when its shareholders meet in May, despite the fact that he led a company that has helped cause chaos on a scale hard to even imagine.

The bank said that Mr. Raymond had offered not to stand for re-election, given his age, but that the bank’s board wanted him to retain his seat because “his broad experience” both within and outside JP Morgan was “in the best interests” of shareholders.

And his previous outside experience?

He was the chairman and C.E.O. of the oil giant Exxon from 1993 to 1999 and of Exxon Mobil from 1999 to 2005, years when it helped pioneer corporate efforts to create doubt about climate change. Even though, according to internal company memos, the company’s own scientists knew that global warming was very real and very dangerous, and even though Exxon started doing things like safeguarding its infrastructure projects against the sea-level rise they knew was coming, it didn’t tell the rest of us.

Instead, with its peer companies, Exxon helped build the expensive architecture of deceit and disinformation that brought us 30 years of phony debate about whether climate change even existed.

Exxon Mobil has said Mr. Raymond’s statements on the climate have been largely misunderstood. But he seemed quite clear about the subject in a 1997 speech he gave to leaders at the World Petroleum Congress in Beijing shortly before the Kyoto climate talks. His remarks were summed up by Bloomberg News this way: “First, the world isn’t warming. Second, even if it were, oil and gas wouldn’t be the cause. Third, no one can predict the likely future temperature rise.”

Indeed, he told the conference, the earth had been cooling in recent years. Even if the scientists were right about the greenhouse effect, he continued, “it is highly unlikely that the temperature in the middle of the next century will be significantly affected whether policies are enacted now or 20 years from now.”

Which helps explain why we’ve just lived through the five warmest years on record, and 2020 seems certain to join the list.

That epic misjudgment — and his company’s efforts while he was at the helm to sow doubt and mislead about global warming — didn’t cost him his seat on the bank’s board, which he has held for 33 years. Instead he fit right in — as the annual “Banking on Climate Change” reports from the Rainforest Action Network make clear. JP Morgan has become the world’s biggest lender to the oil and gas industry, providing over a quarter-trillion dollars in the years since the Paris climate accords were signed.

Normally a shareholder vote would be pro forma. The last time around, Mr. Raymond got nearly 94 percent support. But maybe not this year.

In recent months, Wall Street seemed to be reaching a tipping point on climate change. One big institution after another began issuing position papers outlining their concern. Laurence Fink, founder and chief executive of BlackRock, the world’s biggest asset manager, wrote in his annual letter to C.E.O.s that “climate change is almost invariably the top issue that clients around the world raise” with his staff. The company promised to use its outsize shareholder power to vote against management teams not making fast enough progress on climate change. Mr. Raymond would seem to be target No. 1 for that cause.

JP Morgan has recently made limited moves in the right direction, saying it would end loans to some fossil-fuel companies and wouldn’t finance new oil and gas projects in the Arctic. But as I said at the time, those moves struck me as “weak beer.” They still do.

In a recent speech in Florida, Jamie Dimon, the bank’s chairman and C.E.O., said: “Climate is a serious issue. But even if you don’t believe it all, sitting here as a human being, as a risk manager, why take a chance on a catastrophic outcome? And there are potential catastrophic outcomes. Most of Florida will be gone in 30 years.”

So as a risk manager, why would Mr. Dimon want the former head of a company that helped lead climate denial efforts to remain on his board?

That’s really the question before shareholders.

Ben Cushing, a Sierra Club energy campaigner, said that “tens of thousands of people have written” to JP Morgan urging that Mr. Raymond not be re-elected to the board. And they’re beginning to find powerful allies.

On Wednesday, the New York City comptroller, Scott Stringer, announced that he had filed a letter to shareholders with the U.S. Securities and Exchange Commission to urge them not to give Mr. Raymond another term on the board. In the hours after Mr. Stringer’s announcement, New York State’s comptroller, Thomas DiNapoli, and Pennsylvania’s treasurer, Joe Torsella, announced they were joining the effort.

“We must address the financial and climate risks to JP Morgan associated with fossil fuels now because the city workers who depend on our pension funds for their retirement security cannot afford for us to wait,” Mr. Stringer said in a statement. “We are urging shareholders to vote ‘no’ on Lee Raymond because his long history in the fossil fuel industry and excessive tenure on JP Morgan’s board render him unable to fulfill his fiduciary duty as an independent public company director for long-term investors.”

It seems hard to imagine that in this dangerous new world — symbolized most recently with Australia on fire and now with many cities on lockdown — that we’d just keep putting the same people back in charge. JP Morgan Chase’s annual meeting will be held online on May 19. It won’t be quite as important as the election coming on Nov. 3, but it raises the same question: Do we really want to keep doing business this way?

Bill McKibben, a founder of the climate advocacy group 350.org, teaches environmental studies at Middlebury College and is the author of “Falter: Has the Human Game Begun to Play Itself Out?”