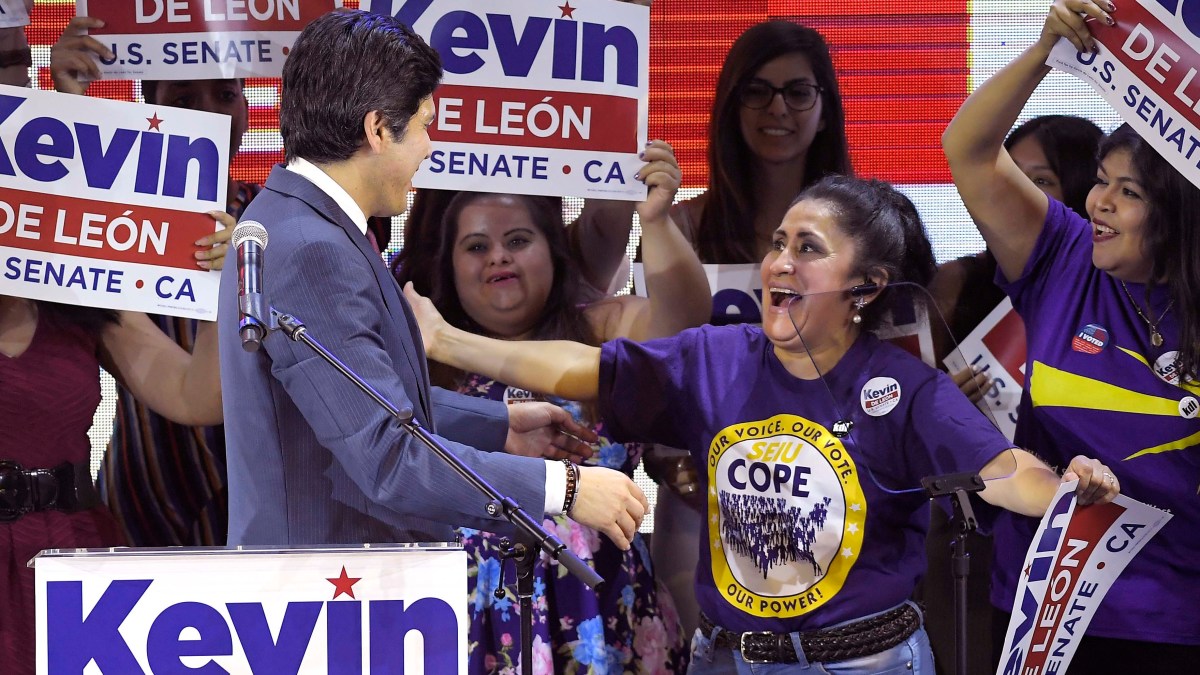 Former state Sen. Kevin de Leon appeared Wednesday to have avoided a runoff and claimed a vacant seat on the Los Angeles City Council, but county Supervisor Mark Ridley-Thomas is destined for a November runoff in his bid for a second open council post.

With an unknown number of votes still left to be tallied from Tuesday’s election, unofficial results Wednesday showed that de Leon topped a five-candidate field vying for the District 14 seat, and he was well over the 50% threshold of votes to claim the seat outright. The seat is open due to Jose Huizar being termed out of office.

Speaking to supporters at an election night rally Tuesday, de Leon talked about homelessness and made a pledge to end it.

“If we win outright tonight, I give you my word that I will roll up my sleeves and do everything that I can humanely possible to make sure that we provide dignity and respect to the tens of thousands … who are sleeping on our streets every night,” he added.

But in the District 10 race, Ridley-Thomas, whose campaign outspent his nearest challenger by hundreds of thousands of dollars, led the field but was short of the 50% vote needed to avoid a runoff. He appeared to be heading to the November runoff with the second-place finisher, attorney Grace Yoo.

The outgoing 10th District councilman, Herb Wesson, is ironically vying to fill the county Board of Supervisor seat being vacated by Ridley-Thomas due to term limits.

In the council race, Ridley-Thomas touted his sponsorship of Measure H, the county ballot measure expected to generate more than $3.5 billion over 10 years to build supportive housing to combat homelessness. He is also a co-chair on Gov. Gavin Newsom’s Council of Regional Homeless Advisors.

Ridley-Thomas served on the City Council from 1991 to 2002, so he can only serve for another four years, per the city’s term limits.

Yoo said she wants to focus on improving city infrastructure and public safety, and she said she would work with city staff and residents to be as transparent with her policymaking as possible. She also said she wants to improve city services and tackle any corruption issues that arise at City Hall.

The district includes much of central and South Los Angeles, including communities such as Koreatown, Mid City, Leimert Park, Arlington Heights,
West Adams and Little Ethiopia.

Other even-numbered council seats were also voted upon in Tuesday’s
election.

— In Council District Four, incumbent Councilman David Ryu topped the
three-candidate field, but he was narrowly shy — less than a single
percentage point — of the 50% vote total needed to avoid the runoff. It was
unclear how many late, provisional and mail-in ballots still need to be tallied. If he falls short of the 50% mark, he will face a November runoff against Nithya Raman, a homeless nonprofit leader, who placed second ahead of women’s advocate Sarah Kate Levy.

— In Council District 12, incumbent Councilman John Lee bested Loraine Lundquist, an educator and astrophysicist, and appeared to have won reelection without need for a runoff.