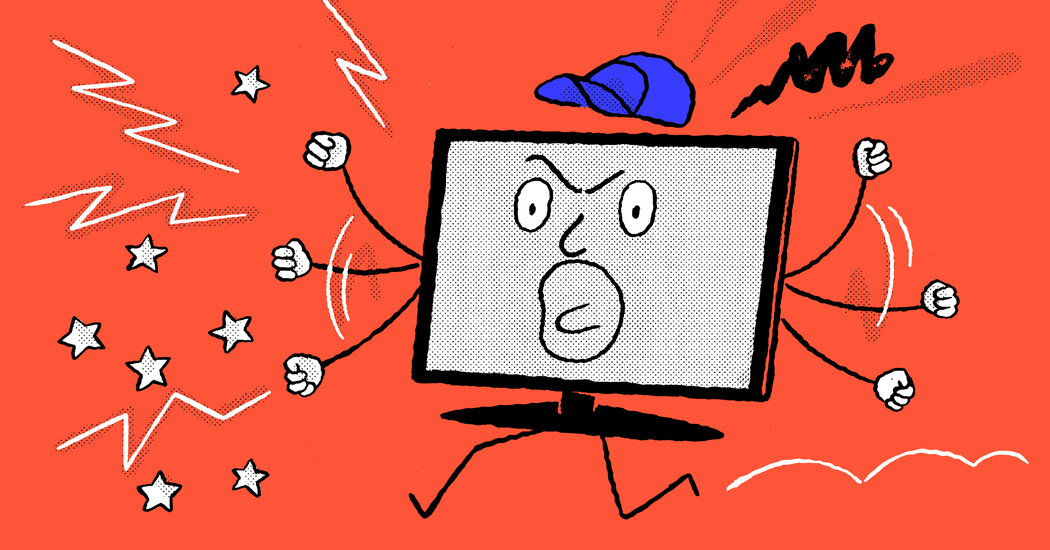 PARIS — It’s become a familiar refrain in French political life. From President Emmanuel Macron and his cabinet to the far-right opposition, from print columnists to talking heads, “Americanization” is increasingly held responsible for a whole set of social ills ailing the nation.

For some of these critics, it’s the reason so many young people — adopting the view of Black Lives Matter activists — believe police violence is a problem. For others, it explains why the quality of academic research is in decline, as fanciful ideas concocted on American college campuses like intersectionality and post-colonialism supposedly flourish. To others still, it’s why people can’t speak their mind anymore, suffocated by the threats of “cancel culture.”

Perhaps the most common gripe is that ideas and practices imported from the United States are making the French obsessed with ethnic, religious and sexual difference at the expense of their shared identity as citizens of the universal Republic.

They’re not wrong: French politics are, in fact, becoming Americanized. But the problem is not left-wing theories or censorious scolds. It is instead the rise of an insular, nationalistic, right-wing discourse driven by a belligerent style of press coverage. Distinctively French in content, the form this discourse takes — grievance-wallowing hosts conjuring embittered conversations about national decline, immigration and religion — follows America’s lead. As in the United States, the result is a degraded political landscape that empowers the far right, dragging mainstream politicians into its orbit.

Leading the charge is CNews, often called the French Fox News for its mimicry of the codes and conventions of American cable news. Launched in 2017 by a conservative billionaire, Vincent Bolloré, the network has attracted viewers by offering polemical debate marked by a hard-right bent — hitting an important milestone last month when it recorded the highest ratings of any 24-hour news network in France. The network’s star panelist is the nationalist essayist Éric Zemmour, a man convicted several times of hate speech against racial minorities and Muslims, while its star host, Pascal Praud, plays the role of objective moderator. Much like Tucker Carlson, he has a penchant for incendiary stories that allow him to speak in the name of the country’s victimized silent majority.

Instead of devoting time to the day’s top news stories, hosts tend to prefer dissecting micro-scandals that are more or less indecipherable to audiences outside the country, with chyrons capturing guests’ provocations seconds after they’re uttered. As on Fox News, the themes covered often reflect conservative anxieties about a changing nation: the size of the foreign-born population, the supposed excesses of political correctness, the place of Islam and a wounded sense of national pride.

And as with the Fox network, CNews often sets the country’s agenda. Many of the news items obsessively covered by the channel have evolved into full-blown national debates. Among them are the bullying of a teenager on social media after she called Islam a “religion of hate” on Instagram; a push from the Green Party mayor of Lyon to serve meat-free meals at school cafeterias; support from the country’s oldest student union for meetings reserved for women and nonwhite people; and the acceptance by the president’s party, En Marche, of a candidate who wears the Islamic veil onto its list for the regional elections later this month. (The party eventually withdrew the nomination under pressure.)

Such concerns, however animating for those perennially anxious about France’s secular identity, would not ordinarily dominate a country’s attention. But they’ve been elevated into national issues because leading politicians have chosen to play along — and not just those from the right-wing opposition. High-ranking members of En Marche have joined these skirmishes and, in some cases, actively opened new fronts in the culture wars themselves.

Earlier this year, Frédérique Vidal, the minister of higher education, complained of the supposed scourge of “Islamo-leftism,” a term once limited to the extreme right that refers to an imaginary political alliance between conservative Muslims and anticapitalists. Ms. Vidal even called for an investigation into the problem to examine how certain professors allegedly blur the lines between research and activism — a move rightfully condemned by the state’s top research institute as an attack on academic freedom.

Not to be outdone by his colleague, Jean-Michel Blanquer, the education minister, recently oversaw a formal ban in schools of one aspect of what’s known as “inclusive writing” — the use of both feminine and masculine word endings, separated by a middle dot, when they refer to groups of people. Though the move is unlikely to have much effect, because the practice wasn’t widely taught, it was nevertheless welcomed in some circles as a defense of the French language against creeping political correctness.

Although they claim to be protecting academic freedom, Ms. Vidal and Mr. Blanquer would be right at home in today’s Republican Party, where blasting teachers for peddling radical theories, corrupting the youth and damaging the national interest is standard fare.

What’s in it for Mr. Macron? As many have noted, the president’s advisers believe these battles bring political benefits. Most important, they’re meant to woo right-wing voters ahead of a potential rematch against Marine Le Pen, head of the far-right National Rally, in next year’s presidential election. But they’re also designed to inflict damage on the left, whose badly divided parties, struggling to talk about the problems of racial and religious discrimination within France’s secular and colorblind legal framework, regularly disagree on these very same topics.

Whether or not the strategy pays off in 2022, the culture wars are fueling support for the far right today. Polls ahead of this month’s regional elections, where 17 regional presidencies are up for grabs, show the National Rally with a solid shot of capturing majority control of a region for the first time ever — while Ms. Le Pen is within striking distance of Mr. Macron in the presidential election. That makes sense when the news cycle revolves around issues like the Islamic veil, the left’s supposed sense of moral superiority and a vastly exaggerated uptick in violence against police officers. When National Rally leaders claim their party’s longstanding grievances and preoccupations are being legitimized by the government, it’s hard to disagree.

It’s also striking to see the depths to which political discourse has sunk in a country that prides itself on its capacity for highbrow public debate and the spotlight it reserves for intellectuals. In the middle of a pandemic and after the country’s worst economic crisis since the end of World War II, the French news cycle isn’t led by discussion over truly universal issues like wealth inequality, the health system or climate change. Instead it’s focused on navel-gazing debates about identity, fueled by television personalities.

What’s more American than that?

Cole Stangler (@ColeStangler) is a journalist based in Paris who writes about labor, politics and culture.