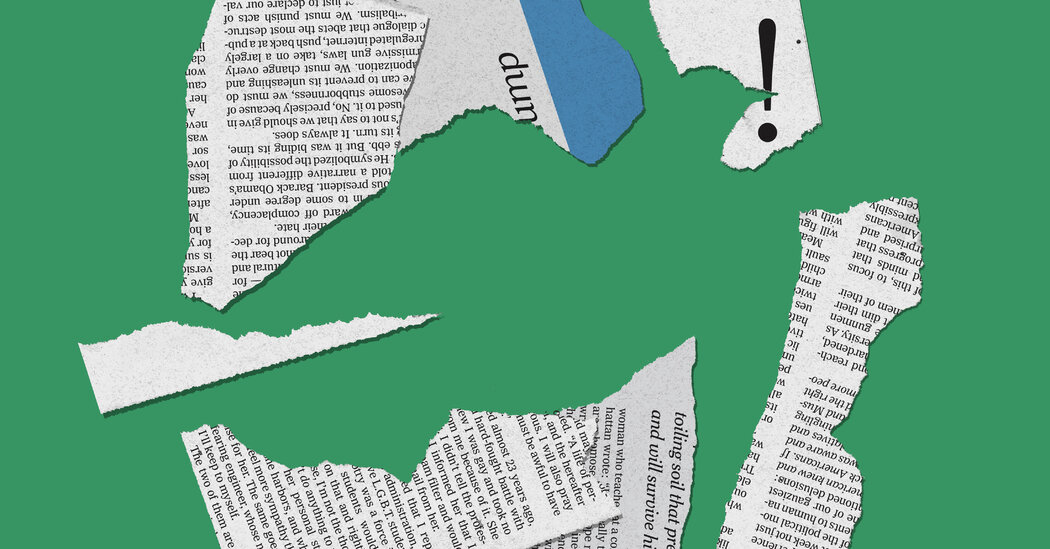 This is the last of Frank Bruni’s regular Opinion columns, but his popular weekly newsletter will live on. To keep up with his political analysis, cultural commentary and personal reflections, sign up here.

I owe Ted Cruz an apology.

Though, really, it’s readers to whom I should say I’m sorry.

One day in 2015 when I had a column due in hours and couldn’t settle on a topic, I took the easy route of unloading on Cruz, who was one of many unappealing contenders for the Republican presidential nomination. He was fair game for rebuke, no question there. But did I illuminate his dark character, enlighten my readers or advance any worthwhile cause by comparing him — repeatedly — to the unstoppable entity in the horror movie “It Follows”?

No. I just swam with the snide tide.

I did that too often. Many columnists do.

Starting, well, now, I’m a columnist no more. I’ve taken a job in academia and will split my time between teaching and writing. Maybe that’s best: Ten years is a long haul in any assignment, and while this one has been amply challenging and deeply rewarding, I always had misgivings.

I worried, and continue to worry, about the degree to which I and other journalists — opinion writers, especially — have contributed to the dynamics we decry: the toxic tenor of American discourse, the furious pitch of American politics, the volume and vitriol of it all.

But they don’t make for bold sentences or tidy talking points. So we pundits are merchants of certitude in a world where much is in doubt and many questions don’t have one right answer. As such, we may be encouraging arrogance and unyieldingness in our readers, viewers and listeners. And those attributes need no encouragement in America today.

I don’t want to understate my overarching regard for journalists. The “fake news” that Donald Trump so incessantly and conveniently howled about wasn’t fake at all. It was enterprising and infinitely more truthful than Trump himself. I remain wowed not only by the reporting on his administration but also by reporters’ ability to weather the crude attacks on them.

And I feel no ambivalence when it comes to Trump and almost no regret about my denunciations of him. He’s an amoral, dangerous man who was unfit to be president. That needed to be said, even if saying it had no effect on his loyalists. There aren’t two sides to what happened on Jan. 6 or to Trump’s and Republican lawmakers’ efforts to subvert a democratic election. Both were damnable.

But I qualified “no regret” with “almost” because there is the matter of tone. Trump’s penchant for mockery gave those of us who covered him a green light to follow suit, and I was among many who seized on that permission. There wasn’t any shame in that, and it afforded us flights of verbal fancy that plenty of readers enjoyed. But there wasn’t any honor in it, either. We sank toward Trump’s level, and he cited that descent as validation of his hostility. The reciprocal ridicule went on and on.

Will the vestiges of it pollute post-Trump journalism? My wager is yes. And it’s a sorrowful bet.

I don’t miss the stodginess that defined a lot of news writing when I got into the business three and a half decades ago. It reflected an unnatural emotional remove and an insistence on even-handedness that produced a kind of moral zombie-ism.

But I miss nuance, which has been incinerated by today’s hot takes. There aren’t as many clicks in cooling tempers and complicating people’s understanding of situations as there are in stoking their rage.

Take the overlapping issues of cancel culture and free speech. Much of what I read is absolutist: Agonized laments about cancel culture are a cynically overblown right-wing diversion from grave injustice. Or woke zealots are conducting a quasi-religious purge.

I think either can be true — depending on the circumstances and the details, which vary from case to case and prevent any summary judgment. So I haven’t written about cancel culture, not much. Yes, that’s cowardice. But to cut myself a bit of slack, it’s also a reasoned response to a marketplace that isn’t big on reason.

I think that campuses have gone way too far in quashing speech they don’t like, but I also think that some speech is so intentionally injurious and flamboyantly cruel that refusing to showcase it isn’t the defeat of constitutional principles; it’s the triumph of empathy. No single edict can govern all exigencies. But that’s a milquetoast column.

Who can really be sure that trashing the filibuster is the gateway to governmental bliss? Who can be sure it isn’t? I wish someone would write a great analysis of the filibuster that focused on two undeniable truths: We have no idea what the ultimate impact of such a consequential change would be, and there are powerful arguments for and against it. On this issue and others, Option A versus Option B amounts to a coin flip. How many pundits say that?

What we have, too often, are ideological lanes in which we’re accustomed to driving and a set of political guardrails that grows narrower over the course of our careers. We notice that we’re received best for certain perspectives; maybe television bookers put us on camera expecting particular bromides and broadsides; possibly we get paid for speaking engagements that are premised, at least tacitly, on our delivery of the same fare we’ve served before. So we keep serving it, until we’ve stopped reinvestigating and confirming the merit of it. It’s a profitable brand. But it’s also a trap.

Too many columnists generalize too broadly. I know I did when I wrote, in August 2019, about the tenacity of hate and I asserted that Americans who still opposed same-sex marriage “cannot bear the likes of me” and other gay people. A reader called me out on it, saying that there’s a difference between disagreeing with a position and detesting a person. He was right. But that distinction was lost in my excited prose.

Too many columns are less sober analyses than snarky stand-up acts or primal screams. The standup and the screams sell. My column about Cruz was a little of both, and I wish I could take it back. Its useful observations — about his nullifying lack of collegiality, about his noxious self-righteousness — were undercut by its hyperventilation. And I can’t chide politicians for ungracious manners and unsubtle minds if those inadequacies are also my own.

A month and a half after that rant about Cruz, I ripped into him again, and while I cited fresh developments, I repeated old plaints. I subsequently ran into CNN’s Dana Bash, and after we exchanged our usual pleasantries, she said, “You and Ted Cruz!”

I decided to hear that as a compliment: She was reading and remembering my columns. But was there some friendly criticism mixed in? About how knee-jerk my approach could seem and how threadbare this material was getting?

I wish I’d thought about that as much then as I do now.