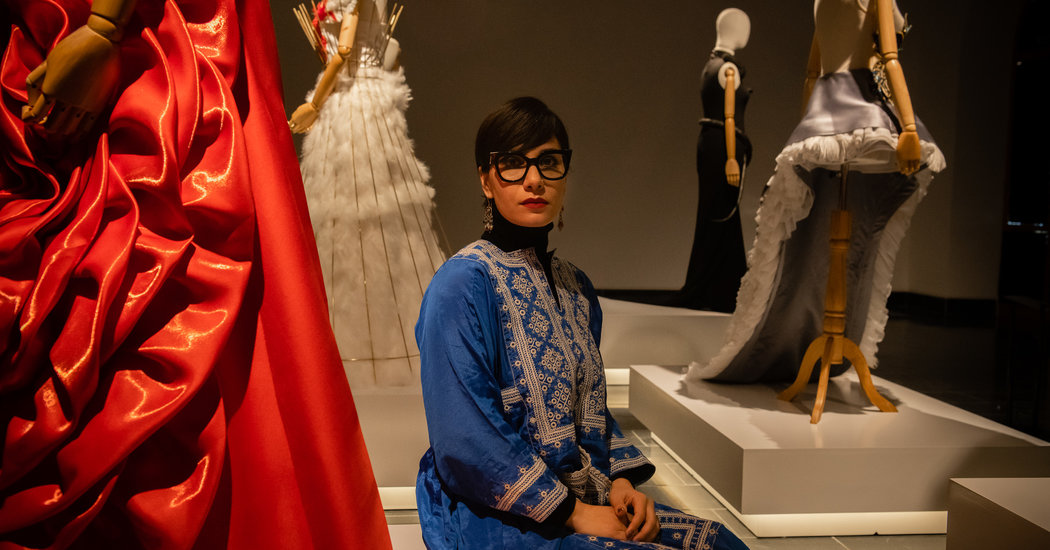 KABUL, Afghanistan — Inside an art exhibit called Abarzanan — Superwomen — stones the size of pomegranates hover above a mannequin wearing a dress fashioned from a white burial shroud.

The display commemorates a young Afghan woman, Rukhshana, 19, who was stoned to death by village men in 2015. She had fled an arranged marriage to a much older man and eloped with a young lover in a Taliban-controlled district in western Afghanistan.

The Superwomen exhibit, created by the photographer and artist Rada Akbar, honors eight trailblazing women in Afghanistan and the region — among them an ancient queen and a 10th-century poet — at a fearful time for Afghan women.

After 19 years of halting gains after the collapse of Taliban rule, a Feb. 29 agreement between the United States and the insurgents has filled many Afghan women with dread. The agreement does not mention women’s rights but does envision a return of the Taliban to a future Afghan government after American troops withdraw.

That prospect adds urgency to the Superwomen exhibit, which explores the refusal of Afghanistan’s patriarchal society to acknowledge, much less respect, the achievements of courageous women.

“It’s not as if someone gave us the rights we have — we earned them,” Ms. Akbar said. “Now we face going backward with the Taliban, the enemies of women, art and culture.”

The exhibit is showing at Chehilsoton Palace in Kabul, the country’s capital. Each of the displays in the Superwomen show tells the story of a pioneer, and each features traditional Afghan artwork by female jewelry makers, embroiderers and calligraphers.

One piece represents Khalida Popalzai, 32, a soccer player who played the game clandestinely as a girl despite persecution by the Taliban when the group ruled Afghanistan from 1996 to 2001. Ms. Popalzai later helped form the Afghan national women’s soccer team and led a movement that exposed sexual abuse and harassment by male officials.

Her story is embodied by a woman’s figure dressed in black. Three black-gloved hands clutch at her body.

One hand grasps a breast, one of its fingers shaped like a scorpion. Another hand, shaped like a snake, is wrapped around the figure’s womb. The third hand creeps over her shoulder.

The figure’s dress includes a long black train that unfurls across the floor. Visitors have to decide whether to step on the material to reach the next display, or to find a way to step over it. The train is smeared with footprints.

“We, Afghan women and our allies, are righteously enraged,” Ms. Akbar said at the exhibit’s opening ceremony. “It comes from generations of powerful men telling us to wait.”

Ms. Akbar, 32, fled the Taliban government for Pakistan with her family as a child. She returned to Afghanistan in 2002, the year after the American invasion toppled the Taliban.

Because women were essentially invisible under the Taliban, she said, “people assume women have only existed here for the past 18 years. That’s insulting.”

Ms. Akbar said Afghan women were expected to be satisfied with their incremental gains in education, the workplace and public life since 2001. But Afghanistan remained a suffocating, patriarchal society for women, especially in rural areas dominated by the Taliban, she said.

“We’re not victims — we’re champions,” she said. “We’ve fought hard for everything we’ve accomplished. But people expect us to be satisfied with basic rights, nothing more.”

Ms. Akbar is raising money to establish a permanent museum to recognize achievements by Afghan women. She said she has received approval from President Ashraf Ghani to open the museum in a refurbished palace in Kabul.

Through the Superwomen exhibit, Ms. Akbar sought to honor the contributions made by Afghan women over the centuries, most of them erased in history books written by men. She said she had to dig deeply, for instance, to uncover the stories of an Afghan queen and an empress.

One exhibit figure represents Queen Soraya Tarzi, who reigned from 1919 to 1929. She fought for women’s education, and opposed polygamy and requiring women to wear hijabs.

At least half of the exhibit’s visitors are men, Ms. Akbar said. “Most have been curious and open to listening and learning,” she said.

One visitor, Mohammad Hadi, 25, said that even after more than 18 years of post-Taliban governance, “Afghan women still have so much to deal with.” He said Afghan men should fight alongside women for expanded rights.

“This exhibition is like a lesson for a whole new generation,” he said.

Another visitor, Maryam Atefi, 16, was born after the Taliban government fell but said she had heard and read about their harsh treatment of women.

“But the Taliban are not even in power, and society is still totally against women,” she said. “This exhibition is a reminder to all Afghan women what would happen to them if the Taliban come back.”

The exhibit runs through Sunday. But for many female visitors, the stories it tells have only intensified their trepidation over the possible return of the Taliban.

“Every woman in this country is afraid that we could lose everything we’ve been fighting for all these years,” Ms. Akbar said. “As this exhibits shows, we deserve so much more.”