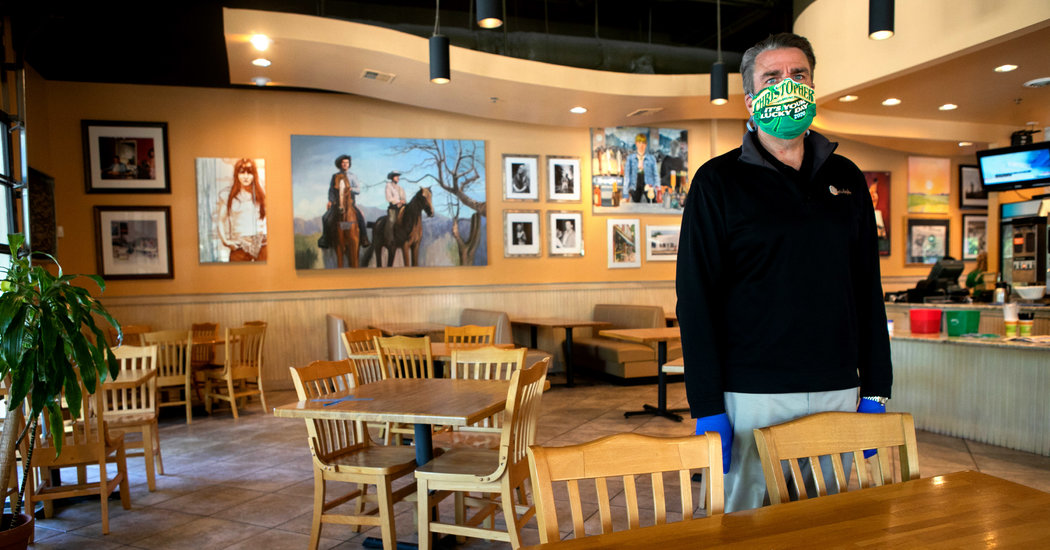 ATLANTA — Last week was a bad one for Georgia, and an especially bad one for our governor, Brian Kemp. On April 20, he announced that he would allow Georgia’s tattoo parlors, hair and nail salons and other “high touch” businesses to reopen as early as April 24, ahead of even President Trump’s ambitious plans. In the days since, the state has reverberated with political turmoil. Even the president rebuked Mr. Kemp for moving too fast.

For better or worse, the governor has made our state the nation’s canary in this particularly terrifying coal mine.

Someone had to go first, and Mr. Kemp isn’t the only political leader eager to reopen the country. But the ham-handed way he went about it makes Georgians of all stripes afraid of what comes next, and it leaves us wondering whether he is setting us up for a punishing new wave of infections. He has clashed with city and county leaders and left business owners — the people he was trying to help — in the dark.

From my vantage point as a doctor, an epidemiologist, a journalist and a native Georgian, it’s clear that if there’s anything to be gained from this moment’s anguish, it is the opportunity to help others avoid our mistakes. Here are some of the lessons my state has learned.

Despite all the warnings in the news media, it can be tempting to cherry-pick evidence that supports a move to reopen. Governor Kemp said his decision was based on “favorable data” and enhanced testing, but the more we looked, the more questionable that data looked: fluctuations among data curves, some of which conflicted with each other; weeklong lags in Georgia’s reporting of Covid-19 cases and deaths.

Never mind that neither of the metrics Mr. Kemp cited — the past week’s average of total daily cases, and daily deaths — was among the federal gating criteria, a set of benchmarks intended to help states decide when to reopen their economies. And while our testing capacity is increasing by the day, we have yet to demonstrate the coordination needed to identify emerging hot spots in real time.

It’s not just about having favorable data, or even enough testing. It’s about having the right infrastructure to assess it and ensure sustained decreases in cases.

“If the answer to all that is not an absolute yes, it raises serious questions about the wisdom of opening up sectors of the economy,” said Joshua Weitz, a quantitative biologist at the Georgia Institute of Technology who specializes in disease dynamics. Georgia’s public health funding is substantially lower than that of other states; you get the data quality you pay for.

As a consequence of the way our state gathers, reports and publicizes data, many Georgians don’t trust that our leadership is making smart decisions. And while on Monday Mr. Kemp announced some changes in data reporting that will most likely improve transparency, many of my neighbors already share a creeping sense that the most critical decision of his administration was made in a data-free zone.

Debatable: Agree to disagree, or disagree better? Broaden your perspective with sharp arguments on the most pressing issues of the week.

Don’t punish small businesses by treating their decision to reopen — or not — as a purity test.

Last weekend, Jenn Jones, who owns the Creature Studio hair salon and spa in Atlanta, told me that her business would go under if she didn’t reopen by June. So she’s reopening. She was slowly collecting masks and gloves for her employees, and she had redesigned her salon space to accommodate the social distancing recommended by the Georgia Board of Cosmetology and Barbers.

Her decision does not signal any support for Mr. Kemp. “I don’t align with his policies whatsoever,” she said, echoing a position taken by business owners and politicians across the state. It’s not about politics; it’s about survival.

But you wouldn’t grasp the complexity of these decisions from the responses of people watching them play out from afar. On social media and over email, customers and neighbors are threatening to boycott businesses that reopen, regardless of the degree to which they consider customers’ safety. People on my own neighborhood website are circulating lists of local businesses that do and do not open as a pandemic purity test of sorts, intended to guide the buying decisions people will make when the pandemic is over.

Somehow, we’ve reached the point where caring about public health has become a progressive issue, while the nation’s economy has become a conservative one. This division is false; no one should have to choose between financial annihilation and helping to spread a deadly disease. But thanks to unforgivable failures of political leadership, business owners in Georgia are bearing the burden of that choice — and the same will happen in every state that follows our lead.

We have dangerous tensions between our state and local governments.

The governor’s decision came as a surprise to our mayors, who were not consulted or informed about his executive order in advance — and were barred by one of its clauses from issuing local orders more or less restrictive than his.

Many felt the choice was the wrong one for their communities. Bo Dorough, a Democrat, is the mayor of Albany, Ga., which at one point in the pandemic had the most Covid-19 deaths per capita outside New York City. He pleaded with the governor to “recognize there are exceptions.” Atlanta’s Democratic mayor, Keisha Lance Bottoms, who described seeing people lined up for haircuts and manicures in the days following the reopening announcement, said, “What we are essentially saying in Georgia is, ‘Go bowling and we’ll have a bed waiting on you.’”

Even Randy Toms, a Republican who is the mayor of Warner Robins, near Atlanta, said the order was concerning. “I don’t want people to go out and believe the virus is gone,” he said. But the governor didn’t budge.

It’s unclear why Mr. Kemp made such a unilateral decision, but it’s not surprising. The move might be intended as payback: For several weeks in March, Mr. Kemp declined to shut Georgia down despite dire projections of the pandemic’s public health impact. Many local governments issued countywide shelter-in-place orders during that time, which Mr. Kemp’s chief of staff decried as “overreach.”

Fortunately, some other states with imminent plans to reopen, like neighboring Tennessee, have carved out exceptions or given leeway to local governments. But governors, especially Republicans who have historically clashed with Democratic mayors, may be lured into using the reopening as leverage. Don’t. The people who suffer most from the results of uncoordinated public health efforts are often the people who have the least. Save the peevishness for a lower-stakes crisis.

Success is up to us.

Georgia went first. Some of our confusion and fears were inevitable — but the governor exacerbated those with his poor planning, and he may have set us up for a relapse. Inevitably, other governors will make other mistakes, even if they learn from Georgia’s mistakes.

But as we — citizens, business owners and local politicians — are learning, that doesn’t mean we will fail. As other states reopen — and they will — saving ourselves and one another will be up to us.

Keren Landman is a physician who specializes in infectious diseases and a journalist who writes about public health.