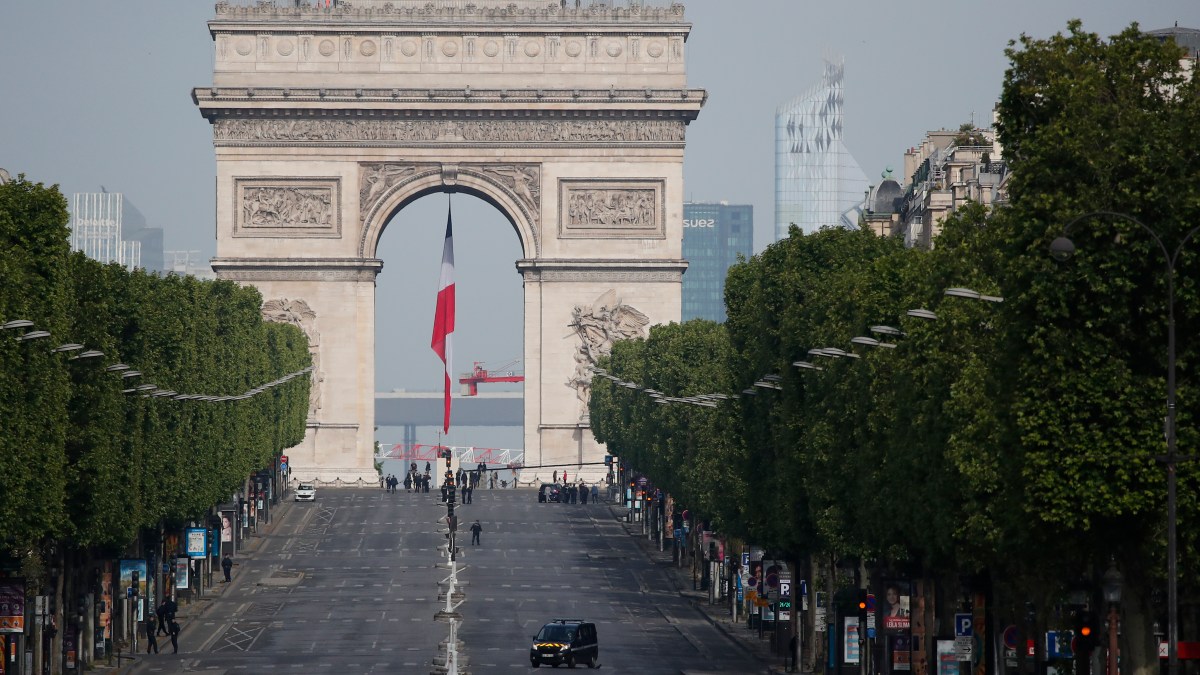 European leaders were holding muted commemorations Friday to mark the end of World War II on the continent, as coronavirus lockdowns kept crowds from celebrating VE Day. Across the ocean, Americans awaited what is expected to be the worst set of unemployment figures since record-keeping began in 1948.

The European celebrations came in stark contrast to they way millions of its citizens spilled onto the streets 75 years ago, waving flags, flashing victory signs and dancing in joy because the carnage on their continent had ended.

Street parties this year were banned in Britain. In France, President Emmanuel Macron laid a wreath at the Arc de Triomphe monument at the top of a largely deserted Champs-Elysees Avenue as the country is still under a strict lockdown until Monday.

A day earlier, Macron spoke to his Russian counterpart Vladimir Putin, who had to cancel his own huge Victory Day parade that had been planned for Saturday in Moscow. Macron said the pandemic “makes the construction of peace and stability on the continent and in the rest of the world more necessary than ever,” according to a statement.

With nearly 26,000 confirmed virus deaths, France is among the world’s top five hardest-hit nations in the pandemic. Britain, with over 30,000 confirmed deaths, is second only to the U.S., which has seen nearly 76,000 people killed by the virus. Russia has reported only 1,625 virus deaths, but infections are jumping by over 10,000 each day. Experts believe all those figures — especially the Russian death toll — understate the true impact of the coronavirus.

In Germany, President Frank-Walter Steinmeier, Chancellor Angela Merkel and the heads of the parliament and top court were to lay wreaths at the memorial to victims of war and violence in Berlin. The low-key ceremony replaces a bigger event with 1,600 guests that Steinmeier had planned to lead outside the Reichstag parliament building in Berlin.

As European nations and U.S. states plot tentative, chaotic and often completely different road maps out of their lockdowns while still attempting to avoid a second wave of infections, China and South Korea highlighted the risks of easing measures. Both Asian nations on Friday reported more coronavirus cases after relaxing restrictions.

South Korea’s 13 new infections were its first increase higher than 10 in five days. A dozen were linked to a 29-year-old who managed to visit three nightclubs in Seoul last weekend.

“A drop of ink in clear water spreads swiftly,” Vice Health Minister Kim Gang-lip said, urging vigilance to guard the country’s hard-won gains. “Anyone can become that drop of ink that spreads COVID-19.”

South Korea’s top infectious disease expert said the country could possibly push back its plans to reopen schools if infections surge again over the upcoming weekend after a weeks-long decline.

In China, where the new coronavirus first emerged late last year, authorities reported 17 new virus cases, including 16 people not showing any symptoms. No new deaths have been reported for more than three weeks.

Health experts say every nation will see some type of second wave of infections after their lockdowns ease.

Yet the economic impact of the measures on the world’s largest economy will be on full display Friday when the U.S. government is expected to report the unemployment rate for April.

The rate could reach 16% or more, according to economists surveyed by the data provider FactSet. Some 33 million Americans have sought unemployment benefits since the virus hit and experts say 21 million jobs may have been lost for good. That would mean that nearly all the job growth in the 11 years since the Great Recession ended had been wiped out in one month.

And even those figures won’t capture all the workers who have seen their hours or pay cut in the United States. Around the world, millions of day laborers in Asia are going hungry as their jobs vanish, tourism workers in Africa have seen whole sections of their fragile economies vanish and unemployment in the 19-country eurozone is expected to surpass 10% in the coming months. The U.K. economy is forecast to shrink by the most since 1706.

On the anniversary of Nazi Germany’s surrender to Allied forces in Europe in 1945, United Nations Secretary-General Antonio Guterres warned that the coronavirus pandemic is unleashing “a tsunami of hate and xenophobia, scapegoating and scare-mongering” and appealed for “an all-out effort to end hate speech globally.”

The U.N. chief warned that “anti-foreigner sentiment has surged online and in the streets, anti-Semitic conspiracy theories have spread, and COVID-19-related anti-Muslim attacks have occurred.”

Worldwide, the virus has infected more than 3.8 million people and killed nearly 270,000, according to a tally by Johns Hopkins University based on official data. But limited testing, differences in counting the dead and concealment by some governments undoubtedly mean the true scale of the pandemic is much greater.

In Iran, which is battling the worst outbreak in the Middle East while under heavy U.S. sanctions, Friday prayers were resuming in mosques in 146 cities after being banned for more than two months, the country’s semi-official Tasnim news agency reported. Prayer gatherings will continue to be banned in major cities, including all provincial capitals, for now, it reported.

Pressures are growing mightily in the United States to loosen coronavirus restrictions. But an Associated Press analysis found that 17 states appeared to have not met one of the key benchmarks set by the White House for loosening up their coronavirus restrictions — a 14-day downward trajectory in new cases or positive test rates.

This week, University of Washington researchers nearly doubled their projection of virus deaths in the U.S. to about 134,000 through early August, largely because lifting stay-at-home restrictions will mean the virus spreads to more people.

In Nebraska, the number of new infections has risen recently, but Gov. Pete Ricketts, a Republican, still eased rules to allow hair salons, tattoo parlors, restaurants and churches to reopen with restrictions in most counties.

“We could ban just about all deaths on the interstate by reducing the speed to 5 mph, but we don’t do that,” Ricketts said.

Corder reported from The Hague, Netherlands. Associated Press journalists around the world contributed to this report.