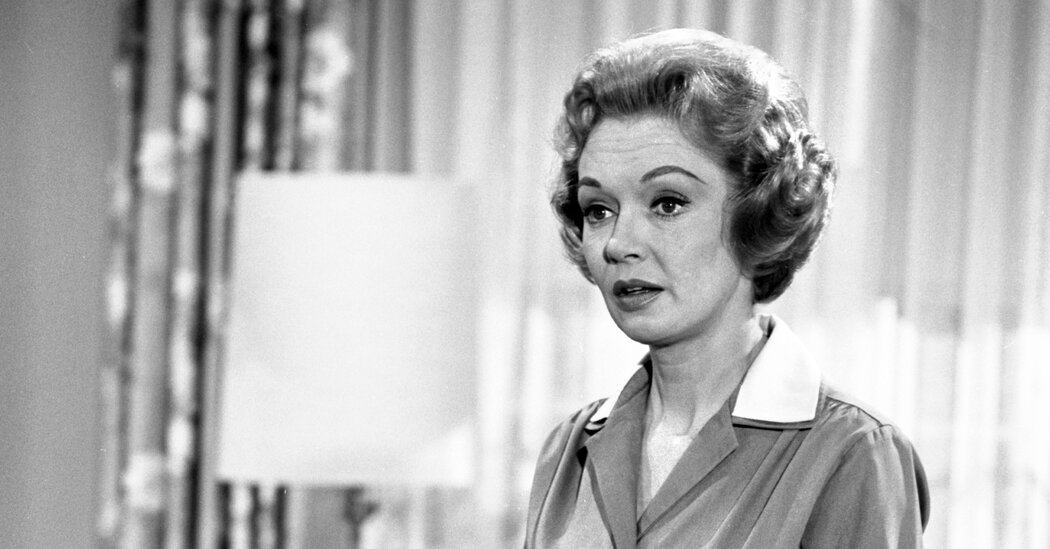 She was a prolific B-movie actress early in her career, but she became best known for her role as Alice Mitchell, the gentle mother of Dennis, on the CBS show.

Gloria Henry, a B-movie actress of the 1940s and ’50s who became best known as the sunny, preternaturally patient mom on the television series “Dennis the Menace,” died on Saturday at her home in Los Angeles. She was 98.

The death was confirmed by her daughter, Erin Ellwood.

Ms. Henry was 36 and a veteran of more than two dozen films in 1959 when she was cast as Alice Mitchell, the gentle, tolerant but constantly horrified mother in “Dennis the Menace,” a sitcom based on Hank Ketcham’s popular comic strip. Dennis (played by Jay North) was an angelic little boy on the surface, but every time he tried to help or just do something nice, it somehow backfired. The show ran for four seasons on CBS.

Gloria Eileen McEniry was born in New Orleans on April 2, 1923, and attended Worcester Art Museum School in Massachusetts. She moved to Los Angeles in her teens and began working in radio, where she began using the last name Henry.

She made her movie debut in the 1947 drama “Sport of Kings,” set in Kentucky horse country. Ms. Henry started at the top in the B-movie genre, starring in the film as a young veterinarian.

She also appeared in several sports comedies, including “Triple Threat” (1948), with Richard Crane, and “Kill the Umpire” (1950), with William Bendix. Her best-known film was probably “Rancho Notorious” (1952), which was directed by Fritz Lang and starred Marlene Dietrich.

Once Ms. Henry had made her television debut, in a 1952 episode of “Fireside Theater,” she devoted her career almost exclusively to series TV. Over four decades, on and off, she appeared in shows from “My Little Margie,” “Perry Mason” and “The Life of Riley” to “Dallas,” “Newhart” and “Doogie Howser, M.D.”

Her final television appearance was on a 2012 episode of the sitcom “Parks and Recreation.”

Ms. Henry’s first marriage, in 1943 to Robert D. Lamb, ended in divorce in 1948. She married Craig Ellwood, the California Modernist architect, in 1949. They divorced in 1977. In addition to her daughter, she is survived by two sons, Jeffrey and Adam, and a granddaughter.

Ms. Henry, who kept in touch with Mr. North over the years, often commented on her “Dennis the Menace” character’s amazing restraint with her son. “I wasn’t allowed to yell at Jay North,” she told The Los Angeles Times at a 1989 gathering of actresses who had played famous mothers on television. “It was difficult. Being a normal, in-reality mother, I yelled at my children a lot.”