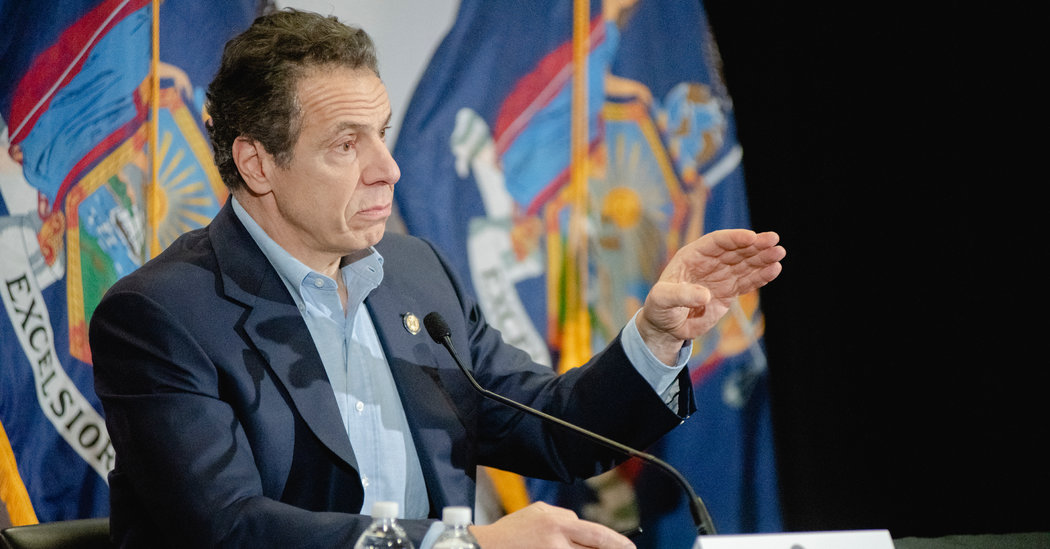 ALBANY, N.Y. — A day after seemingly expressing regret for not sounding the alarm on the coronavirus crisis sooner, Gov. Andrew M. Cuomo of New York apparently decided on Tuesday that there was enough blame to spread far and wide.

At his daily briefing, Mr. Cuomo faulted a raft of other forces, including the World Health Organization, various federal agencies and the news media, for not doing their part to caution the world of the pandemic threat.

Specifically, Mr. Cuomo targeted the National Institutes of Health and the Centers for Disease Control — “the N.I.H, the C.D.C., that whole alphabet soup of agencies,” he called them — and the nation’s intelligence community for not issuing more urgent advisories late last year, before health officials in China had even publicly identified the virus.

“Where was everyone?” he said, suggesting that intelligence agents had not recognized that “this is in China, and they have something called an airplane, and you can get on an airplane and you can come to the United States.”

He added: “Where was all of the bugle blowers who should say, ‘Be careful, there is a virus in China that may be in the United States.’ That was November and December. We’re sitting here, January, February, still debating how serious this is.”

The governor’s comments came on the heels of some less corrosive remarks that were broadcast Monday night on HBO, in which the governor also wondered who had failed to alert the public — but simultaneously took blame for not doing so himself.

“I wish someone stood up and blew the bugle,” Mr. Cuomo said in the HBO interview, conducted by the Axios reporter Jonathan Swan. “And if no one was going to blow the bugle, I would feel much better if I was a bugle blower last December and January, even though no one danced to the music, I would feel better.”

But his comments on Tuesday had no such mea culpa, with Mr. Cuomo instead questioning “Where were all the experts?” and insisting that “governors don’t do global pandemics.”

Mr. Cuomo’s remarks, which also included critiques of news organizations — “Where was The New York Times? Where was The Wall Street Journal?” — bore a passing resemblance to critiques leveled by President Trump at federal agencies and institutions, including the president’s attack on Monday on the “vicious” and “hostile lame-stream media,” in “the midst of a National Emergency.”

Mr. Trump and other Republicans have also sought to blame the coronavirus outbreak on the W.H.O., which Mr. Cuomo singled out by name, too. The W.H.O., which first identified the virus as a pneumonia of unknown cause on Jan. 5, did not return requests for comments on the governor’s remarks.

Mr. Cuomo has largely been praised for the magnanimous tone he has usually tried to strike in his daily briefings, often saying it is not the time for recrimination or politics, a topic he mused about earlier this month while quoting the Bible and Abraham Lincoln.

“This is no time and no place for division,” Mr. Cuomo said on April 18. “We have our hands full as it is.”

Mr. Cuomo’s handling of the crisis in New York, where more than 17,500 people have died, has resulted in a spike in his popularity, but more critical evaluations of the state’s overall response have increasingly emerged with the mounting death toll, particularly in comparison with other states and cities that have had less serious outcomes thus far.

The governor has argued that the state was quick to respond to the outbreak, noting it shut down nonessential businesses and ordered residents to stay at home as of the evening of March 22. That was three days after a stay-at-home order went into effect in California, a state with more than twice the population of New York but about a tenth of the confirmed deaths, and about a sixth of the cases.

The governor had previously wondered aloud about responsibility for detecting the virus, saying in mid-March that “we knew this was happening in China back in November” and noting how air travel could spread the disease.

The state’s first guidance on the outbreak came on Jan. 17, when the state’s Health Department issued a one-page sheet for health care providers, along with information from the C.D.C.

A week later, after the confirmation of two cases in the United States, the governor ordered the Port Authority to post signs about the virus at local airports in the New York City area, and confirmed the screening of passengers arriving from Wuhan.

Less than a week later, the W.H.O. declared a global health emergency. Three days later, Mr. Cuomo announced a hotline for worried travelers and offered assurances that the state was on the case.

“There is no reason to panic,” he said, noting that “there are different viruses that develop” all the time. “Take every one seriously, but don’t have an overly anxious reaction to any one situation. I think that applies to this situation.”

Well before that, various news accounts had detailed the risk of a global outbreak. The Times’s first article on the coronavirus appeared on Jan. 6, out of Beijing. Two days later, a second story was published out of Hong Kong, the same day the governor delivered his annual State of the State address in Albany.

A day later, Mr. Cuomo unveiled a surreal, symbolic poster of his agenda for the year, something he said he had been working on since November.

By late January, The Times was reporting that the lockdown measures imposed in China were most likely too late to prevent an outbreak.

“Our reporters in Wuhan, Beijing and Hong Kong, and later in Italy, Washington State, and around the United States have covered the story relentlessly and at great personal risk,” said Danielle Rhoades Ha, a spokeswoman for The Times.

On Tuesday afternoon, Mr. Cuomo said in an interview that he had no regrets about his comments.

“I posed the question, because the American people deserve the answer so this doesn’t happen again, and I speak truth to power,” he said, reiterating his criticism that domestic and international health organizations, intelligence agencies, and “international newspapers” like The Times and The Journal should have alerted the world last fall.

“And let us learn the lesson, because enough people have died,” he concluded, “And while it may make the powerful uncomfortable, the American people deserve the truth.”