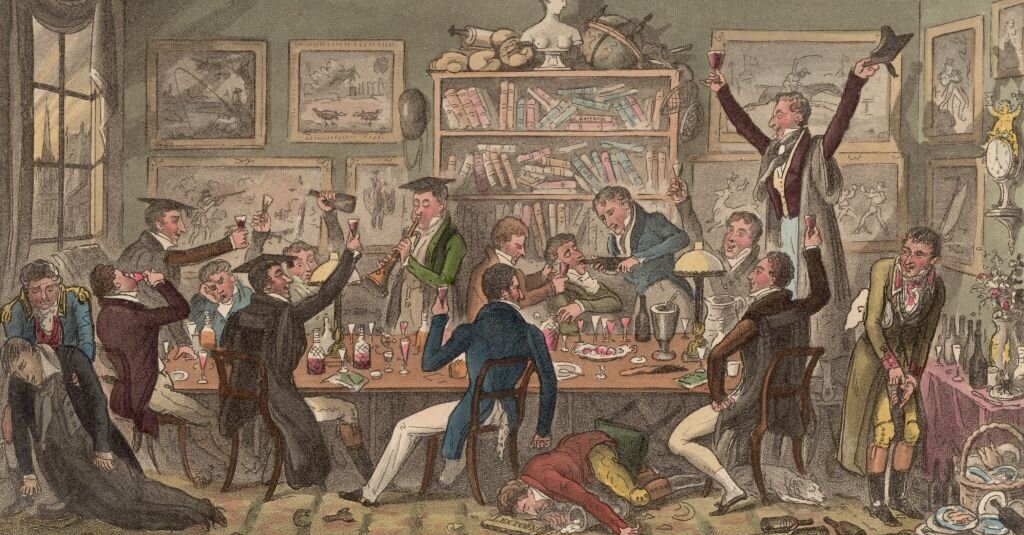 In the 19th century, the use of grandiloquent, fanciful words was all the rage, which proves that overcomplicating things has always been funny. And is it a uniquely American phenomenon? Some linguists believe so.

Have you ever been inveigled? Bamboozled? Have you been hornswoggled by lexiphanic rodomontade? Have you fallen victim to the flummery of an ultracrepidarian?

Fear not — you can learn to parse these fanciful formations and lexical sockdolagers. You might even pick up some parlance with which to pepper your own persiflage.

We’re talking about grandiloquent words, delightful colloquialisms mostly from the 19th century. John Camden Hotten’s “Dictionary of Modern Slang,” published in 1859, described them as vulgarisms of an “indulgent public.”

In the introduction to his slang dictionary, Hotten wrote that “vulgar words representing action and swift movement often owe their origin to sound.” Such is the case with the word “kerplunk,” but even non-onomatopoeic slang words might hint at their meanings through explosive pronunciation.

Is a grandiloquent word the same as a neologism?

Grandiloquent words are different. These terms stand in for simple words like “leave” and “noisy,” but are much better suited to polemics, elaborate insults and accusations of betrayal.

Jesse Sheidlower, a lexicographer and former editor at large of the Oxford English Dictionary, attributed the appearance of these words in the early 19th century to two overlapping phenomena: a rise in literacy and the popularity of bombastic humor. This humor, associated with the exaggerated stories and “tall talk” of the Western frontier, led to more embellished locution, like this 1860s description of a Southerner that H.L. Mencken quoted in his book “The American Language”: “When he boasted that his sister ‘slings the nastiest ankle in old Kentuck,’ he intended only to say that she was a good dancer.”

Peter Sokolowski, Merriam-Webster’s editor at large, said that it was hard to know exactly where these words came from — they were probably spoken far more often than they were printed — but that their association with older generations might explain their popularity.

Mr. Sheidlower said the use of these “faux-educated” words was tied up with the American idea of relying on one’s own personal wits, rather than on a formal education. “These were people who were self-made, and self-made people made up their own words,” Mr. Sokolowski added.

Grandiloquent terms in particular aimed to dignify the pedestrian. People might use “pseudo-Latinisms for relatively common things,” similar to the 17th-century inkhornisms that preceded them, Sheidlower said. Hopefully, these terms didn’t confuse the issue when a gentleman named John Hopkinson asked for help locating his lost horse.

Though much denounced in their day, these linguistic marvels symbolize the perpetual evolution of language, and are still amusing nearly two centuries after their invention.

Five Grandiloquent Words That We Love

Absquatulate: To leave in a hurry or to make off with something. “Absquatulate” is presumably composed of the word “squat” and surrounded by root-word addenda: “ab-” as in “away” and “-ulate” as in “perambulate.” It was first recorded in an Ohio newspaper in 1830, according to the Oxford English Dictionary, or OED. Its fraternal twin, “absquatulize,” was first recorded one year earlier.

Mr. Sheidlower listed “absquatulate,” along with “bodacious” and “obfusticate,” among the few grandiloquent words that are in use today. But he said it was unclear whether these words were used sincerely when they first originated.

“In a number of cases, we know that these words were proposed or invented, then became used because people found them in dictionaries and thought they were funny,” Mr. Sheidlower said. “Words like ‘absquatulate’ are generally in use because people hear them in lists of amusing words, not because they hear them in conversation and pick them up.”

Hornswoggle: To deceive or cheat. “Hornswoggle” fits right into the kind of frontier speech caricatured by Yosemite Sam, but outside its association with the cartoon gunslinger there is almost no information on the word. OED describes it as “probably fanciful,” meaning it may have been made up. Hornswoggle also happens to be the name of a professional wrestler.

Sockdolager: A decisive blow or, more generally, something exceptional. It was first recorded in 1830. According to the Dictionary of American Regional English, commonly known as DARE, the “sock” component probably comes from the synonym for “to strike.”

As an alternate definition, OED lists “something exceptional in any respect, especially a large fish.” This definition does not appear to be related to a section of the Colorado River in the Grand Canyon known as Sockdolager Rapids. According to Westernriver.com, crew members on John Wesley Powell’s first expedition “could not find a way to portage or line their boats around this cataract, so they had to run it head on.” In 1872, on the second expedition, Powell’s crew decided to name the rapids “‘Sockdolager,’ a slang term of the day meaning a heavy or knockdown blow,” the website says.

Callithumpian: Cacophonous, especially as a celebration or protest. Like “absquatulate,” “callithumpian” contains a familiar word — thump — right in the middle. The -ian adjective suffix is another that borrows from Latin, and while OED lists “calli-” as arbitrary, DARE speculates that it has a precedent in another word: “gally,” meaning to frighten or confuse with noise.

The American use of callithumpian was first recorded as “calathumpian,” in 1810, but its English ancestor, “Gallithumpians,” another term for a noisy group, preceded it. This word first appeared in the late 18th century and described groups that disturbed the peace at parliamentary elections in Southern England.

Ferricadouzer: A knockdown punch. The origin of this term is contentious, with much disagreement among different dictionaries. While Hotten speculated that it was derived from Italian (perhaps from “fare cadere,” which means to drop or fall), DARE suggests that “ferri-” is from the Latin “ferrum,” meaning iron. With the addition of the “ca” intensifier (which can be found in “caboodle,” and is related to the “ker-” prefix of “kerplunk,” “kersmash” and “kerflooey”) and “douser,” which DARE defines as “a heavy blow,” “ferricadouzer” becomes a weighty wallop of a word.

DARE, in supporting this etymology, cites a 1930 dictionary of “old time words” that defines “ferricadouzer” as “a sound beating given with an iron poker to unruly scholars of both sexes.”

“If you’re a native speaker of American English, these words make you smile, so that means they work,” Mr. Sokolowski said. “They just work.”

Are there other grandiloquent vocables that you find particularly lobdocious? If so, please explicate in the section set aside for exposition.

Join us here to solve Crosswords, The Mini, and other games by The New York Times