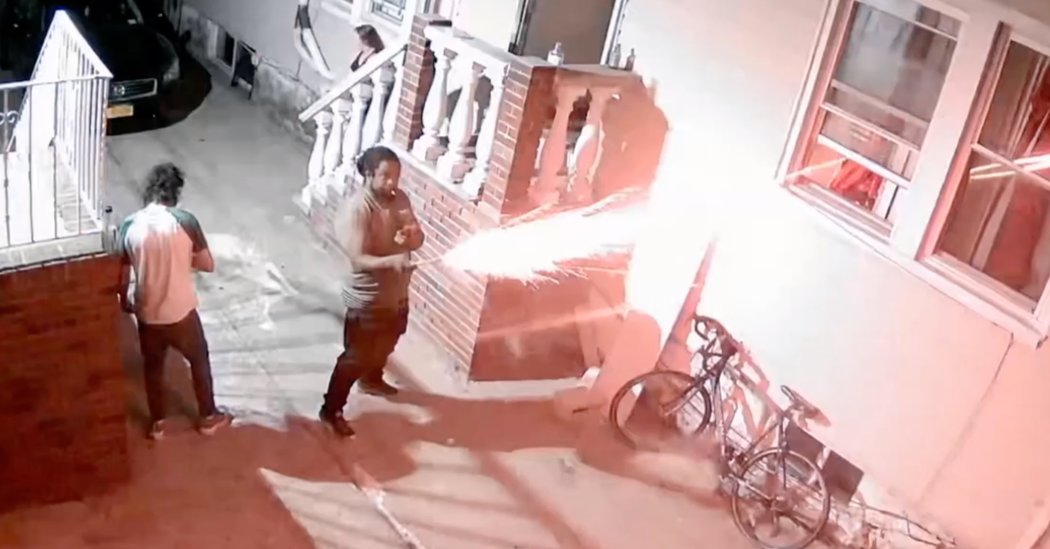 Three people stand in a driveway between two houses in Brooklyn.

One of them, his right hand raised in the air, shoots several fireworks into the sky. Then his arm drops toward the ground, and his next burst goes through an open window into one of the homes.

What follows, in a video of the incident, is a striking example of the dangers posed by the amateur pyrotechnic displays that are rattling New York’s neighborhoods, prompting officials to initiate a citywide crackdown.

Within minutes, flames rise inside the house. Neither the man nor the other two people notice, and the man continues to ignite fireworks. At one point, as the flames climb higher, he enters the burning house, then comes back out and resumes his incendiary activity.

It takes the group several minutes to see the fire. By then, the back of the house is engulfed in flames. After a feeble attempt to douse the blaze with a garden hose, all three flee the driveway. As they do, the siding on the second house appears to melt from the heat of the fire next door.

The scene was captured on video footage released by the Fire Department on Thursday as officials announced the arrest of the man they said shot off the fireworks, Damien Bend, 36, on a misdemeanor arson charge. The house Mr. Bend was said to have set on fire, officials said, was his own.

The episode occurred around 9:30 p.m. on June 24 in the Flatlands section of Brooklyn, a day after Mayor Bill de Blasio, responding to a surge in complaints to New York City’s help and emergency hotlines, announced the crackdown on the illegal use and distribution of fireworks.

For some people, the constant displays have been a release after months of boredom and seclusion during the near-total shutdown of daily life prompted by the coronavirus pandemic.

For others, the fireworks are a celebration of hard-fought strides made during the continuing protests against systemic racism, and a show of defiance toward the police.

But for many people, they have been an unwelcome nightly soundtrack to an existence that is still far from normal.

At the time of Mr. de Blasio’s announcement, the city had received more than 12,500 calls to its 911 system for illegal fireworks in June, according to the police. That was roughly 12 times the number of such calls in the first six months of last year, the police said.

In Brooklyn, where the cacophony of bangs, pop and blasts has left residents of several neighborhoods jangled, more than 4,500 fireworks complaints had come in to the city’s 311 system by then, the police said. That was more than 80 times the number of 311 calls the city got in the first six months of 2019.

Mr. Bend was the 18th person to be arrested by fire marshals on a fireworks-related charge in recent days, and the first to face an arson charge, officials said. The others have been charged with illegal possession of fireworks and reckless endangerment, officials said.

Since the crackdown began, officials said, marshals have seized $36,700 worth of illegal fireworks.

Mr. Bend appeared in court in Brooklyn on Thursday and was given a desk appearance ticket, according to a spokeswoman for the Brooklyn district attorney’s office. No return date was set. Mr. Bend could not immediately be reached for comment, and it was not clear whether he had a lawyer.

Twelve units and 60 firefighters were needed to bring the fire under control, officials said. No one was injured, but the house sustained major fire, smoke and water damage and was left uninhabitable, officials said.