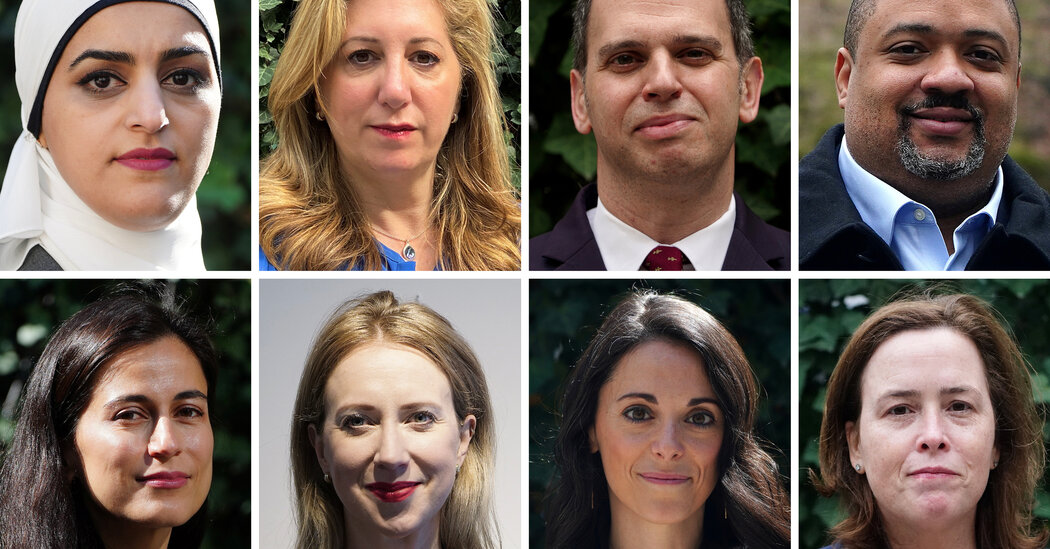 Eight candidates are vying to take over the country’s largest local prosecutor’s office. The winner will inherit a potential Trump investigation.

Eight Democrats are running to replace Cyrus Vance Jr. as Manhattan district attorney, jockeying to lead one of the most well-known and influential local prosecutor’s offices in the country at a time when views of the criminal justice system have shifted.

The office is home to many high-profile investigations, including the ongoing inquiry into former President Donald J. Trump and his family business.

The contenders — five of whom have been prosecutors before and three of whom have not — mostly agree on a basic tenet: The office needs to change. But they are divided over just how far they would push reform efforts.

Polling in the race has been sparse, but a recent survey found that the fund-raising leaders, Tali Farhadian Weinstein and Alvin Bragg, are tied with the most support. Because the district attorney is a state election rather than a municipal one, voting will not be ranked choice, as it is in the citywide elections, and voters will select only one candidate.

Here’s a list of the candidates with details on their vision for the office.

Ms. Aboushi’s candidacy is informed by her experience as a young teenager seeing her father convicted on federal conspiracy charges and sentenced to prison for more than two decades.

As a result of that ordeal and its effect on her family, Ms. Aboushi says she has insight into the perspective of those who are and will be prosecuted by the office she hopes to lead, a striking approach in a prosecutorial race.

In a race filled with calls for reform, Ms. Aboushi is the candidate most consistently focused on the system itself and on making it less punitive. She has pledged to cut the office by at least half, and she has stressed the need for alternatives to incarceration wherever possible.

Mr. Bragg, a lifelong resident of Harlem, has called for a balanced approach between civil rights and public safety. A graduate of Harvard Law School, he peppers his public appearances with stories about his personal life, frequently focusing on his and his family’s fraught encounters with the criminal justice system.

He said he first thought about being a prosecutor while clerking for a federal judge and seeing the way prosecutors could protect the public through major investigations. After serving as a civil rights lawyer, Mr. Bragg became a federal prosecutor, focusing on issues like police misconduct and public corruption. He led a unit in the New York attorney general’s office that investigated police killings of unarmed civilians, and later became a chief deputy state attorney general.

“I bring a breath of reality to the race,” Ms. Crotty said in an interview. The longtime resident of Lower Manhattan is the most traditional candidate in the race, more focused on public safety than on reform.

That puts her out of step with most of her colleagues, who have campaigned in large part on the racial biases in the criminal justice system. While she acknowledges that such biases exist, Ms. Crotty has said that rather than directing the office to stop prosecuting entire categories of crime, she would assess matters on a case-by-case basis. She has been endorsed by multiple police unions.

A Rhodes scholar, Ms. Farhadian Weinstein has a sterling résumé, having clerked for Merrick B. Garland (now the U.S. attorney general) and Justice Sandra Day O’Connor. She was also a lawyer for Eric Holder, when he was U.S. attorney general, and she later worked as a federal prosecutor.

Ms. Farhadian Weinstein has raised more money than any of her competitors, including $8.2 million she gave to her own campaign. Early in the race, she frequently spoke about reform. But in recent months, she has been more direct in describing her plans for prosecution and has placed more emphasis on public safety.

She said in an interview that there was one question that prosecutors should always ask themselves: “Is my intervention as an actor in the criminal justice system increasing public safety or not?”

Ms. Florence, a veteran of the Manhattan district attorney’s office, where she worked for 25 years, has spent much of her career prosecuting fraud and corruption cases. As the head of Mr. Vance’s Construction Fraud Task Force, she led cases involving worker deaths and wage theft. She has significant labor backing, with the endorsement of 20 unions.

There is a shadow over Ms. Florence’s campaign. In 2020, she resigned from the office after a judge found that she had withheld evidence from defense lawyers in a major bribery case, which constitutes an ethics violation. A spokeswoman for Ms. Florence’s campaign has said the candidate has taken “full responsibility” for the mistake.

Ms. Lang, another veteran of Mr. Vance’s office, is the most policy-forward candidate in the race. She has released the outlines of her approach to dozens of issues, including hate crimes, police accountability and tenants’ rights. She has also emphasized her prosecutorial experience, including her investigation of a drug ring in East Harlem.

A granddaughter of the philanthropist Eugene Lang, Ms. Lang became the director of the Institute for Innovation in Prosecution at John Jay College in 2018. In her view, prosecution should take a holistic view of the communities affected by crime: In East Harlem, for instance, she worked with a coalition of different groups — including the police and tenants — to revitalize the area and make it more welcoming to children.

The views of Ms. Orlins (a two-time contestant on “Survivor”) were shaped by her decade working as a public defender. She sees the criminal justice system as racist, cruel and unjust, with outcomes that favor the rich and powerful, and has said she would work to “dismantle” it. She has pledged to cut the office in half, and to re-interview everyone working as a prosecutor there to ensure that their views align with her own.

Ms. Orlins has said she would stop the prosecution of all but a handful of misdemeanors and redirect the office’s attention toward white-collar crime. She has also been politically outspoken on Twitter, speaking publicly against powerful figures like Mr. Trump and Gov. Andrew M. Cuomo.

Mr. Quart, a longtime state assemblyman, is the only candidate in the race with political experience. He has cited his record pushing for police accountability in the Legislature as evidence that he will be an effective reformer.

“There’s no guesswork with me,” he said in an interview. “My 10 years in the Legislature should demonstrate to anyone who really wants reform in this office that I’ll be committed to it.”

Though his progressive views are similar to those of Ms. Aboushi and Ms. Orlins, he has billed himself as the most pragmatic candidate on the race’s reformist wing. For instance, he has not pledged to cut the size of the office in half because, he said, it would be an unrealistic promise given the realities of the budget process.