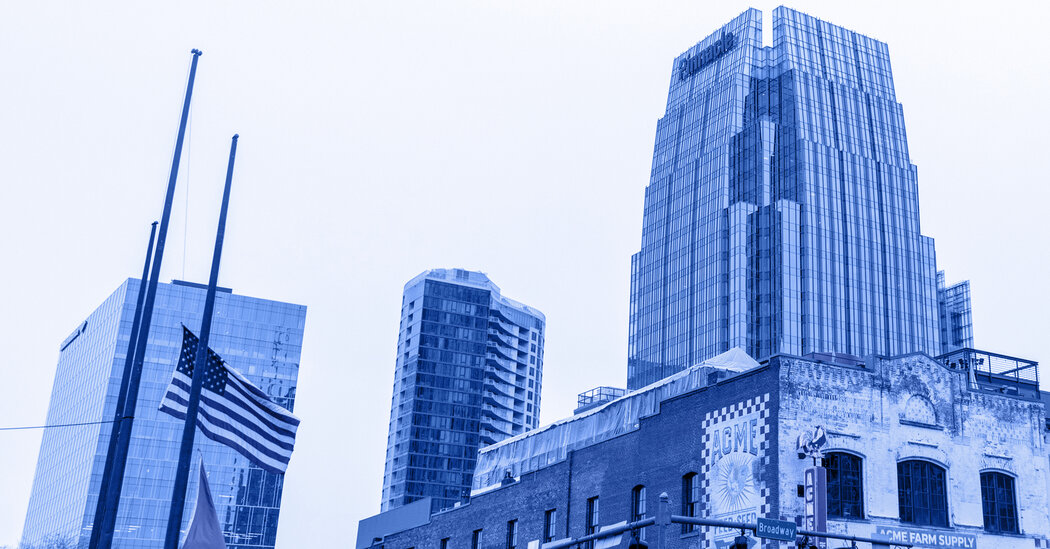 NASHVILLE — When NPR’s tech reporter, Bobby Allyn, tweeted last week that the social media site Parler was moving its headquarters from Nevada to Nashville, a single word came to my mind — a word this newspaper will not publish, no matter that it is the only word in the English language truly appropriate to the situation.

Parler’s chief executive, George Farmer, offered some reasons for moving the company. “Tennessee has great weather, an abundance of Southern hospitality, wonderful music and barbecue,” he wrote in an email announcement. “Even more than that, though, Tennessee shares Parler’s vision of individual liberty and free expression.”

Founded in 2018 as a less regulated alternative to Facebook and Twitter, Parler is an online place where high-profile right-wing commentators and political figures can promulgate lies and conspiracy theories without interference. Though the company notified the F.B.I. about threats of violence in advance of the insurrection on Jan. 6, and has since added algorithms to detect posts calling directly for violence, it was nonetheless Parler’s vision of “free expression” that helped bring about the invasion of the U.S. Capitol by homegrown terrorists.

The craven Republicans running Tennessee might share that vision of liberty, but Nashville definitely does not. Nashville, according to NBC News, is “a big blue dot in a deep red state.” That fact should tell you all you need to know about the relationship between this city and our state government. You likely know this dynamic already because it exists in virtually every major city or college town in every gerrymandered state governed by Republicans: Think Oxford, Miss.; Atlanta, Ga.; Birmingham, Ala.; Lexington, Ky.; Austin, Texas.; Chapel Hill, N.C.

What you might not know is that Nashville is also in the midst of a convulsive identity crisis, unsure whether it wants to remain Music City or become something more like a tech incubator or a health care center or a financial services hub. Or maybe just the place where bridesmaids come to get drunk in the street.

Nashville is doing those things poorly, if at all, and some of the blame for this paralysis can be laid at the feet of state government, which frequently passes pre-emptive laws or issues pre-emptive executive orders designed to tie the hands of Nashville leaders. The very last thing this city needs is to become the headquarters of a social media site favored by the right-wingers who are most poisoned by lies and hatred and fear.

The truth is that high-profile members of the far right have been moving to Middle Tennessee since long before Parler announced its impending relocation. As the Nashville Scene’s Steven Hale noted when the conservative media celebrity Ben Shapiro decided to move the headquarters of The Daily Wire, the media company he co-founded, from Los Angeles to Nashville: “Look, we try hard to ignore these people,” Hale wrote. Nevertheless, here they are.

And it’s not just celebrities who are moving to town. The coronavirus pandemic taught a lot of people that they can work wherever they want to work, and increasingly where people seem to want to work is in a state with no income tax. In my neighborhood alone, we have newcomers from Chicago, Houston, Los Angeles and a bunch of other places I can’t name because I haven’t met the new people yet. A few weeks ago, I overheard a conversation between two new neighborhood children on bicycles. “Are you from Nashville?” the first child asked. “I’m from Des Moines,” the other kid said.

We are hospitable people here in Tennessee, it’s true, and we do have great music and barbecue. But Mr. Farmer should know that Tennessee’s “great weather” includes six of the 18 billion-dollar weather disasters to hit the U.S. this year — catastrophic weather events triggered by a changing climate that many on his site deny exists.

Kara Swisher dissects what matters most, exploring the shifting dynamics of people, politics and power with guests Maggie Haberman and Representative Cori Bush of Missouri.

In addition to its regressive tax structure, it’s the state’s politics that have made Tennessee so attractive to Parler and its ilk: A Vanderbilt University poll conducted last spring found that 71 percent of Tennessee Republicans and 30 percent of Tennessee independents still believe Joe Biden stole the 2020 election. No wonder that Tennessee, like Florida and Texas, has become a huge hub for misinformation.

If you’re the kind of person who would join a social-media site where American citizens planned a violent raid on the Capitol, what’s not to love about a state where one county’s juvenile court can send to jail nearly half of all children brought before it, most of them Black (as Nashville’s NPR affiliate, WPLN, pointed out in a yearlong investigation in partnership with ProPublica)? What’s not to love about a state where a church that uses semiautomatic rifles as part of its worship services is building a new training center and spiritual retreat — a church whose leaders were actually at the Capitol on Jan. 6?

You don’t have to take my word for this. Look at the numbers: Joe Biden won Davidson County in 2020 with almost 65 percent of the vote, “the highest percentage of the city’s votes since Franklin D. Roosevelt in 1944,” Clay Risen pointed out in The Times in August. It’s also greater than the margin by which Donald Trump won Tennessee.

Nashville is wrestling with an identity crisis, yes, but I can promise you that in no version of its future will this city be turning red. You may think that Nashville is just the biggest city in a very red state, Mr. Farmer, but it’s a lot more than that. And if you come here, you’ll find that we are fighting what Parler actually stands for with all we’ve got.

Margaret Renkl, a contributing Opinion writer, is the author of, most recently, “Graceland, At Last: Notes on Hope and Heartache From the American South.”