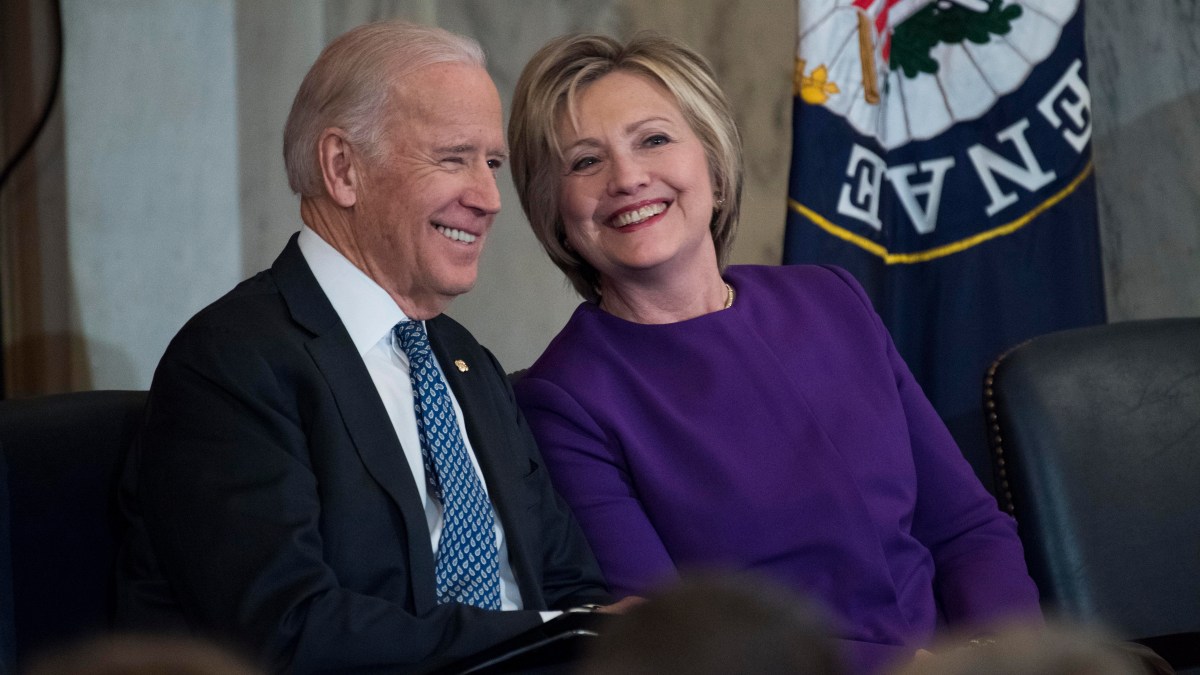 Clinton made her announcement during a Biden campaign town hall to discuss the coronavirus and its effect on women. Without mentioning Donald Trump by name, Clinton assailed the Republican president and hailed Biden’s experience and temperament in comparison.

“Just think of what a difference it would make right now if we had a president who not only listened to the science … but brought us together,” said Clinton, who lost the 2016 election despite leading Trump in the national popular vote. “Think of what it would mean if we had a real president,” Clinton continued, rather than a man who “plays one on TV.”

Biden, as a former vice president and six-term senator, “has been preparing for this moment his entire life,” said Clinton, a former secretary of state. “This is a moment when we need a leader, a president like Joe Biden.”

With her historic candidacy, Clinton remains a powerful — and complex — figure in American life. Her 2016 campaign inspired many women, and her loss to Trump resonates to this day. The female candidates in the 2020 Democratic presidential primary often faced skepticism that a woman could win the White House.

Biden has pledged to select a woman as his vice president.

Given her 2016 experience, Clinton could offer Biden unique insight as he prepares for the November general election. Her endorsement is the latest example of leaders from across the Democratic spectrum rallying behind Biden.

In recent weeks, Biden has picked up support from former President Barack Obama, House Speaker Nancy Pelosi and leading progressives such as Sens. Elizabeth Warren of Massachusetts and Bernie Sanders of Vermont. Hillary Clinton’s husband, former President Bill Clinton, has not yet publicly endorsed Biden and has kept a lower profile during the Trump era.

The swift unification around Biden stands in stark contrast to four years ago, when Hillary Clinton was unable to win over a significant portion of the electorate’s left flank. Sanders battled her to the end of the primary calendar and waged a bitter fight over the party platform before endorsing her and campaigning for her in the fall. Hillary and Bill Clinton have argued that Sanders’ push deeply wounded her campaign against Trump.

The Trump campaign sought to foment the same tension on Tuesday by arguing that the Democratic establishment is again asserting itself.

“There is no greater concentration of Democrat establishment than Joe Biden and Hillary Clinton together,” Brad Parscale, Trump’s campaign manager, said in a statement. “Both of them carry the baggage of decades in the Washington swamp and both of them schemed to keep the Democrat nomination from Bernie Sanders.”

During a wide-ranging conversation, Biden and Clinton sidestepped talk of campaign strategy and tactics, instead sticking mostly to policy proposals and critiques of Trump, from the president’s penchant for conflict to recent reports that he ignored repeated warnings about the coronavirus threat, including in his daily intelligence briefings throughout January.

They pitched themselves as friends, recounting their time together in the Senate and recalling their breakfast meetings at the vice presidential residence when they served in the Obama administration. Still, the Clintons and Biden have never been especially close allies. Biden’s nearest alignment with Hillary Clinton came during Obama’s first term, when Biden was vice president and Clinton was secretary of state. Both had sought the Democratic nomination in 2008 — and both were dogged by their 2002 votes as senators in favor of the war powers resolution that President George W. Bush used to invade Iraq in 2003.

Biden suggested in his 2017 book, “Promise Me, Dad,” that Obama favored Clinton’s 2016 presidential bid over the possibility of Biden running. With Obama by his side, Biden announced from the White House Rose Garden in 2015 that he wouldn’t seek the presidency the following year.

As first lady and secretary of state, Clinton was among the leading voices in women’s rights discussions around the world. She made headlines during her husband’s first term with forceful advocacy for women during a United Nations conference in Beijing, where the Chinese government was under fire for human rights abuses.

“It is time for us to say here in Beijing, and the world to hear, that it is no longer acceptable to discuss women’s rights as separate from human rights,” Clinton said.

The coronavirus pandemic is taking an increasing toll on the nation’s meat suppliers. Last week Tyson’s largest pork plant announced it was suspending operations indefinitely after nearly 200 workers there fell ill. Tyson says millions of pounds of meat will disappear from store shelves until its plants can reopen safely.

Yet Clinton’s advocacy for Biden presents complications. After decades in the spotlight, she’s a polarizing figure criticized for everything from her push for a health care overhaul in the 1990s to her decision to remain in her marriage following her husband’s affair with a White House intern.

Her presidential endorsement comes as a former Senate staffer has recently accused Biden of sexually assaulting her in the 1990s, when he was a senator from Delaware. Trump made Bill Clinton’s affairs an issue during the 2016 campaign despite his own indiscretions and allegations of sexual assault.

Biden campaigned for Hillary Clinton in the fall of 2016, and he’s said often during the 2020 campaign that she “would have made a great president.”

He has nonetheless implicitly criticized her campaign by saying Democrats did a poor job of reaching white working-class voters who defected to Republicans in 2016. As recently as an April 15 fundraiser, Biden touted ability to win “the kind of folks I grew up with,” the “high-school educated” population who believe Democrats have abandoned them, and he sometimes boasts he can carry Wisconsin, Michigan and Pennsylvania — the three states where Clinton’s narrow losses handed Trump an Electoral College majority.

Biden studiously avoided such talk with Clinton at his side Tuesday. “I have to tell you something completely honestly,” he said near the end of their chat. “I wish this were us doing this and my supporting your reelection for president of the United States.”