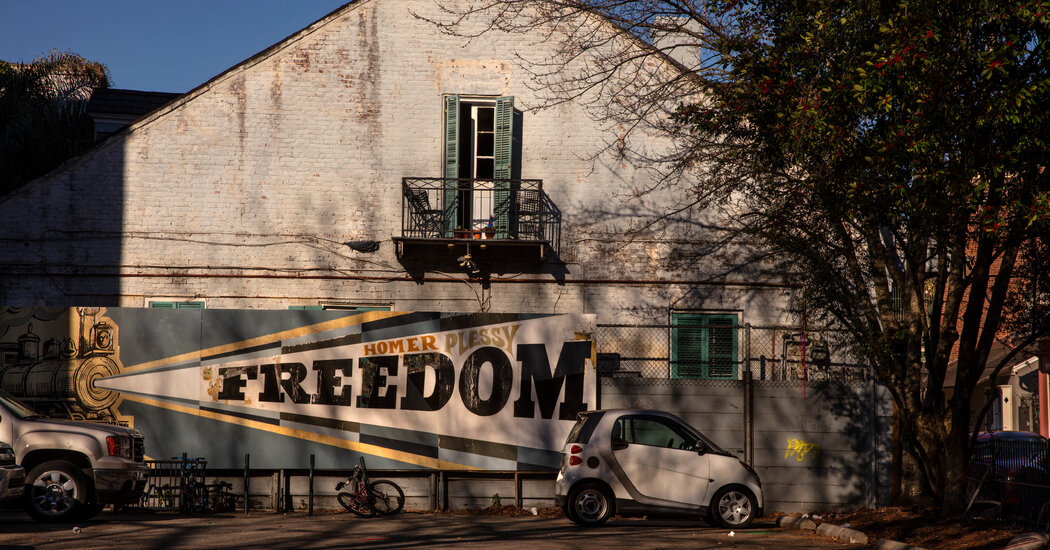 His legacy is tied to a Supreme Court decision that upheld the “separate but equal” doctrine, underpinning laws that segregated and disenfranchised African Americans for decades.

On June 7, 1892, a racially mixed shoemaker from New Orleans named Homer Plessy bought a first-class ticket for a train bound for Covington, La., and took a seat in the whites-only car. He was asked to leave, and after he refused, he was dragged from the train and charged with violating the Louisiana Separate Car Act. He pleaded guilty and was fined $25.

On Friday, nearly 130 years after the arrest, the Louisiana Board of Pardons voted to clear his record.

“There is no doubt that he was guilty of that act on that date,” Jason Williams, the Orleans Parish district attorney, told the board during a brief hearing on Friday. “But there is equally no doubt that such an act should have never been a crime in this country.”

The arrest elevated Plessy into the central figure in a legal battle that reached the U.S. Supreme Court. The landmark ruling that resulted in the case, Plessy v. Ferguson, came to be regarded as one of most shameful decisions in the court’s history as well as one of the most consequential. It endorsed the “separate but equal” doctrine and gave legal backing to the Jim Crow laws that segregated and disenfranchised African Americans in the South for decades.

Officials described pardoning Plessy, who died in 1925, as a way to attempt to rectify wrongs of the past and, beyond that, acknowledge the vast and devastating reach the Supreme Court decision had. Mr. Williams said the racial disparities and discrimination that extended from that ruling ultimately were at the heart of the protests that erupted last year after the death of George Floyd.

“Much of that is based on this Supreme Court ruling and everything that grew from it,” Mr. Williams said in an interview.

The board’s decision was sent to Gov. John Bel Edwards, who will decide whether to grant the posthumous pardon. A spokeswoman for Mr. Edwards said on Friday that he was traveling but “looks forward to receiving and reviewing the recommendation of the board upon his return.”

In making their decision, board officials cited the Avery C. Alexander Act, legislation named for the civil rights leader and longtime member of the Louisiana House of Representatives, which calls for pardoning individuals who had been convicted of violating laws enacted with the purpose of enforcing segregation or discrimination.

The 1890 Louisiana Separate Car Act was precisely that kind of law, part of a flurry of segregationist legislation pursued across the South in an effort to construct a new racist order after Reconstruction.

“It has never been used,” Mr. Williams said of the Alexander Act. “It almost makes you think it was designed for just this moment, for Homer Plessy.”

Plessy had boarded the East Louisiana Railway’s No. 8 train in New Orleans intending to get arrested. He was an activist who was part of a local civil rights group that was infuriated by the Separate Car Act. The group chose Plessy as the one to ride the train because he could pass for a white man.

A conductor asked Plessy if he was “colored,” and he said that he was. When the conductor instructed him to move to a different car, Plessy resisted. After his arrest, the activist group, the Citizens’ Committee to Test the Constitutionality of the Separate Car Act, posted his $500 bond.

His first court appearance came four months later before Judge John Howard Ferguson, who decided not to bring the case to trial, which allowed Plessy’s lawyers to bring an appeal to higher courts. The case continued on for several years before it reached the Supreme Court in 1896. The court ruled against Plessy, 7-1.

The lone dissenter, Justice John Marshall Harlan, wrote: “In respect of civil rights, all citizens are equal before the law. The humblest is the peer of the most powerful. The law regards man as man and takes no account of his surroundings or his color when his civil rights as guaranteed by the supreme law of the land are involved.”

The notion of separate but equal was maintained until the Brown v. Board of Education decision in 1954. In the meantime, Plessy returned to Judge Ferguson’s courtroom, where he entered his guilty plea and was fined. He went on to work as a collector for an insurance company.

In recent years, descendants of both sides of the case joined together to create a foundation, bonding over their shared history and working to educate others on its relevance now. Plessy v. Ferguson, as the descendants like to say, had become Plessy and Ferguson.

“We cannot undo the wrongs of the past, but we can and should acknowledge them and learn from them,” said Phoebe Ferguson, a descendant of Judge Ferguson.

Part of their efforts are amplifying Plessy’s legacy, trying to bring more attention to him and show the link between his efforts as an activist and the nonviolent disobedience of the civil rights movement that came generations later.

“Our ancestor was a civil rights activist even before the term was used,” said Keith M. Plessy, a distant relative of Plessy’s who, with Ms. Ferguson, started the organization, the Plessy and Ferguson Foundation. “I think we promote New Orleans now, we can promote it as the cradle of the modern civil rights movement.”

The board’s decision was thrilling, Mr. Plessy said, adding that he had to strain to hold back tears. But the work was not just a backward-looking endeavor. His and Ms. Ferguson’s efforts, they said, were also about fixing the inequalities and injustices that endure and encouraging others to find common ground, as they did.

“I once met Rosa Parks, and as I kneeled before her and thanked her for all her hard work, she said to me, ‘Get up, boy! Your name is Plessy. You got work to do,’” Mr. Plessy recalled on Friday as he spoke to the board, urging the members to forward his ancestor’s case to the governor. “I’ll admit I didn’t know what she meant then, but I’m sure now, and I’m convinced that she was talking about the work we’re doing today.”