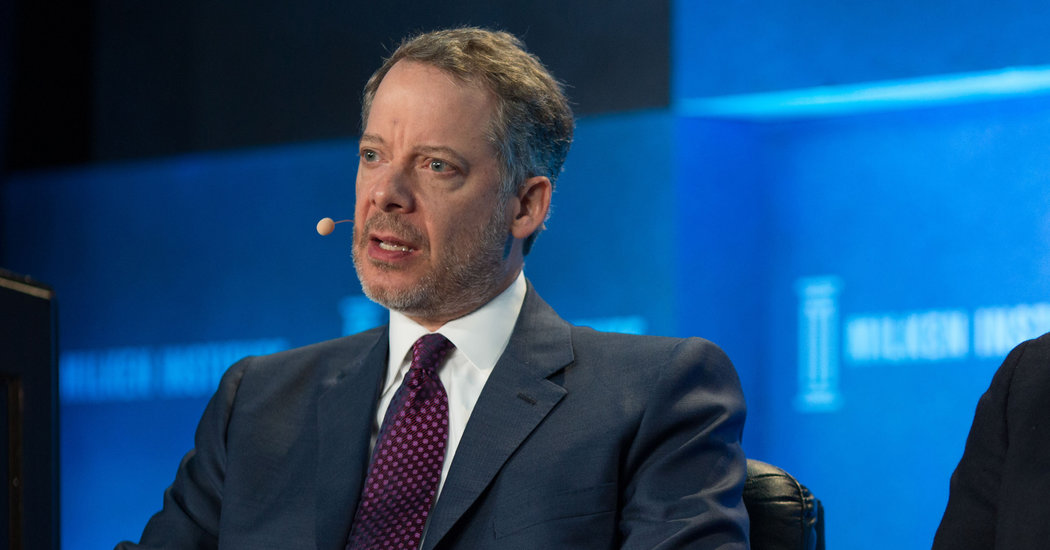 Monty Bennett’s sprawling hospitality company is the biggest known applicant of the government’s small-business relief program. The Texas conservative has remained unwilling to return his loans even as public anger builds over large companies getting the funds — a fact now drawing the scrutiny of a key lawmaker.

Hotels and subsidiaries overseen by Mr. Bennett’s firm, Ashford Inc., have applied for $126 million in forgivable loans from the Paycheck Protection Program. According to company filings, about $70 million of that has been funded. By comparison, the average loan size in the program’s first round was $206,000.

On Friday, Senator Chuck Schumer, the Democratic leader, sent a letter to the Small Business Administration demanding a thorough review of use of the program by Mr. Bennett’s companies, saying that he is “deeply concerned that large, publicly traded companies, like Ashford, may be exploiting” it.

“It is imperative that limited taxpayer dollars go to help legitimate small businesses,” he said in the letter to Jovita Carranza, the small business administrator.

The $660 billion program, the centerpiece of President Trump’s economic rescue package, is intended to help small businesses and their workers stay afloat while quarantines and stay-at-home orders close shops and shutter economic activity.

The low-interest loans are forgivable if companies use most of the money, about 75 percent, to keep staff employed. Ashford has said it expects to only “minimally” meet forgiveness requirements, suggesting it does not plan to use the money to rehire a sufficient share of its staff. The firm did not comment when asked for clarification.

Mr. Bennett’s hospitality empire is one of several big companies that qualified for the program thanks to an intentional loophole that came after a lobbying push from hotel and restaurant companies, Ashford among them. Ashford Inc. oversees a tightly interwoven group of subsidiaries and real estate investment trusts that own and help operate 130 hotels ranging from Ritz Carltons to Embassy Suites. Congress allowed individual restaurants and hotels that belong to bigger companies to tap the program.

After it became apparent that large firms were taking a sizable chunk of the finite funds, the Treasury Department clarified that big companies with access to capital markets should give the money back by May 7, or face a government review. Mr. Bennett has made it clear that he plans to keep the money unless the government tells him otherwise.

“No other programs exist to help larger hotel ownership companies survive the crisis and bring their employees back to work,” the company said in a statement. “We plan to keep all funds received under the P.P.P.”

Ashford added that “any funds for which we are determined to be not qualified will be returned according to the requirements of the program.”

Other major recipients are returning loans. AutoNation, the country’s largest chain of new-car dealerships, said it was giving back $77 million, which it had applied for through dozens of individual dealerships, and Penske Automotive Group received and returned $66 million.

At least 312 public companies received loans worth at least $1.18 billion.

10 of the Largest Loans

Ashford Hospitality and Braemar Hotels and Resorts are controlled by Ashford Inc., and have collectively received $68.8 million in small business loans.·Note: Data as of May 1.·Source: Company reports, securities filings and Sentieo.·By David McCabe and Jeanna Smialek

Ashford’s companies need the loans because they do not have sufficient access to capital markets to raise funds on its own to weather the crisis, Ashford said in its statement. But unlike many small companies that came into the lockdown in decent financial health, Ashford-tied properties were already highly indebted and its three interlinked companies — Ashford Inc. and the real estate investment trusts it advises, Braemar Hotels and Resorts and Ashford Hospitality Trust — had fast-sinking stock prices before coronavirus ever hit.

Mr. Bennett’s companies, whose profits ultimately flow back to him, operate with what experts say is a poor corporate governance structure. The fact that they, and potentially Mr. Bennett, are benefiting from the program is the latest example of how the government’s efforts to keep small businesses afloat have been undercut by its own guidelines.

To Mr. Bennett, a conservative who has donated heavily to Republicans, including supporting Mr. Trump’s 2016 campaign and directly providing more than $150,000 so far to his re-election bid, the money is his fair share.

He has spent years complaining that his taxes are too high in speeches at quarterly internal meetings, according to a former employee who declined to be named for fear of retribution.

When coronavirus struck, tanking the hospitality sector, Mr. Bennett watched in outrage as the government failed to come to its rescue.

“What are all those taxes we paid supposed to provide us with anyway?” he wrote in a March 22 Medium article. “Washington, you’re not ‘bailing me out,’ you’re coming to our aid since you didn’t do your job to begin with, which was to protect us.”

Mr. Bennett has a history of making sure that government works well for him, including bankrolling campaigns for a local Texas politician, Lance Gooden, who was eventually elected to Congress.

When authorities wanted to build a water pipeline on Mr. Bennett’s East Texas ranch — the “Lazy W”— in 2011, Mr. Gooden wrote a state bill designating the property as public land, allowing it to fight back against the easement on the grounds that it was a government entity.

The designation later allowed Mr. Bennett to assert immunity in court. (He also added endangered animals to the property and designated part of it a cemetery to try to stop the pipeline, according to public filings and local media reports.)

As Mr. Gooden set his sights on Congress, Mr. Bennett heavily financed the political action committee that helped him to win, donating hundreds of thousands of dollars through companies he leads.

Since arriving in Washington, Mr. Gooden has continued to advance the hotel magnate’s interests. Mr. Bennett wrote in his late March Medium post that China should be legally liable for originating the coronavirus, which he labeled the “purposeful or negligent” fault of a “semi-hostile foreign nation.”

On April 3, Mr. Gooden proposed legislation that would alter the Foreign Sovereign Immunities Act — the same legislation Mr. Bennett pointed to — and grant the Justice Department the ability to sue China.

Mr. Gooden, asked for comment about his ties to Mr. Bennett and the legislation mentioned in this article, defended the paycheck protection loans to Ashford.

“Outcry by Congress or the administration at this point is manufactured and disingenuous after supporting the same policy a second time last week in the most recent funding bill,” he said in an emailed statement, a reference to the additional $310 billion Congress approved for the small-business program in late April.

Mr. Bennett pushed for the hotel industry to be included in government coronavirus relief, hiring two lobbying firms in March. As The Daily Beast first reported, one explicitly said it would work on “issues related to Covid-19 relief for the hotel industry.” The hotelier appeared on Fox News and wrote online posts asking for action.

Mr. Bennett’s was one voice among many, but the hotel industry as a whole lobbied for a bailout. It eventually settled for a carve-out in the small-business program that would allow individual branches belonging to bigger parent companies to tap forgivable loans.

When the small-business program opened in early April, Mr. Bennett’s employees pulled overnight sessions filing loan applications for the company’s vast network of properties and subsidiaries, according to media reports at the time.

They succeeded at an unmatched scale.

Chains like Shake Shack and Potbelly grabbed headlines for taking the small-business relief money, but Mr. Bennett’s combined firms had applied for nearly 13 times as much funding. The Ashford-tied properties and subsidiaries have already received 339 times more than the average loan from that first round, which was exhausted April 16.

The news stirred a backlash as many small companies missed out on loans entirely, and as some banks prioritized bigger clients. Congress’s second round of funding, which is being parceled out now, looks likely to again run dry, leaving some tiny businesses without help.

Key Bank, which issued most of the Ashford-related loans, said about 10 percent of its applicants did not get funded in the first round. It added that about 90 percent of the loans it issued went to small businesses.

Most of the Ashford-tied loans went to individual hotels, like a Ritz Carlton in Atlanta, which are owned by two real estate investment trusts advised by Ashford Inc. and run by its senior employees. So-called REITs have tax advantages, and generally pay an outside manager to oversee day-to-day hotel operations.

But Ashford Inc. also owns the management company that runs most of the trusts’ hotels, a firm that sells them hypoallergenic room products, and even the room key provider that keeps the doors locked. The end result is that much of the money earned at the Sheraton in Anchorage flows back to the central firm. If the paycheck protection cash can be used to keep up with bills, it could effectively bolster Ashford.

That could, in turn, pay Mr. Bennett. He and his father directly or indirectly own 16 percent of Ashford Inc.’s common stock, which would jump to 70 percent if they converted their preferred shares, based on the company’s 2019 annual filing. Besides earning compensation at both trusts, Mr. Bennett takes dividends on his Ashford Inc. preferred stock holdings and a salary from the company. He was paid $5.7 million by Ashford Inc. alone last year, including 98.6 percent of his maximum potential bonus.

His 2019 incentive salary came even as the larger of the two trusts — Ashford Hospitality Trust — operated at a $113 million loss and saw its stock swoon to just about $1 from about $5.60. It’s now trading around 70 cents.

Mr. Bennett has taken a 20 percent pay cut amid the outbreak, but that reduction is reversible.

A board oversees the company’s operations, but it is filled with people with close ties to Mr. Bennett, including one director whose wife’s firm provides services to the company. Mr. Bennett recently married former board member Sarah Zubiate Darrouzet. A former Texas politician, Matt Rinaldi, to whom Mr. Bennett had donated, sits on one of the real estate investment trusts’ board.

“The executive pay arrangements reflect a substantial disconnect between pay and performance, and raise serious corporate governance concerns,” said Lucian A. Bebchuk, director of the Program on Corporate Governance at Harvard Law School.