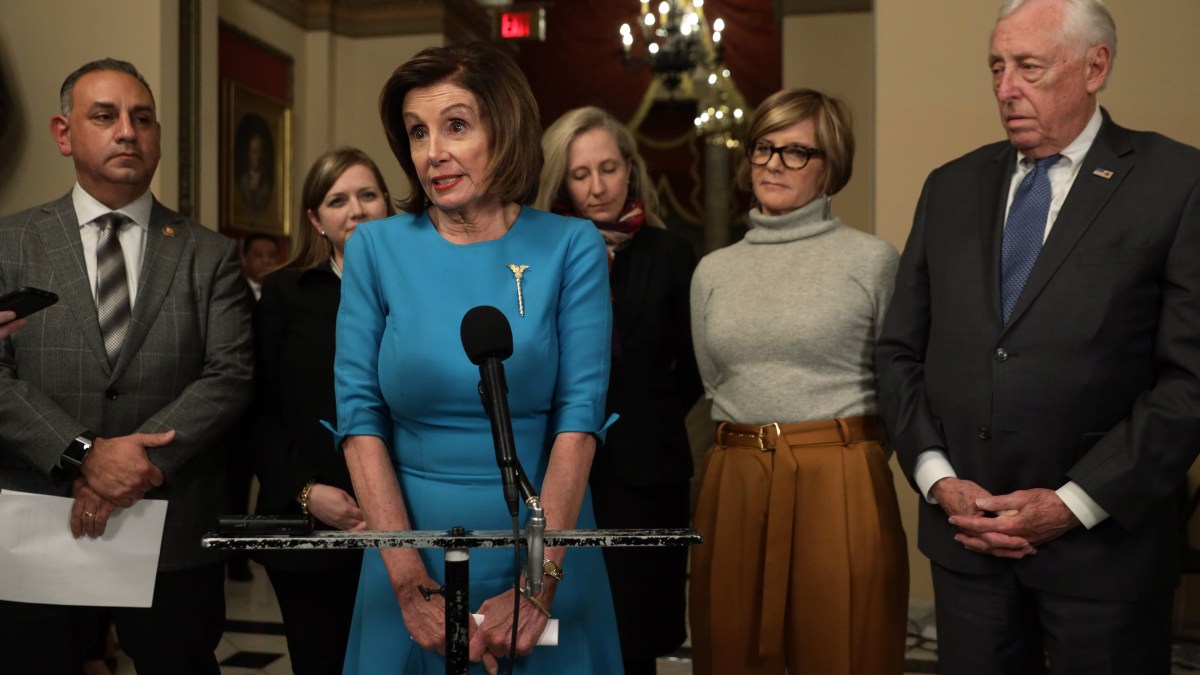 President Donald Trump on Friday declared the outbreak a national emergency, freeing up money and resources to fight it, then threw his support behind the congressional aid package.

From the Rose Garden, Trump said, “I am officially declaring a national emergency,” unleashing as much as $50 billion for state and local governments to respond to the crisis.

Trump also announced a range of executive actions, including a new public-private partnership to expand coronavirus testing capabilities with drive-through locations, as Washington tries to subdue the new virus whose spread is roiling markets, shuttering institutions and disrupting the lives of everyday Americans.

But he denied any responsibility for delays in making testing available as his administration has come under criticism for being too slow to respond.

Trump said, “I don’t take responsibility at all” for the slow rollout of testing.

“We did what we said we were going to do: Put families first,” said Pelosi, flanked by Democratic lawmakers, including many freshmen. House debate on the bill began after midnight.

Trump’s tweet of approval instilled fresh energy in the package, all but ensuring that wary Republicans would join with a robust vote.

“I encourage all Republicans and Democrats to come together and VOTE YES!” He added, “Look forward to signing the final Bill, ASAP!”

The crush of late-day activity capped a tumultuous week in Washington as the fast-moving virus left ordinary Americans suddenly navigating self-quarantines, school closures and a changed way of life.

During a press conference announcing the declaration of a National Emergency with Coronavirus, President Donald Trump was seen shaking hands with multiple business leaders.

The White House was under enormous pressure, dealing with the crisis on multiple fronts as it encroached ever closer on the president.

Trump has been known to flout public health advice — and was eagerly shaking hands during the more than hour-long afternoon event — but acknowledged he “most likely” will be tested soon after exposures to individuals who have tested positive for the virus. The White House physician indicated later his interactions were low-risk and testing is not necessary.

President Donald Trump was asked about his administration’s decision to disband the pandemic office housed within the NSC during Friday’s press conference at the White House.

Additionally, Trump took a number of other actions to bolster energy markets, ease the financial burden for Americans with student loans and give medical professionals additional “flexibility” in treating patients during the public health crisis.

“Through a very collective action and shared sacrifice, national determination, we will overcome the threat of the virus,” Trump said.

Central to the aid package from Congress, which builds on an emergency $8.3 billion measure approved last week, is the free testing, sick pay and family leave provisions.

Providing sick pay for workers is a crucial element of federal efforts to stop the rapid spread of the infection. Officials warn that the nation’s healthcare system could quickly become overwhelmed with gravely sick patients, as suddenly happened in Italy, one of the countries hardest hit by the virus.

The ability to ensure paychecks will keep flowing — for people self-quarantining or caring for others — can help assure Americans they will not fall into financial hardship. The legislation also offers three months of paid family and medical leave. Small and mid-sized employers will be reimbursed through tax credits.

Pelosi negotiated the deal with Treasury Secretary Steven Mnuchin in days of around-the-clock negotiations with cross-town phone calls, even as Trump was speaking at the White House.

Voting in the Senate is not yet set, with senators out of town for the weekend. But Senate Leader Mitch McConnell canceled a plan recess week and senators were scheduled to return Monday. He said he expects most senators will want to “act swiftly.”

Both Mnuchin and Pelosi, who said she did not speak directly to Trump during the negotiations, promised a third coronavirus package will follow soon, with more aggressive steps to boost the U.S. economy, which economists fear has already slipped into recession.

The financial markets closed on an upswing after one of the worst nosedives since the 1987 downturn.

Treasury Secretary Steve Mnuchin talks about the impact coronavirus has had on the economy and what he expects moving forward.

The vast majority of people recover. According to the World Health Organization, people with mild illness recover in about two weeks, while those with more severe illness may take three to six weeks to be over it.

Trump said he was gratified that Brazilian President Jair Bolsonaro tested negative for the virus, after the pair sat next to each other for an extended period of time last weekend at Trump’s Mar-a-Lago club. A senior aide to Bolsonaro tested positive.

The White House physician said in a memo late Friday that Trump was also exposed to a second guest at the club who has since tested positive for the virus. Still despite the incidents, the physician said Trump had only “LOW risk” interactions and testing “is not currently indicated.”

Attorney General William Barr, who also met with the Australian official, stayed home Friday, though he “felt great and wasn’t showing any symptoms,” according to his spokeswoman Kerri Kupec.

Several lawmakers, including some close to Trump, have also been exposed to people who tested positive for the virus, and are self-isolating.

A Connecticut man living in New York says he was waiting to board a flight to Sweden Wednesday evening when friends started texting and calling him. President Donald Trump had just announced a 30-day travel ban for flights from Europe.

Among them are Republican Sens. Lindsey Graham and Rick Scott, who were at Trump’s club on the weekend. Graham announced Friday that he also met with the Australian official who has now tested positive. And GOP Sen. Ted Cruz of Texas, who had previously isolated himself after a potential exposure at a conservative conference in Washington, said Friday he met with a Spanish official and is now self-quarantining.

Hospitals welcomed Trump’s emergency declaration, which they and lawmakers in Congress had been requesting. It allows the Health and Human Services Department to temporarily waive certain federal rules that can make it harder for hospitals and other health care facilities to respond to an emergency.

Dr. Anthony Fauci, infectious disease chief at the National Institutes of Health, said more tests would be available over the next week, but warned, “We still have a long way to go.”

NBCLX’s Clark Fouraker caught up with Dr. Daniel J Barbaro from the Texas Centers for Infectious Disease Associates to examine the spread of the coronavirus using the board game “Pandemic.”