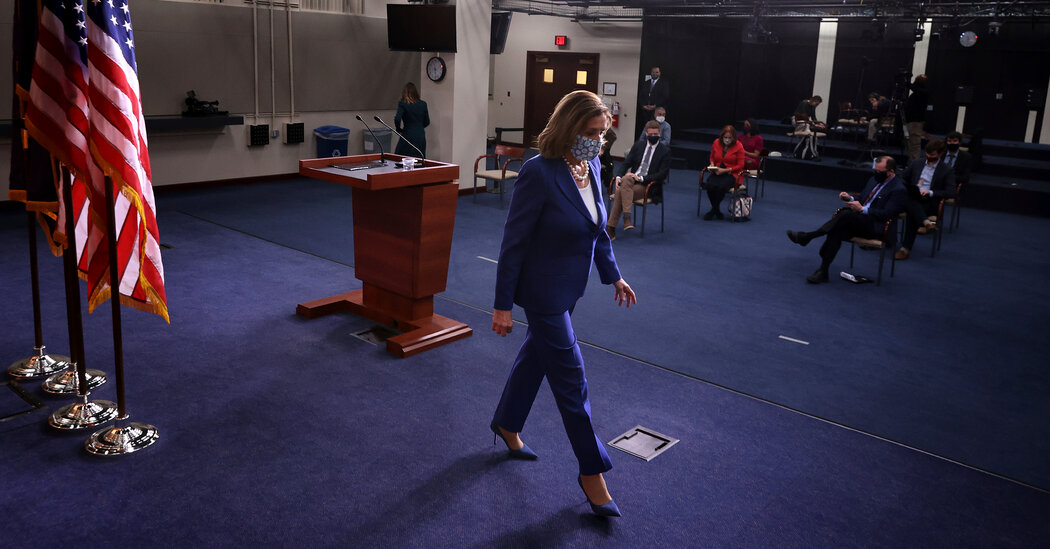 The measure is likely to become the subject of negotiations later in the year over government spending and debt.

WASHINGTON — The House voted on Friday to avert an estimated $36 billion in cuts to Medicare next year and tens of billions more from farm subsidies and other social safety net programs, moving to stave off deep spending reductions that would otherwise be made to pay for the $1.9 trillion stimulus bill enacted last week.

The action, opposed by the vast majority of Republicans, would effectively exempt President Biden’s pandemic aid package from a deficit-reduction law that requires that all spending be offset by automatic, across-the-board cuts to certain government programs. It passed by a vote of 246 to 175, with 29 Republicans joining Democrats to support it.

In passing the virus aid plan, Democrats used a fast-track budget process to push past Republican opposition, arguing that urgent needs brought on by the pandemic outweighed concerns about running up the national debt. But the maneuver meant that Congress had to act separately to prevent the automatic cuts, which would go into effect in January if lawmakers do not act.

Democrats remained confident that, even though they opposed the stimulus package, Republican senators would eventually support legislation to avoid cutting Medicare, farm subsidies and social services block grants to pay for it. But the debate was a chance for members of both parties to make their dueling cases about the government’s spending priorities after the enactment of one of the most expansive federal rescue packages in modern times.

In remarks on the House floor, Representative John Yarmuth of Kentucky, the chairman of the Budget Committee, described the bill as “a loose end we have to tie up before our work is finished.” He argued that the legislation would place the stimulus law on equal footing with previous pandemic relief bills passed during the Trump administration. All of those bills were approved with overwhelming bipartisan majorities and waived the requirement for corresponding spending cuts.

The vote margin signaled that the waiver legislation could become the subject of negotiations later in the year, as lawmakers approach a deadline to address the debt ceiling and the dozen spending bills needed to keep the government funded. It is unclear when the measure will be taken up in the Senate, where 10 Republicans would have to join Democrats for it to become law. Similar waivers have repeatedly been approved regardless of party.

The politically unpopular specter of drastic Medicare cuts during a pandemic is likely to prod lawmakers to a deal before the year is out.

“Very few of them would actually want the pay-go sequester to hit,” said Marc Goldwein, a senior vice president at the Committee for a Responsible Federal Budget, a group that urges fiscal restraint. Mr. Goldwein predicted that Republicans were likely to eventually vote for a waiver, as part of a larger deal. “They may try to get something in return for it.”

The debate over paying for the stimulus stems from a 2010 law called the Statutory Pay-as-You-Go Act that requires certain deficit spending to be automatically offset by cuts to federal programs. Typically, when Congress has wanted to spend big, it has also voted to ignore that rule. But because the recent pandemic relief bill was passed using a special budget process known as reconciliation, a waiver could not be included.

The Congressional Progressive Caucus has called for the law to be ended to avoid the automatic cuts.

The stimulus payments would be $1,400 for most recipients. Those who are eligible would also receive an identical payment for each of their children. To qualify for the full $1,400, a single person would need an adjusted gross income of $75,000 or below. For heads of household, adjusted gross income would need to be $112,500 or below, and for married couples filing jointly that number would need to be $150,000 or below. To be eligible for a payment, a person must have a Social Security number. Read more.

Buying insurance through the government program known as COBRA would temporarily become a lot cheaper. COBRA, for the Consolidated Omnibus Budget Reconciliation Act, generally lets someone who loses a job buy coverage via the former employer. But it’s expensive: Under normal circumstances, a person may have to pay at least 102 percent of the cost of the premium. Under the relief bill, the government would pay the entire COBRA premium from April 1 through Sept. 30. A person who qualified for new, employer-based health insurance someplace else before Sept. 30 would lose eligibility for the no-cost coverage. And someone who left a job voluntarily would not be eligible, either. Read more

This credit, which helps working families offset the cost of care for children under 13 and other dependents, would be significantly expanded for a single year. More people would be eligible, and many recipients would get a bigger break. The bill would also make the credit fully refundable, which means you could collect the money as a refund even if your tax bill was zero. “That will be helpful to people at the lower end” of the income scale, said Mark Luscombe, principal federal tax analyst at Wolters Kluwer Tax & Accounting. Read more.

There would be a big one for people who already have debt. You wouldn’t have to pay income taxes on forgiven debt if you qualify for loan forgiveness or cancellation — for example, if you’ve been in an income-driven repayment plan for the requisite number of years, if your school defrauded you or if Congress or the president wipes away $10,000 of debt for large numbers of people. This would be the case for debt forgiven between Jan. 1, 2021, and the end of 2025. Read more.

The bill would provide billions of dollars in rental and utility assistance to people who are struggling and in danger of being evicted from their homes. About $27 billion would go toward emergency rental assistance. The vast majority of it would replenish the so-called Coronavirus Relief Fund, created by the CARES Act and distributed through state, local and tribal governments, according to the National Low Income Housing Coalition. That’s on top of the $25 billion in assistance provided by the relief package passed in December. To receive financial assistance — which could be used for rent, utilities and other housing expenses — households would have to meet several conditions. Household income could not exceed 80 percent of the area median income, at least one household member must be at risk of homelessness or housing instability, and individuals would have to qualify for unemployment benefits or have experienced financial hardship (directly or indirectly) because of the pandemic. Assistance could be provided for up to 18 months, according to the National Low Income Housing Coalition. Lower-income families that have been unemployed for three months or more would be given priority for assistance. Read more.

The Congressional Budget Office, in a letter to Representative Kevin McCarthy of California, the minority leader, estimated that without the waiver enacted before the end of the calendar year, $36 billion would be cut from Medicare spending — 4 percentage points — in 2022 alone and billions more from dozens of other federal programs. Many mandatory spending programs could be completely defunded, including social services block grants, a Justice Department program that provides aid to crime victims, and the Black Lung Disability Trust Fund.

Waiver bills of this sort have typically been passed in time to avoid major cuts. In 2017, after Republicans passed their $1.5 trillion tax cut, also using the budget reconciliation process, many Democrats voted to prevent automatic spending reductions as part of a year-end funding bill.

“We need to be working together, as we did for you when you were giving tax cuts to the wealthiest Americans,” Representative Jan Schakowsky, Democrat of Illinois, said in a comment directed at Republicans.

Republican lawmakers criticized Democrats for having created their own problem, arguing that there would be no need for a separate vote to avert the cuts if the stimulus plan had been bipartisan.

Conservatives see the confrontation as an opportunity to criticize overspending by the Democrats.

“I do think it would be irresponsible to not do something to address the level of overspending,” said Matthew Dickerson, the director of the Grover M. Hermann Center for the Federal Budget at the Heritage Foundation. He said Republicans should use the looming cuts as leverage to pressure Democrats to agree to new measures to reduce federal spending.